Monoclonal antibodies (MAbs) are an important class of biopharmaceuticals and are widely used to treat a variety of diseases such as cardiovascular diseases, cancer, and blood disorders. Antibodies are very complex proteins that show a high degree of microheterogeneities, including charge-, hydrophobicity- and size-related variances (1). Such variants can arise during any stage in a manufacturing process or storage as a result of enzymatic or nonenzymatic processes (2). Particular antibody variants that may affect the in vitro and in vivo properties of a molecule must be identified and minimized in a final product. Hence the analysis and understanding of microheterogeneity of a final product is a key challenge during development and manufacturing. 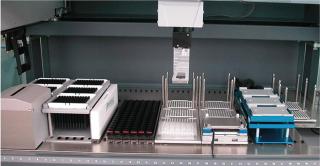 Those charge-related antibody isoforms can be separated and assessed by semipreparative weak cation-exchange (WCX) chromatography. Each peak from such a chromatographic separation can be collected and characterized by mass spectroscopy (MS). Surface plasmon resonance spectroscopy can provide further characterization of binding activity and function. Based on results of structural and functional studies, antibody isoforms can be classified as a product-related impurity if an impact on stability, function, or even immunogenicity can be observed (5). For the desired product quality, the isoform profile of an antibody product can be modulated by depleting charge-related variants through carefully planned and executed chromatography steps (Figure 1). 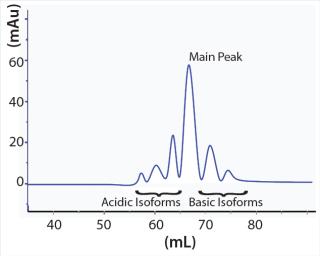 We describe a resin screening approach to develop a chromatographic purification step to modulate the charge-related antibody isoform pattern within a 96-well microplate. We focused on the depletion of basic antibody isoforms by using commercially available cation-exchange (CEX) resins. Our goal was to reduce the level of variants in our model antibody product by 10% from the load material. We carried out chromatography screenings on our fully automated protein purification platform (RAPPTor) shown in Photo 1(6). This approach enables us to carry out a fast and efficient evaluation of promising chromatography resins to systematically deplete critical antibody isoforms. We also successfully transferred process parameters (identified on the robotic platform) to a standard column-based chromatography process yielding the desired levels of charge-related isoforms.

We evaluated 11 CEX resins for their depletion of critical basic antibody isoforms. To screen for initial binding and elution parameters, we performed 96-well resin screenings on our RAPPTor platform, facilitating an efficient and fast procedure for screening a large experimental space. Filter plates were filled with 25-µL resin each. We used 50 mM sodium acetate and sodium phosphate as buffers. All buffer steps (equilibration, wash, elution, and regeneration) were applied and incubated twice before elution by centrifugation. We loaded chromatography resins with 30 mg antibody per milliliter of resin and incubated them on a plate shaker for 20 minutes (6, 7). We determined the yield of all fractions using UV measurement at 280 nm in a plate reader. Promising elution fractions with a 60–100% yield were analyzed using WCX high-performance liquid chromatography (HPLC) to quantify the content of the early eluting acidic isoforms, main form, and late-eluting basic antibody variants.

Figure 2 shows experimental set-up from the initial microplate screening, which covers a broad range of typically used elution conditions in CEX chromatography. We consistently used 50 mM sodium acetate pH 5.0 with 40 mM sodium chloride for protein binding. Elution buffers varied from pH 5.0 to 7.1 and 40–320 mM NaCl to guarantee elution of model antibody from all CEX resins. On the basis of those results, we performed a second screening to refine the elution conditions for each resin. After defining parameters for an acceptable yield and high depletion of basic isoforms, we transferred the promising elution conditions to 1-mL chromatography columns to evaluate depletion of critical antibody isoforms at a larger scale. 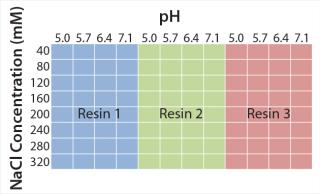 We investigated the depletion of basic antibody isoforms for a number of CEX resins in two microplate resin screenings. The screening approach presented here illustrates the experimental procedure for the POROS HS 50 resin, but it can be applied for any commercially available CEX resin.

At first, we performed a broad, initial batch screening on the robotic platform to define an acceptable elution range for our model protein. Figure 3 shows the proportionate yields in all screening fractions from the initial screening with the POROS HS 50 resin.

We analyzed elution fractions with eligible yields using WCX HPLC to assess the antibody isoform pattern. Figure 4 correlates the content of basic isoforms of the load, the measured elution fractions (pool of Elution 1 and Elution 2) with the corresponding yields. With certain elution buffers, the basic isoform content could be depleted from 39% to 35% with a total yield of 80%. On the basis of our first promising results, we conducted a second screening with a refined elution range using a design of experiments (DoE) approach to generate a statistical model demonstrating the depletion of basic isoforms. The optimized elution range (pH/NaCl) of the second resin screening (Figure 5) offers more detailed information about the elution behavior of each resin. To reach our goal of depleting the basic isoform content by 10%, we had to accept a compromise in total yield. So we focused on elution conditions resulting in a total yield of 70–90%.

Figure 6 summarizes the second, refined screening of our model protein with the POROS HS 50 resin. The center point of our DoE (n=4; pH 5.5, 120 mM NaCl) verifies the high reproducibility of the screening approach. Overall, the elution buffers providing a yield of ∼80% deliver a depletion of basic isoforms from 40% (load) to ∼36% (elution fraction).

We generated contour plots to visualize the performance of SP Sepharose HP and POROS HS 50 resins (Figure 7). Our plots indicate the yields and basic isoform contents for every given pH value and NaCl concentration within the applied design space. A higher pH value and an increasing NaCl concentration leads to higher yield but also to higher content of basic isoforms. 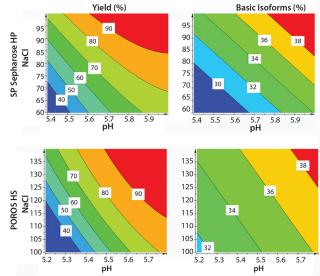 Figure 8 summarizes all collected CEX data for comparison and ranking of all tested resins in one diagram. The plot illustrates — by trend of the linear regression curves (continuous lines) — which selected resins would be better suited to deplete critical basic antibody isoforms. Comparing the slope of the linear regression curves enables easy selection of promising resins for further experiments. In our case, chromatography resins with larger particle sizes show a lower depletion of basic isoforms compared with those having medium or small particle sizes. That fits very well with what the theory would predict. 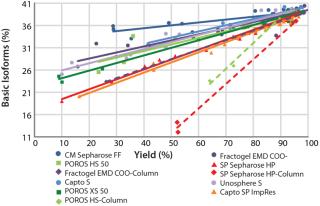 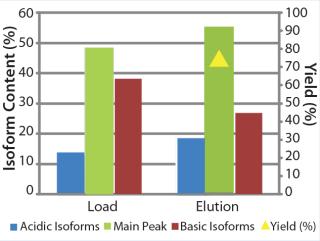 Table 1: Buffers and parameters for column experiments on a 1 mL POROS HS 50 column

Table 1: Buffers and parameters for column experiments on a 1 mL POROS HS 50 column ()

We generated more data points by using harsher or milder elution conditions, also determined within the microplate resin screenings. We observed a shift of the linear regression curve of the POROS HS 50 resin to the lower right corner. To confirm this trend, we investigated other CEX resins (Fractogel EMD COO- and SP Sepharose HP) using the same approach, observing the same trend for all resins. All three CEX resins show a higher depletion of basic isoforms at the same yield in column experiments compared with the microplate resin screenings. Although the total values determined in our batch-mode screenings (continuous lines) clearly differed from the column experiments (dashed lines), the ranking of resins by their performance to deplete basic isoforms could be very well predicted.

Because of the complex and lengthy upstream and downstream manufacturing process of MAbs, control and maintenance of a desired product quality of a molecule is a true challenge. Modulating and specifically depleting charge-related antibody isoforms is important to quality and process development of MAbs. We evaluated an efficient strategy for the development of a chromatographic purification step to systematically deplete the critical basic variants of our model antibody. We demonstrated the effectiveness of high-throughput, 96-well resin screenings to evaluate CEX resins and definition of process parameters.

Despite differences in total depletion of basic isoforms and yield, the ability of a chromatography resins to deplete charge-related variants could be well predicted by using the robotic platform because results from both scales could be very well correlated. Thus, our screening approach facilitates rapid and easy ranking of chromatography resins and purification parameters to manipulate product quality within just a few days. This is a very useful finding because it allows selection of promising chromatography resins at an early development phase, which saves time and material compared with conventional column experiments. The evaluation of chromatography resins depleting acidic antibody isoforms can be performed the same way.