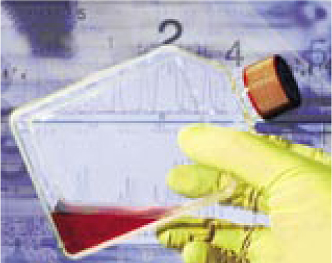 Statistical tools such as analysis of variance (ANOVA) and chemometrics are commonly used in analyzing cell culture performance. Chemometric tools such as principal component analysis (PCA), partial least squares (PLS), and soft independent modeling of class analogy (SIMCA) can be used to analyze a large number of variables together, so they are effective in situations that involve multistage operations, multiple raw materials, and large datasets (2,3,4). These tools have been applied for process control and variability analysis in bacterial and mammalian cell culture processes, but they lack the mechanistic details associated with complex biological systems (5). Here, we describe a multivariate mathematical tool that fits cell culture performance parameters to mathematical models that are mechanistic in nature and can thus be used to identify the most critical raw material in a cell culture process.

We used three mechanistic mathematical models for our mathematical analysis: cooperative, additive, and substitutive. These represent the generalized forms of interactions that occur in biological systems (6, 7).

Algorithm of the Mathematical Analysis: Figure 1 shows the algorithm we developed to correlate titers with raw material use. It comprises three steps: parameter estimation, calculation of individual raw material contributions, and determination of correlation coefficients. 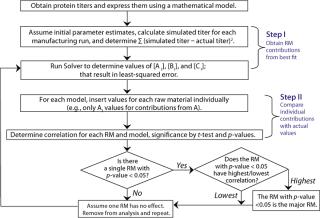 Using the Solver function in Microsoft Excel, parameters Ai, Bi, and Ci were estimated for the least-squared error between simulated and actual titers in individual mathematical models. Those parameters were inserted into their corresponding models, one raw material at a time (e.g., only Ai parameters inserted for contribution from raw material A, and so on), to determine relative contributions from each. We determined correlation coefficients between the individual raw material contributions and titers at manufacturing scale for each of our three mathematical models. Then we tested those correlation coefficients against the hypothesis of no correlation using t-test at a 0.05 significance level.

For each mathematical model, we compared significant correlation coefficients with each other and determined p-values (8). The critical raw material was identified in each case based on associated statistical significance (p < 0.05).

For results reported here, we applied the cooperative model to determine the effect of raw materials on cell culture performance at commercial manufacturing site 1. Similar analysis was conducted at commercial manufacturing site 2, which involves raw material blending (data not shown). The mathematical tool was successfully applied to situations involving such lot blending. Parameters Ai, Bi, and Ci were weighted for estimation according to raw material use. Results obtained from additive and substitutive models at both sites were identical to those from the cooperative model.

During production of a recombinant protein at two commercial manufacturing
sites, an upward drift in protein titers was simultaneously observed (Figure 2). It happened simultaneously at two independent commercial manufacturing sites with no process or equipment modifications made, so raw materials were suspected to be the cause. Analysis of cell culture media at both sites revealed the use of three multicomponent raw material formulations (A, B, and C). Because of their complexity, they were identified as likely root causes for the protein titer variations. Below we discuss methods for identifying which formulation is responsible. A raw material lot-blending strategy was used at site 2, whereas single lots of each raw material were used during each manufacturing run at site 1. The blending done at site 2 made it difficult to conduct a simple statistical analysis, and ANOVA applied at site 1 gave inconclusive results (data not shown). 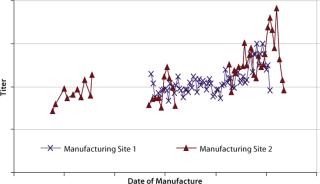 Mathematical Analysis of Cell Culture Performance: Protein titers at commercial manufacturing site 1 were fitted to the cooperative mathematical model, and parameters Ai, Bi, and Ci were obtained based on least-squared error using the Solver function in Microsoft Excel. For parameter estimation, we used KA = KB = KC = 0.1, and Tmax was chosen as a value close to the historical maximum titer. Analytical results remained unchanged when the K and Tmax values were changed. Initial parameter estimates were taken as 0.01; the results did not change for estimates between 0.001 and 0.1. Figure 3 shows protein titers and simulated titers obtained from the best fit for the cooperative model. 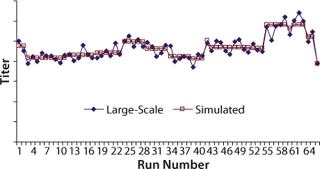 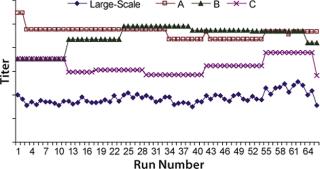 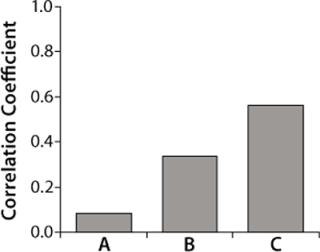 Because raw material A had no significant correlation with titers based on the t-test, we repeated our analysis without it. Figure 6 shows correlation coefficients for this second analysis. Raw materials B and C had t-values of 1.5 and 7.4, respectively. So we determined that only raw material C is positively correlated to titers at commercial manufacturing scale (t-value > 2.0). Thus, raw material C has more effect on protein productivity than materials A and B. Analysis conducted at commercial manufacturing site 2 also showed C as the most critical raw material in the cell culture process. 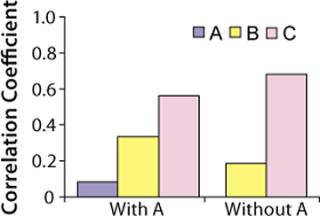