Single-use bioprocessing equipment has come to thoroughly dominate precommercial biopharmaceutical production in only a decade. Yet even with this breakthrough, performance and cost pressures on biopharmaceutical facilities continue to grow. Demands for greater productivity, more efficiency, and lower costs are resulting in an unrelenting push for upstream improvements. Some people in the industry are predicting that perfusion bioreactor technologies may be the next revolution in bioprocessing (1). Perfusion may possibly become a dominant single-use bioreactor technology, with fed-batch systems taking the position as a well-proven but legacy technology. As the technology evolves, researchers are finding that perfusion may offer a number of cost and performance advantages.

Data from the 2011 8thAnnual Report and Survey of Biopharmaceutical Manufacturing Capacity and Production report comes from 352 bioprocessing professionals, showing that biopharmaceutical companies have uniformly increased their budgets in essentially all areas related to bioprocessing (2). Survey data also indicate that industry professionals are becoming impatient with an apparent lack of innovation in bioprocessing equipment, notably in bioreactor offerings, and that much of the industry remains unaware of recent advances in perfusion bioreactors. Results indicate that the industry is both seeking improvements in productivity and aggressively increasing budgets to invest in and adopt new technologies, particularly for up- and downstream bioprocessing (Figure 1). 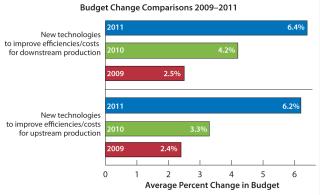 Significant advances in clinical- and commercial-scale bioreactors have occurred in recent years, especially in single-use/disposable bioreactor-based systems. Nearly all these innovations have involved fed-batch bioreactors, usually those with plastic bags/liners dropped within a conventional fed-batch stainless steel bioreactor. Most larger bioreactor manufacturers have made substantial investments in this first-generation bag-in-a-bioreactor approach, including constructing bag-making facilities. Although the approach works, some critics point to a lack of motivation to develop novel alternative technologies.

Our annual study data indicate that the industry wants more innovations in bioreactors. Single-use bioreactors ranked along with purification as the areas in which bioprocessing innovations are most needed, with 29.2% of respondents citing bioreactors. Bioreactors were also reported as taking up the single largest portion of companiesâ€™ average âˆ¼$1 million 2011 bioprocessing budgets. This includes an average of $168,000/year for purchase of single-use bioreactors, with contract manufacturing organizations (CMOs) reporting spending an average of $260,000 and product developers reporting $147,000. Interest in new and improved bioreactors also differed from region to region, with the highest interest (32.2%) in Europe compared with 26.9% for the United States and 31% for rest-of-the-world respondents.

Among separately surveyed suppliers/vendors, single-use bioreactors was the area in which the largest portion of respondents (40.5%) reported working on new technologies and products. Thus, innovations in bioreactors can be expected. Although most major players do not discuss their R&D, it can be presumed that the majority of established bioreactor manufacturers are at least considering, if not actively working on perfusion bioreactors.

With fed-batch bioreactors, cells are cultured using media-filled bioreactors and harvested in batches after (for example) eight to 21 days. By contrast, perfusion bioreactors involve continuous culture, feeding, and withdrawal (harvesting) of spent media generally for much longer periods, even months. Cells are held within the latter either by being bound to grow on capillary fibers or other membranes or retained in the bioreactor though use of special filtration systems, such as Xcellerex’s centrifugation or Refine Technology’s filtration units that can be added to most stirred-tank bioreactors (3).

Unlike batch-fed systems, perfusion systems accumulate no waste products. Expressed proteins are rapidly removed and made available for purification â€” a significant advantage with proteins prone to instability. The cost of a batch failure with perfusion also tends to be much lower. If contamination is found, earlier unaffected harvests are still usable; and if contamination occurs early, then relatively small amounts of media and effort are wasted. Conversely, the whole batch must be discarded if failure occurs in a fed-batch process. Once established, bioprocessing with perfusion bioreactors can in many cases be simpler and experience fewer failures. Also, in perfusion systems with cells bound to a solid substrate, cells grow more naturally and with less traumatic mixing/agitation and shear. That allows perfusion to provide recombinant proteins and antibodies that are purer, more like native proteins, and more consistent in their biological activities (for example, having fewer variations in glycosylation) than when they are produced in fed-batch bioreactors.

Perfusion in the Marketplace

Some systems involve filtration to retain suspended cells in the bioreactor, whereas others are more like classic perfusion bioreactors and involve binding cells to capillary fibers or membranes. These solid-substrate systems can offer advantages over filtration systems added to conventional bioreactors: higher cell densities, lower or no shear, lower apoptosis rates, and lower contamination from cell degradation products. Further, as with the FiberCell and ZellWerk systems, hollow fibers can selectively remove and concentrate a desired product. Companies such as Refine Technology offer filtration systems that can be added on to many or most stirred-tank bioreactors, so that even fixed, stainless steel bioreactors can be adapted to perfusion.

Despite using a smaller bioreactor, perfusion generally provides quantities of product comparable to fed-batch manufacture. For example, CMC ICOS Biologics (Bothell, WA), a CMO offering both perfusion and batch-fed manufacturing expertise, has reported studies comparing the two methods, with results clearly favoring perfusion in many respects (4). However, despite its advantages, perfusion has yet to capture significant market share and cut into the market for fed-batch bioreactors.

Industry Perspectives â€”Rooted in the Past

BioPlan survey data has shown that industry perceptions and attitudes toward perfusion remain rooted in the past. Given a list of 17 problems commonly encountered in bioprocessing, respondents consistently rated all of these as significantly more serious concerns with perfusion than with batch-fed systems â€” even though this is often contrary to the state of the art. This includes concerns about

Current marketed recombinant proteins and MAbs are reported as manufactured using perfusion bioreactors, include Kogenate (Factor VIII) from Bayer Schering; ReoPro (anti-platelet MAb and Remicade (tumor necrosis factor MAb) from Centocor/J&J; Campath (CD52 MAb) from Genzyme/Sanofi; and Xyntha/ReFacto (a modified Factor VIII) from Wyeth/Pfizer, with most of these approved in the 1990s (5). So although some regulatory issues remain, adoption of more advanced perfusion technology should not involve serious regulatory issues. In the present environment, with regulators demanding increased assurance of safety and companies perpetually seeking cost-savings, perfusion may eventually become the preferred technology for manufacture of biopharmaceuticals when productivity, consistency and costs are among the primary concerns.