When designing a recombinant protein production process, a high number of parallel cultivations must be carried out. That task is typically performed using batch cultures in shake flasks or microwell plates, in which fermentation conditions are not monitored. To overcome that limitation, we combined the SensorDish Reader and Shake Flask Reader systems (from PreSens) with an enzymatic glucose delivery system (EnBase technology from BioSilta Oy) for Escherichia coli cultivations. Our objective was to determine whether SensorDish reader cultures would yield reproducible process data that were directly comparable to those at shake flask scale (Photo 1). 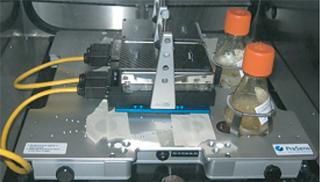 Especially in the biopharmaceutical industry, a consistent process development from microliter to industrial scale requires consideration of many different perspectives to completely understand a transition process. We created a design of experiments (DoE) to determine optimal parameters at two different cultivation scales. Such batch-type cultivation principles in orbitally shaken systems (mostly shake flasks, but also microwell plates and bench-scale fermentors) are used to obtain acceptable results with as little effort as possible. Unfortunately, they are mostly carried out without considering the important influence of conditions in large-scale production on product quality and process yield.

The main parameters overseen in screening and laboratory scale are the fed-batch operation — in which the dosing of carbon source and the pH are controlled — and concentration gradients, which can be a result of large volumes, insufficient stirring and/or mixing capacity, and operation cost reductions. Batch processes at laboratory scale have high initial carbon-source concentrations, so the pH may change over time. Furthermore, shake-flask cultivations present insignificant concentration gradients in the medium, thereby hindering study of bacterial growth under rapidly changing conditions (e.g., glucose pulses). Little information is generated with microwell plates, and the abovementioned difficulties are also present. In addition, sampling and high-precision analysis are limited because of the small volumes.

So it is important to understand the real limitation of each scale (microwell, flask, minireactor, large-scale reactor) and its relation to all other steps in product development. Reliable mathematical, analytic, monitoring, and control methods need to be created to transmit the information between different stages.

Here, we compare fed-batch cultivations at two scales: 24-well plates (total volume = 3.3 mL) and shake flasks (125 mL). We used PreSens fluorescent sensor technology to allow online monitoring of both dissolved oxygen and pH in the culture (Photo 1). By those means, a mathematical relation between micro- and milliliter scales can be developed. That approach should enable a better design of shake-flask experiments, based on previous information obtained in well plate scale.

To perform substrate-limited fed-batch cultivations in plates and flasks, we used the EnPresso growth system. It emulates glucose feed by releasing glucose from a polysaccharide by means of an enzymatic reaction. The feed of glucose in the culture can be controlled with the amount of added enzyme (named “EnZI’m,” provided within early BioSilta products).

We used 24-well OxoDishes (for oxygen) and HydroDishes (for pH) monitoring technologies with the SDR SensorDish Reader measuring system as well as shake flasks equipped with pH and dissolved oxygen (DO) fluorescent sensors and measured by the SFR Shake Flask Reader unit. The SensorDish Reader devices were combined with System Duetz sandwich covers and clamp systems (from EnzyScreen).

In addition to online measuring of pH and DO, we measured bacterial growth with a spectrophotometer at 600 nm (OD600). We carried out enzymatic feed using medium prepared from EnPresso tablets (BioSilta) according to the manufacturer′s description and inoculated with E. coli BL21 cells. Initial OD600 of the cultures was between 0.1 and 0.3. We monitored continuously pH and DO in microwell plates and in shake flasks during the whole cultivation to ensure constant conditions without oxygen limitation and a pH level between 5 and 7.5. Overnight cultures were removed from the respective readers at two-hour intervals to determine optical density OD600.

As Figure 1 shows, all DO curves present the characteristic trends of a substrate-limited, fed-batch culture. The enzyme concentration is constant throughout each experiment, which induces a quasiconstant feed of glucose during cultivation. 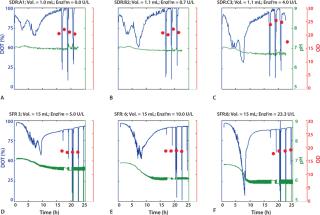 In the first phase, the low cell density results in a reduced total glucose uptake capacity, allowing for glucose accumulation and causing an initial phase of exponential growth. The rapid increase of the bacteria’s respiration capacity is indicated by an accelerated drop of the dissolved oxygen tension (DOT) curve. The decrease in pH values indicates secretion of acidic compounds, mainly acetic acid.

The second phase is characterized by substrate limitation. Excess glucose is consumed, and cells are obliged to decrease the growth rate and respiration to adapt to the new conditions.

Figure 1 shows that the inital decrease of DOT recorded in the SDR and SFR depends on the amount of glucose-releasing enzyme added to the culture. So an optimal amount of enzyme for rapid aerobic growth can be determined (Figure 1A–C). As expected, shake-flask cultures allow for better oxygen transfer so that enzyme concentrations can be increased up to 23.3 U/L without reaching oxygen limitation. The trends of the SDR experiments were reproducible in the shake flask system,
and we recorded a similar DOT and pH profile (Figure 1D–F). Furthermore, we demonstrated reproducibility. Variations between different wells and different cultures were statistically insignificant (data not shown).

DOT and pH are essential measurements for monitoring the state of cultures in bioproduction. The ability to monitor both DOT and pH in early development stages (such as in screening experiments in microwell plates and shake flasks) is a huge step toward faster bioprocess development. Combining those new measuring technologies with the adequate models for monitoring and scale up permits a more efficient information flow from small to medium scale. Screening efficiency is increased by enabling cellular growth under aerobic, substrate-limited, and pH-stabilizing conditions. Controlled fed-batch cultivations allow not only higher product formation, but also a higher similarity to large-scale production conditions.