Increasing demand for monoclonal antibodies (MAbs) — useful as immunodiagnostic reagents in basic research applications and potential immunotherapeutics — has created a need to optimize protein production techniques. Many developers have attempted to increase MAb output from cell culture by addressing both equipment and consumables. For example, recent advances in improved bioreactor designs and bioreactor operation have increased antibody outputs by increasing cell densities and extending cell life in culture. 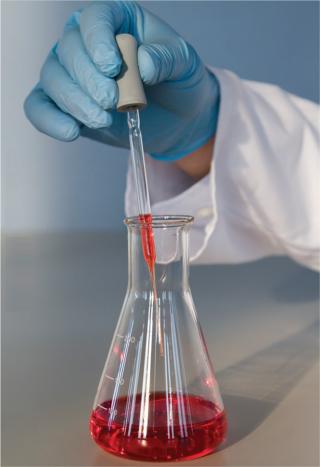 Bioreactors can operate in batch, perfusion, and continuous modes. The modified “fed-batch” process was developed based on feeding cultures with a growth-limiting nutrient substrate to improve their longevity and cell health. The fed-batch strategy is typically used in bioindustrial processes to achieve high cell densities in bioreactors and extend the production phase of cultures. This process has been implemented for many cell types including hybridomas and Chinese hamster ovary (CHO) cell cultures (1, 2).

Improving cell culture media has been and continues to be an area of productive research. Alternative strategies have been used to increase protein output, both before and after the bioprocess trend toward serum-free media. Early additions included mouse peritoneal factors, growth inhibitors, autocrine factors, and cyclic nucleotides. Another strategy is hyperstimulation by osmolarity stress. The first chemically defined media approaches showed varying degrees of success, but room for improvement remains (3,4,5). Serum-based formulation changes are increasingly unsuitable for production of human therapeutics, for which animal-free or protein-free, chemically defined cell culture media are preferred or required (6).

All commercial cell culture media were purchased from Sigma-Aldrich.

The QED SuperMedium formulation was prepared as described by Weng and Chua (11).

Over 20 years ago, Murakami et al. demonstrated that increasing the total amino-acid content of cell culture media in combination with increased glucose could increase cellular growth threefold in selected hybridoma cell lines (7). A dramatic extension of that phenomenon was described in 1994 by Chua et al., who demonstrated hyperstimulation of MAb production in an eRDF medium — enhanced RDF (named for its developer, the Research Institute for the Functional Peptides Company), with RPMI (also named for its developer, the Roswell Park Memorial Institute), Dulbecco’s modified Eagle’s medium (DMEM), and Ham’s F-12 nutrient mixture in a 2:1:1 ratio using high-osmolarity stress (8, 9). Although the precise mechanism was not fully understood, Oh et al. determined that the metabolic activity of hybridomas would be increased to compensate for the osmotically elevated external environment (10).

Further studies by Weng and Chua examined the effects of varying nutrient composition (11). They discovered that certain amino-acid compositions provided enhanced MAb output from a broad range of hybridoma cell lines when provided at substantially saturating concentrations in aqueous solutions and combined with the usual basal medium components: salts, carbohydrates, nucleic acids, vitamins, lipids, and other compounds necessary for cell viability. The resulting medium was patented in 2009 and has since been designated “QED SuperMedium.”

We prepared the QED SuperMedium formulation and compared it with standard basal cell culture media to evaluate its performance for enhancing the production of reagent MAbs. Factors examined included protein production and cell viability for a number of hybridoma and CHO cell lines. We observed production increases in the five- to >15-fold range over standard basal media. 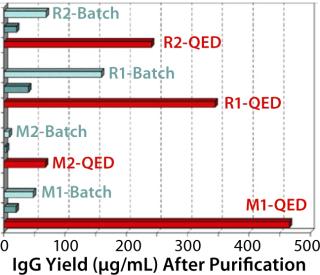 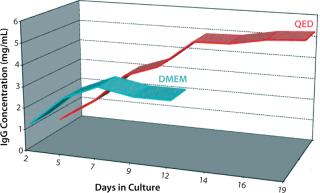 Figure 4 shows cell viability for four representative hybridoma cell lines over a one- to two-week period of continuous culture in either QED SuperMedium or DMEM. We observed significant increases in hybridoma cell viability with no need for periodic feeding when using the new medium. Finally, Figure 5 compares cell viability for a recombinant CHO cell line grown using either QED SuperMedium or Iscove’s Modified Dulbecco’s Medium (IMDM) in shaker flasks. Both media were supplemented with 10% fetal bovine serum. 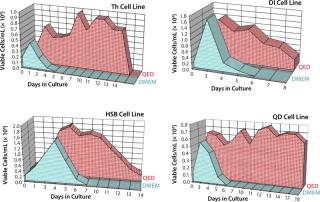 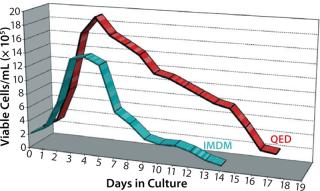 The new medium outperformed traditional mammalian cell culture media in various different cell culture systems, as Figures 1–3 demonstrate. Of particular benefit is that this medium can be used in batch mode, with no need for periodic feeding or supplementation during production. Spinner flasks or roller bottles thus can be seeded with hybridomas and left to produce MAbs for two or three weeks without needing their culture medium to be augmented. That minimizes labor as well as potential contamination risks.

Because the physiological environment provided by this new medium differs from conventional media in which the tested cell lines were first propagated, we found it to be beneficial for both cell growth and protein production to adapt those cell lines to it. That was easily accomplished by successively passaging and expanding cell lines in QED SuperMedium for about one week, after which cell viability was usually at least 90% and the cells were ready for large-scale protein reagent production.

It was interesting to note that cells grown in the new medium appeared to derive a significant portion of their energy requirement from sources other than glucose (Figure 6). Amino acids in the medium serve as a preferential energy source for cell metabolism, which reduces cells’ reliance on a source of carbohydrates. By extending cell longevity and circumventing the need for repeated feedings, in addition to improved protein expression, we were able to reduce costs substantially for MAb and CHO cell protein production (Figure 7). QED Bioscience has subsequently made this medium available as a basal and animal-protein–free medium under the QED SuperMedium trade name. 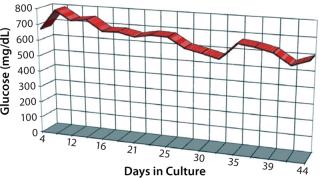 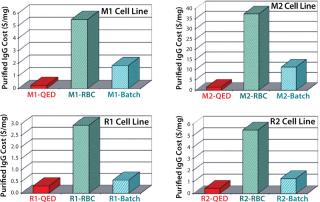 Increasing demand for monoclonal antibodies to be used in therapeutic, diagnostic, and research applications has encouraged companies to optimize their protein production techniques. Our test results indicate that MAb output can be increased by manipulating the concentration of certain cell culture medium components — amino acids, in particular. The unexpected extension of cell viability without refeeding also reduces potential opportunities for contamination and could significantly reduce labor costs in producing MAb reagents. This cell culture medium can be effective in essentially all modes of MAb production, so it could find a significant place in such production for the future. Further comparison studies are certainly warranted.