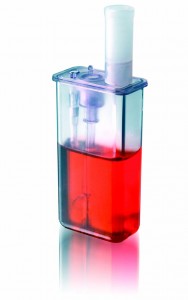 For many years a recognized critical bottleneck in development of products from mammalian cell lines was selection and isolation of stable, high-producing clonal cell lines. In recent years, however, clone-selection criteria have been expanded to include product quality and functionality. That is driven both by regulatory demands and an explosion of interest in production of biosimilars and biobetters.

To meet those requirements, companies apply high-throughput experimental approaches to cell line selection, which allow assessment of large numbers of clones for multiple factors in a single experiment. Such work traditionally has been performed using small shake-flask cultures. But shake flasks present a number of drawbacks (3, 4). From a technical perspective, they allow only limited control of pH or dissolved oxygen (DO), and their mixing environments are different from those of stirred-tank systems. From an operational perspective, shake-flask cultures are labor intensive with limited throughput. That in turn reduces the breadth of experimental studies performed using them. Additionally, they require a large number of manual operations, making their use prone to error (e.g., pipetting accuracy experimental errors and contaminations).

Those difficulties reduce the level of data interpretation and confidence in experimental outputs of shake-flask studies, resulting in either repeated or extended experiments. Thus, those experimental outputs may not represent stirred-tank production environments well in terms of productivity or product characteristics such as glycosylation patterns. So resulting data sets can be limited or incomplete. Cell-line ranking processes can involve multiple rounds of batch and fed-batch shake flasks to reduce initially large numbers of cell lines to a small-enough number for testing in multiple bench-top bioreactors. Finally, at┬Ā the end of such a process, risks remain that (because of those nonrepresentative experimental models) the chosen cell lines will perform suboptimally upon scale-up. And that in turn can compromise development programs and may even put whole programs at risk.

Therefore, advanced approaches are needed to improve the cell line decision-making process and reduce risks as well as costs and timelines within development programs. To address all those issues, we outline a novel, multiparametric approach that uses high-throughput, automated, microbioreactor technology to enable simultaneous clone selection and feed-strategy optimization. This can reduce timelines substantially for clone selection and process optimization.

Material and Methods
Microscale Bioreactor Assessment: The drive to conduct many simultaneous experiments under bench-top bioreactor conditions led contract manufacturer Cobra Biologics to review several automated bioreactor mimics. Those could offer the capability to explore culture design spaces using many reactors operated at the same time. The drawback of many microscale approaches is their inability to mimic the sparged, stirred action of a bioreactor. Also, they have limited or no control over dissolved oxygen (DO) and pH inside the microbioreactors. The <10-mL working volume of some microscale models can place significant limitations on the quantity of analytical testing made possible using them, especially when multiple samples are required during an experimental run.

With pH, DO, stirring, sparging, and sampling parameters in mind, the company selected the ambr15 advanced microscale bioreactor system from TAP Biosystems (now part of the Sartorius Stedim Biotech Group) as a clone- selection platform. Established for mimicking bench-top bioreactors (3), this technology comprises three components: a single-use reactor with 10ŌĆō15 mL working volume, an automated liquid- handling workstation, and controlling software. Key to its success as a mimic is that the bioreactor contents are stirred by an impeller (Figure 1), 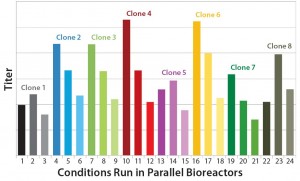 with gases supplied by sparging just as they would be in a larger-scale bioreactor. The workstation provides independent parallel control of 24 or 48 bioreactors and can control agitation speed, gas supply, and temperature while providing automated liquid-handling functions that enable bioreactor-specific media, feed, inocula, and sampling strategies. Each bioreactor incorporates sensors for real- time measurement and automated DO and pH control, settings for which can be bioreactor-specific. DO is regulated by oxygen sparging, and pH is regulated by CO2 and liquid-alkali addition.

Clone Stability: Although titer is an important guide to productivity, a cell line for use in large-scale (>250 L) production runs also must be stable over time. A dramatic decline in productivity can occur as some clones age, and such unstable clones are unsuitable for large- scale production. To determine which clone to take forward into scale-up and generation of a master cell bank, we chose eight clones for a clone stability study and evaluated them for expression and product quality in the microscale bioreactor. Cells from generations 0, 20, and 40 were cultured in parallel with the selected feed strategy using the microscale bioreactor system. We analyzed samples from the last days of culture for titer using protein A HPLC. And we took harvest samples from selected clones further ŌĆö into purification by protein A affinity and product characterization ŌĆö before selecting the best ones to scale up.

Scale-Up: For this multiparametric approach of clone selection and feed- strategy optimization to be a viable early process development model, results from microbioreactor-grown cultures must be comparable with those of a bench-top bioreactor. To determine data consistency, we scaled one clone (selected as having high titers and good stability) up to 5 L and 250 L using a proprietary, optimized, fed-batch strategy (A) for multiparametric clone┬Āselection and parallel fed-batch optimization. We sampled from each of the 250-L HyClone SUB (Thermo Fisher Scientific) and 5-L Sartorius glass bioreactors as well as the microbioreactor every 24 hours and analyzed those samples

Results
Process Yield: The titer profiles of clones 1ŌĆō8 cultured in the microscale bioreactor showed that all clones demonstrated significant titer changes according to the different feed strategies applied (Figure 2). 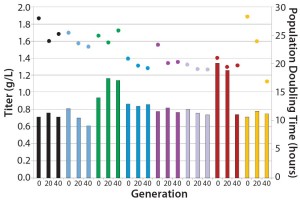 Clones 4 and 6 had the highest titers using feed strategy A, more than doubled what they achieved with feed strategy C. These titer results allowed each clone to be ranked quickly according to how its productivity was affected by different feed strategies (Table 1).

Stability: Parallel expression evaluation of the eight clones in early, middle, and late generations showed a range of stability and expression levels (Figure 3). We selected three clones to advance further and scale up based on clone stability, expression levels, and bioreactor performance. Designated clones A, B, and C, they were all taken further to 5-L bioreactor evaluation and process run-through. Replicate growth and titer profiles of the best clone cultured in the stirred microbioreactors and the 5-L and 250-L bioreactor showed good comparability (Figure 4), with peak viable-cell densities of 12ŌĆō14 ├Ś 106 cells/mL and a maximum titer of 1.6 g/L. This indicated that early process development can be performed in automated microscale bioreactors with a high level of confidence in the accuracy and scalability of the results. 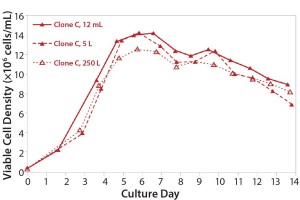 Figure 3: Growth and titer profile of Clone C, a CHO-S cell line cultured in the stirred microscale bioreactor system and in 5-L and 250-L bioreactors 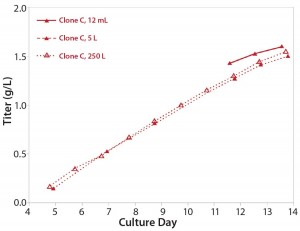 Figure 4: Titer profile of Clone C, a CHO-S cell line cultured in the stirred microscale bioreactor system and in 5-L and 250-L bioreactors

Discussion
We have outlined a novel, multiparametric approach using automated, stirred microbioreactor technology for clone-selection and feed- strategy optimization. Stable clones can be selected rapidly using this multiparametric approach: not only allowing for their selection, but also significantly shortening time lines for this critical task. On average, this platform allows feed-strategy evaluation and clone selection from a bank of up to eight clones in four weeks (from cell-vial thawing to harvest from 24 microscale bioreactors).

To perform the same multiparametric experiments using bench-top bioreactors would require several sets of bioreactor runs adding up to 24 bioreactors, so the time required would be several weeks more than for running one set of 24 microscale bioreactors. That results from the time required for media preparation and cleaning and sterilization of flasks and bioreactors, which necessitates significant investment of time and resources. Additionally, because all bioreactors cannot run in parallel, the risk for introducing variability does increase.

This multiparametric approach ŌĆö which allows for simultaneous clone selection and feed-strategy optimization with a stirred, automated, microscale bioreactor ŌĆö can be used to replace conventional shake-flask and bench-top bioreactor models, saving considerable time and money in set-up, operation, shut down, cleaning, and sterilization. Because this strategy uses fully automated microbioreactors with smaller cell-culture volumes, scientists can perform many more experiments using a smaller quantity of resources such as media and feed. That makes this a cost- effective and high-throughput method for selecting higher-expressing cell lines and optimizing culture processes in parallel. Consequently, bioprocess optimization is no longer limited by availability of bench-top bioreactors, operator time, or facility infrastructure. Using this multiparametric platform approach could significantly contribute to reducing development timelines and costs in early stage process development of protein-based therapies.