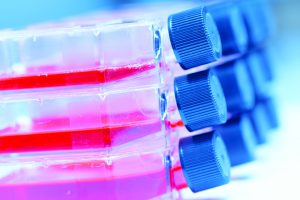 Monoclonal antibodies (MAbs) have radically transformed the treatment of many chronic diseases, mainly in the fields of oncology and autoimmunity. The overwhelming majority of therapeutic MAbs are manufactured from recombinant Chinese hamster ovary (CHO) cell lines. The original CHO cell line was isolated in the 1950s, and since the early 1980s, it has become the workhorse of the biopharmaceutical industry.

The CHO-DG44 strain was generated after several rounds of mutagenesis that deleted both copies of dihydrofolate reductase (dhfr) genes by ionizing radiation (1, 2). The DHFR enzyme catalyzes reduction of dihydrofolic acid to tetrahydrofolic acid, making it central to the biosynthesis of purines, thymidylic acid, and certain amino acids (3, 4). For that reason, CHO dhfrŌĆō/ŌĆō strains require supplementation of hypoxanthine and thymidine (HT) in their cell culture media. Several MAbs currently are produced by recombinant CHO-DG44 cell lines to allow for consecutive rounds of genomic amplification of a gene of interest mediated by methotrexate (MTX) (5, 6).

Upstream process development depends strictly on the availability of chemically defined (CD) media and feeds that can encourage high cell densities and MAb expression titers (currently averaging several grams per liter of culture). This is particularly important for production of biosimilars, for which the pressure to reduce cost of goods (CoG) is demanding. Development of specific CD media is a time- and resource-consuming activity that generally involves statistical design of experiments (DoE) (7). Nevertheless, use of media without components of animal origin is recommended highly by all regulatory agencies as a means to allay safety concerns regarding the possibility of infective-agent transmission. Agents of concern include bovine/porcine viruses, mycoplasma, and transmissible spongiform encephalopathies (TSEs). Biotechnology companies typically follow one of two approaches to develop their media platforms:

The choice between those approaches depends on a number of factors, with time and resource availability playing pivotal roles. Choosing the second option in the context of a media panel assessment project, we developed a streamlined protocol to adapt a CHO-DG44 cell line from adherent, serum-supplemented culture to suspension culture in a fully chemically defined medium (Advanced Bioprocessing medium #27 from Thermo Fisher Scientific) over just five weeks. That reduced our early process development timeline significantly. And we believe that this protocol is suitable particularly for biotechnology companies wishing to develop their own CHO-DG44 expression platforms.

Cells were thawed in a water bath at 37 ┬░C and centrifuged at 1,100 rpm for five minutes at room temperature. After discarding the supernatant, we resuspended the pellet in prewarmed medium in a 175-cm2 T-flask (TF) from Corning Life Science. Every three to four days, we removed spent medium, washed the cells with sterile phosphate-buffered saline (Thermo Fisher Scientific), detached them by a short incubation with recombinant trypsin (Life Select Tryple Select from Thermo Fisher Scientific) at 37 ┬░C, and reseeded them at 0.1ŌĆō0.3 ├Ś 106/mL in 40┬ĀmL of fresh medium.

Only after the cells were adapted completely to the new media were they seeded in shake flasks and grown in the agitated incubator, subculturing every three to four days. Once completely adapted to the new medium in suspension-agitated cultures, small cell banks were frozen in 45% spent medium, 45% fresh medium, and 10% dimethyl sulfoxide (Sigma-Aldrich). Briefly, we centrifuged cell suspensions at 1,100 rpm for five minutes at room temperature, then discarded the supernatant and resuspended the pellet in cold freezing medium at a concentration of 107 viable cells/mL in 2-mL cryovials (Corning). The cryovials were frozen in a Mr. Frosty (Thermo Fisher) container at ŌĆō80 ┬░C for two days, then transferred to a Dewar liquid nitrogen freezer.

Results
Stepwise Serum Reduction Followed by New Media Adaptation (Standard Protocol): Standard protocols for adapting CHO cells from adherent, serum-containing cultures to suspension growth in serum-free media usually follow a stepwise serum reduction with gradual introduction of the CD medium. Generally, toward the end of such a protocol, some cells begin to grow in suspension and can be transferred to shake flasks.

Obtaining robust cell growth in agitated systems usually is the main goal of upstream process development because MAb manufacture normally requires stirred-tank or wave-mixed bioreactors, so the cells must be ŌĆ£educatedŌĆØ to grow in suspension. 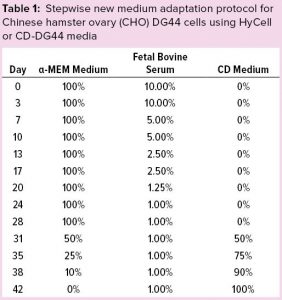 Initially, we adopted a standard protocol to induce our CHO-DG44 cell line to grow in suspension: Cells were revived and subcultured in static T flasks with complete ╬▒-MEM medium, as described above. Table 1 shows the percentages of ╬▒-MEM medium, FBS, and the new medium that we adopted during these adaptation steps. After two consecutive passages using 10% FBS-containing medium, we halved the FBS percentage approximately at each passage from 10% to 1%. That serum-reduction step lasted 28 days. 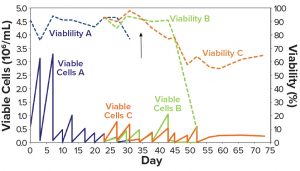 Figure 1 shows that Condition A (blue line) experienced a rapid drop in viability and was discarded. This demonstrates that ╬▒-MEM + 1% FBS is insufficient to maintain a constant cell growth. Conditions B and C showed sufficient adaptation until about day 35 (Figure 1, black arrow), when the cells started to show suspension growth. Then we transferred those cells into two 125-mL shake flasks (30-mL working volume) and incubated them in the shaker incubator, then repeatedly subcultured them. At day 45, when the new media had substituted the ╬▒-MEM medium, both Conditions B and C showed rapid decline in viability (Figure 1 dashed lines). They never recovered fully.

We speculated that these failures probably resulted from switching to suspension growth too early or from suboptimal adaptation to the two CD media. Moreover, the whole process took a long time: over two months from thawing to the end of adaptation. We emphasize here that the serum was not completely eliminated with this protocol; it was kept constant at 1% throughout the adaptation steps.

Contemporary Serum Reduction and New-Media Adaptation (New Protocol): To resolve those issues with an intent to reduce the adaptation time significantly to serum-free, suspension-growing cell cultures, we modified our adaptation protocol. In the new protocol, we used low-serum adaptation that gradually introduced the CD media. Using this combined approach, we sought to adapt our cell line to both CD medium and serum-free conditions simultaneously. We also included a new CD medium (medium #27) in this evaluation trial, having selected it from the 20 CD media in a panel from Thermo Fisher Scientific Advanced Bioprocessing after initial screening (data not shown). 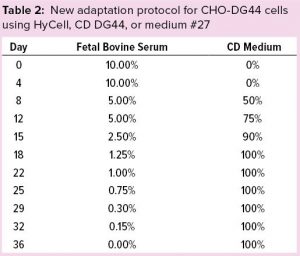 We thawed a new vial of CHO CD44 cells into 40┬ĀmL of ╬▒-MEM containing 10% FBS in a 175-cm2 TF. After two passages (eight days), we reduced FBS to 5%. Then we gradually adapted the cells to the CD media (Hycell, CD DG44, and medium #27) ŌĆö and to low-serum conditions according to the protocol described in Table 2. Figure 2 shows that after two weeks (on day 22), when FBS was still 1.0% and the media had been substituted completely, cells growing in medium #27 (medium D, orange line), reached ~8.0 ├Ś 106 cells/mL. Media A, B, and C sustained no substantial cell growth. Thus, we eliminated those media at day 29 for poor growth and low viability. 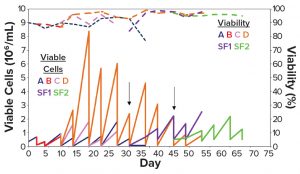 From days 25 and 36 (Figure 2, black arrows), we shifted two aliquots of cells grown in medium D either with 0.75% serum or serum-free) to suspension growth in two 125-mL Erlenmeyer flasks (Figure 2, SF1 violet line and SF2, green line). Figure 2 shows that the suspension-adapted cells cultivated in serum-free medium D were highly viable, both in static and agitated cultures, after repeated passages. These data demonstrate that, in slightly over a month, we were able to adapt CHO-DG44 cells from a 10% serum-containing medium to a serum-free CD medium with a seamless protocol of simultaneous serum reduction and medium adaptation. The same cells did not adapt to other media under the same experimental conditions.

Figure 3 recapitulates this streamlined, combined protocol of serum reduction and contemporary adaptation to CD medium. To demonstrate that adaptation was consistent, we created a small cell bank (10 vials) of the adapted cells as described above. Figure 4 shows that those cells displayed consistent growth and viability, once they were thawed, for more than 10 consecutive subculturing passages in shake flasks using the CD medium. This demonstrates that the adaptation protocol was efficient, and the frozen cells could be used as parental cells to generate recombinant products. 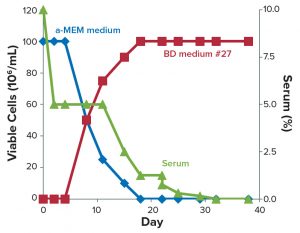 CHO cells are the standard expression system for production of MAbs and other recombinant proteins for therapeutic use. Several commercial sources offer good manufacturing practice (GMP)-banked CHO cells and related expression plasmids, often coupled with optimized CD media that allow users to obtain stable clones with high productivity. Moreover, much effort is devoted to understanding the nutrient requirements of CHO clones and then optimizing media formulation and feeding strategies accordingly (8).

Although such expression kits can facilitate selection of high productivity clones greatly, the associated licensing fees can be expensive. Sometimes adoption of such ready-to-use solutions includes payment of royalties at defined steps in the clinical development of molecules derived from them and even during the commercial stage of resulting biopharmaceuticals. Those costs can be especially burdensom for small biotechnology companies, so the need remains for less expensive ways to establish stable CHO cell lines. 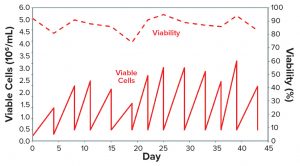 Reasonably priced CHO cells from commercial distributors normally come in basal media containing FBS. To limit the use of animal-origin components, regulators generally recommend that biopharmaceutical developers switch to CD media during the earliest phases of cell line development. Adopting a CD medium during early process development ŌĆö ideally before DNA transfection and clonal selection ŌĆö enables a company to save substantial time and resources. But standard protocols for adapting CHO cells to serum-free conditions are tedious and time-consuming, with no guarantee of positive results. Standard protocols for adapting cells to serum-free CD media can take over three months to produce fully adapted, suspension-growing cells. The usual critical point is the step from the presence of serum at a low percentage to completely serum-free conditions, when the absence of growth signals from serum-soluble factors often arrests growth.

We adopted the Thermo Fisher Scientific Advanced Bioprocessing Media Assessment Panel (MAP) program, which includes evaluation of 20 proprietary CD media and six feeds, then selected one CD medium that enabled adaptation of an adherent-growing CHO-DG44 cell line from basal medium containing 10% serum to suspension growth in about a month. Using this CD medium, we remarkably reduced the length of the serum-free adaptation process over three different commercial media. We propose a seamless serum-reduction and new-mediumŌĆōadaptation protocol that saves significant time relative to standard approaches.

With our protocol, which combines reduction of serum and gradual adaptation from basal media to a CD medium, we obtained fully adapted, suspension-growing cells in a streamlined workflow starting from adherent cultures. We speculate that the contemporary reduction of serum and gradual increase of CD medium enables cells to adapt to the deprivation of growth signals from the serum. But that was possible only with medium #27, not with other CD media we tested. This suggests that the medium formulation fits particularly well with our CHO-DG44 cloneŌĆÖs nutrient requirements. It would be worth testing with other CHO-DG44 clones and different strains (e.g., CHO K1).

The medium also displayed flexibility in replacing other established CD media/feed platforms without the need to preadapt cells (data not shown). In fact, when we used it to inoculate cells directly in our Sartorius Stedim Biostat Univessel 2L production-phase bioreactor, we observed significant increase of cell density and MAb titers regardless of the medium used during the seed-train expansion (data not shown). This suggests that medium #27 could be used as a production medium as well, at least with our CHO clone, although its effects on product quality attributes should be evaluated carefully. Such flexible use of this medium in production could contribute to further reducing the length of our process development.

We have concluded that

This is particularly relevant in the early phases of recombinant product development, when it is paramount to find a good media/feed platform to advance quickly in process development. To be more specific, our streamlined protocol is applicable to generation of proprietary CHO-DG44 starting from inexpensive commercial sources of such cells.