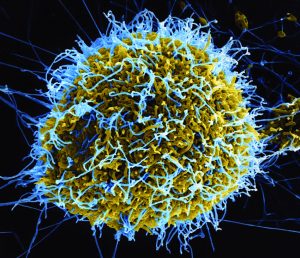 Fang Tian is a lead scientist and head of cell biology research and development at the American Type Culture Collection (ATCC) in Manassas, VA. She is a member of both the International Cell Line Authentication Committee (ICLAC) and the US technical advisory group for the ISO/TC276 technical committee. At ATCC, she oversees preparation, authentication, characterization, quality control, and cryopreservation of more than 3,400 accessioned animal cell lines and hybridomas in the cell biology general collection. She holds a PhD in pharmacology from the Chinese Academy of Science and served a four-year postdoctoral fellowship at the University of Pittsburgh. There, she worked on an anti-cancer cytokine and established a culture method for endothelial progenitor cell differentiation from mouse bone-marrowâ€“derived hematopoietic stem cells. Later, in a two-year research fellowship at Harvard Medical Schoolâ€™s Massachusetts General Hospital, she studied stress-mediated cell death in cancer cells.

This spring, we chatted virtually about industry efforts to increase production levels of cell-based expression systems.

Our Conversation
Over the past 20 years, the biopharmaceutical industry has reported great advancements in antibody expression titers from stably transfected Chinese hamster ovary (CHO) cell lines. But what about other proteins and host cells? How do they compare? Antibodies, especially monoclonal antibodies (MAbs), represent the largest group of therapeutic proteins in the biopharmaceutical market. Other biotherapeutics include peptides and recombinant proteins such as hormones, growth factors, enzymes, coagulation factors, and so on. Such proteins can be produced by nonmammalian expression systems (e.g., bacterial, yeast, plant, and insect cells) and by mammalian cells.

The biggest advantage of using mammalian expression systems in biomanufacturing is their ability to produce large, complex proteins with posttranslational modifications (PTMs) similar to those made by human cells. Although CHO cells and their derivatives are used most commonly for therapeutic-protein expression, several other mammalian cell lines have been approved for complex-protein production: e.g., baby hamster kidney (BHK21) cells, murine myeloma cell lines (NS0 and Sp2/0), human embryonic kidney (HEK293) cells, and other human cell lines (HT-1080, PER.C6, CAP, and HuH-7). Interest in the latter has grown recently because although CHO and other nonhuman mammalian cell lines can produce PTMs that are consistent with human endogenous proteins, they also produce nonhuman PTMs that can be immunogenic. Human cell lines do not have that issue. Human cell lines are relatively new expression systems for producing protein therapeutics, so they still could be improved/optimized for routine bioproduction of a wide range of biotherapeutic proteins.

Once double-stranded breaks in host DNA are made, scientists can introduce desired genetic modifications through nonhomologous end joining or homology-directed cellular repair mechanisms. Desirable host-cell phenotypes can be created by knocking in, knocking out, or mutating critical genes that regulate cell growth, cell death, metabolism, and protein synthesis and folding. Such genetic modifications are made permanently to host-cell genomes without introducing exogenous sequences. That is an ideal way to improve cell health and to control cellular chaperones and ribozymes effectively for proper PTM of antibodies and other glycoproteins. Those benefits apply to viral production as well.

Is it difficult to maintain product quality when optimizing cell lines for expression titer? What kinds of problems can arise, and how do companies solve them? It is challenging. A number of cell culture parameters can influence product quality and potency significantly: e.g., temperature, pH, osmolality, gas-flow rates and means, stirred-tank impeller speeds, and metabolite levels. In addition, biological factors can contribute to substantial variability during bioprocessing: cell concentration and viability, mitochondrial activity, and levels of lactate dehydrogenase (LDH) and of nicotinamide adenine dinucleotide with hydrogen (NADH). All those potentially affect protein glycosylation, PTMs, and impurity profiles.

In addition to engineering host cell lines for desired characteristics, optimization of culture parameters is critical to obtaining high expression titers while meeting quality specifications. Furthermore, process scale-up is essential for obtaining large quantities of products, and scale-up is affected greatly by cell-culture parameters and biological factors. Efforts have been made to control the entire upstream process tightly â€” from starting with a frozen vial of producer clones to finishing with a culture broth harvest (3). However, we need better understanding of the sources of variation in cell culture and greater knowledge on the diversity of factors that affect cell growth and productivity.

Transient transfection works at laboratory scale for producing small quantities of material for testing purposes, but itâ€™s not used for clinical or commercial manufacturing. Is that related to expression titer? And is anyone working to improve titers in transiently transfected HEK293 or even CHO cells? Stable producer cell lines are more suitable for large-scale manufacturing than transiently transfected cells. Itâ€™s not really about expression titer. Stable producer cell lines have many advantages in regard to reproducibility and scalability. However, there is a need for transient transfection as well. It allows fast and parallelized production without the need to generate producer cell lines, which can be expensive and time consuming.

Transient transfection is suitable for small-scale (e.g., flask-based) production of antibodies for screening, but it also can be scaled up into batch or fed-batch bioreactor processes. Some researchers are attempting to improve titer in transiently transfected HEK293 cells. Optimization of transfection process and mammalian expression vectors for protein production have been reported to deliver volumetric yields of >0.5 g/L for recombinant antibodies (4).

Improving titers in transiently transfected HEK293 cells is of great interest in the gene-therapy field as well. Viral vectors have been used as a flexible and effective delivery system for gene therapies. But because of a demand for large quantities of viral vectors in clinical trials, thereâ€™s an urgent need to improve titers produced in transiently transfected host cells. Transient transfection is a commonly used protocol that generates high-quality vectors. However, scale-up is a major challenge. Although great strides have been made both in raising titers and scaling up processes for viral vector production (5, 6), more efforts are needed for a major breakthrough.

Many virus producers use insect cells and the baculovirus expression-vector system (BEVS). What kinds of titers do you see with that method now, and what kind of work is going on to improve those? There are two leading systems for large-scale production of adenoassociated virus (AAV) vectors: the HEK293 human cell line and Spodoptera frugiperda (Sf9) insect cells with the BEVS. Both systems have successfully demonstrated their scalability and ability to produce large batches of commercial therapeutic products. Production yields from the Sf9â€“baculovirus platform are several-fold higher per cell than from transient transfected HEK293 cells. However, a significant up-front investment is needed to clone and bank two recombinant baculoviruses with the insect-cell system. Consistent infection and quality control are more difficult to achieve with the Sf9â€“baculovirus platform. Another area of focus for improving that system will be reducing production of empty capsids that do not contain the genes of interest.

Insect cells infected with the baculovirus viral vector also can efficiently express recombinant proteins. One common issue that arises is that N-glycan precursors produced by insect cells are trimmed, so they do not develop into terminal galactose and/or sialic acid residues. In addition, possible side effects may come from baculoviruses inducing an innate immune response in mammalian cells (in product recipients). Insect-cell engineering could be an effective approach to solving those issues. Some advances have been made in developing transgenic insect cells featuring humanized protein glycosylation mechanisms (7, 8). Additional work could be needed to focus on altering cellular gene expressions and/or cell-signaling pathways.

For example, optimizing cell culture media and parameters for expressing therapeutic proteins a high levels may not be the same parameters for improving production scale-up. To provide cells with a proper physiological environment in a scaled-up process, both the bioreactor configuration and chemical requirements of those cells have to be satisfied. Many different culture parameters and biological factors are interconnected and sometimes even compete with one another. In addition, the quality of expressed proteins does not correlate directly to high titer.

Besides the focus on the increased production of protein therapeutics, developers should also emphasize the need to improve the quality of their recombinant protein products (e.g., stability and accurate glycosylation). In viral production, infection capability of the end product is as important as the titer â€” if not more so.

What kinds of differences can equipment make when it comes to expression titers? Final productivity and large-scale production of biopharmaceuticals are influenced strongly by hardware such as bioreactors, perfusion technologies, and control systems. The industry uses batch, fed-batch, and continuous/perfusion cultivation modes to produce recombinant protein-based biopharmaceuticals. The easiest of those to operate is probably batch mode, for which all essential nutrients are provided in an initial culture medium. Fed-batch is used more commonly because it allows for longer culture durations and thus increased final productivities over those available from batch mode. Perfusion enables simultaneous waste removal and nutrient supply.

Perfusion is becoming the preferred choice for production of therapeutic antibodies using mammalian cells. Residence time of antibodies in a bioreactor is decreased by this system.

Bioreactor types and process controls are also important factors to consider in building and optimizing a bioprocess for therapeutic production. Recent advances have been made in high-throughput devices and single-use cultivation systems. All those new hardware developments in biomanufacturing eventually will lower the cost of production, enhance flexibility, and increase the quantity and quality of biopharmaceuticals as the end products.