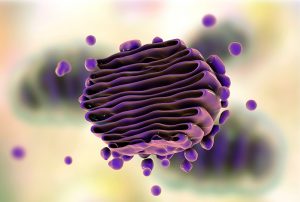 The Chinese hamster ovary (CHO) cell line was first established by Theodore Puck in the 1950s and was used mainly for cytogenetics studies (1). Since the 1990s, CHO cells have increased in popularity as expression host cells because they can be adapted easily into suspension culture and genetically modified. The CHO cell line also has a human-like glycosylation profile (2â€“4).

Therapeutic proteins undergo different posttranslational modifications (PTMs) during manufacturing. Some modifications can lead to undesired effects such as decreased stability, loss of efficacy, and increased immunogenicity (5â€“7). Thus, controlling PTMs is a key task in process development to ensure that manufactured biologics have high and consistent quality.

Many chemical modifications such as oxidation, deamidation, glycation, and isomerization can be introduced during multiple manufacturing steps (8). However, other modifications are catalyzed by cellular enzymes expressed by production host cells. The most prominent example is glycosylation (Figure 1) (8). The structure or consensus motif of therapeutic proteins typically governs how they are modified enzymatically, but host gene expression and cell culture conditions also influence the extent of modifications significantly. Below, we focus on such enzyme-mediated PTMs identified in CHO culture and on corresponding control strategies. 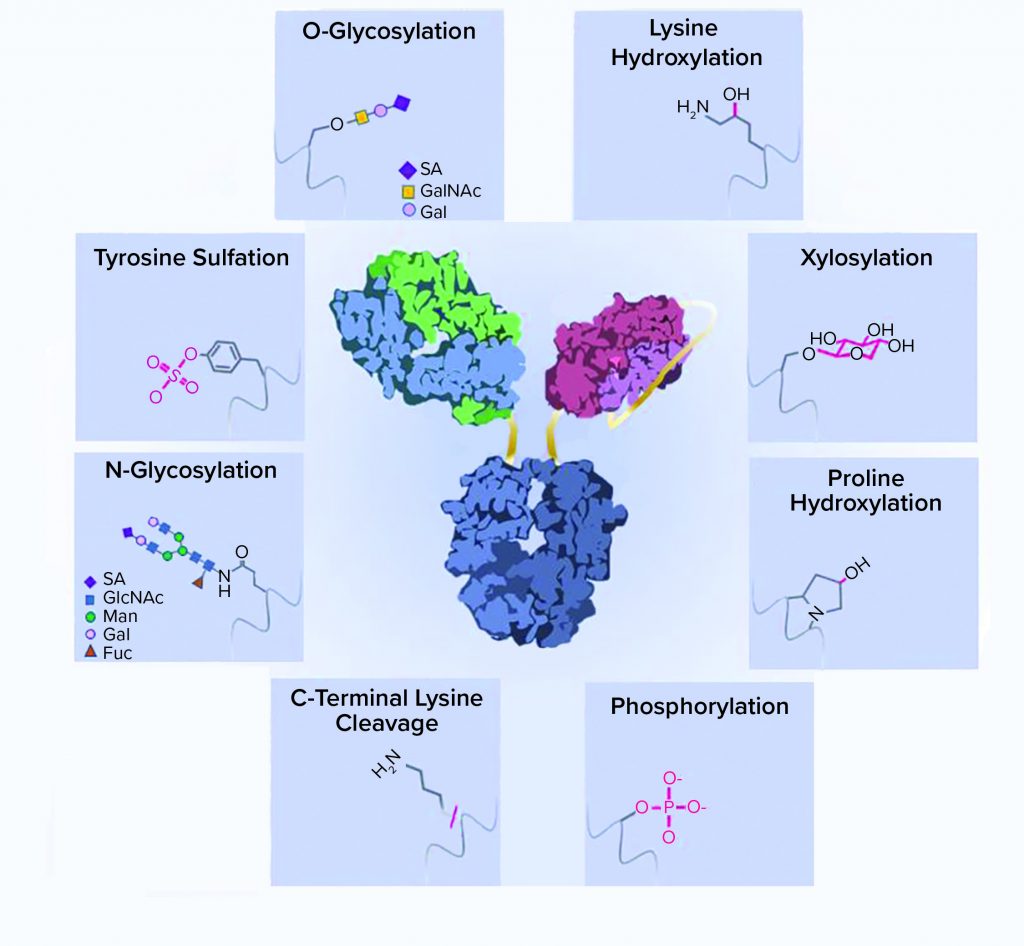 N-Glycosylation
Asparagine-linked glycosylation is a common PTM of recombinant proteins expressed by mammalian cells. The consensus sequence for N-glycosylation is Asn-Xaa-Ser/Thr (where Xaa is any amino acid except Pro), and the rarer sequence is Asn-Xaa-Cys (9, 10). N-linked oligosaccharides have a complex and versatile structure. They contain a common core with two N-acetylglucosamine (GlcNAc) and three mannose (Man) moieties. High-mannose glycans have more mannose moieties added to both branches of their cores. By contrast, complex glycans have GlcNAc added to both branches instead of mannose. Galactose (Gal) and terminal sialic acid (SA) can be further added to extend the oligosaccharide chain (Figure 1).

Among all rodent cell lines, CHO cells produce the most human-like glycans, with minimal levels of immunogenic epitopes such as galactose-Î±1,3-galactose (alpha-Gal) or N-glycolylneuraminic acid (Neu5Gc). Although glycan structures of CHO cells donâ€™t have terminally linked Î±-2,6-sialic acids and bisecting GlcNAc, such glycans have relatively low abundance in human serum IgG. Thus, the effect of their absence on product quality and bioactivity is considered to be negligible (11, 12).

The control of N-glycosylation through CHO cell engineering has been studied extensively over the past few decades. For example, Yang et al. determined the function of 19 glycosyltransferases by knocking them out individually or in combination and further engineered CHO cell lines to produce proteins with homogenous N-glycans (17). The fucosylation of antibodies produced in CHO cells can be modulated by different cell engineering. Deletion of the Fut8 gene, which encodes only the fucosyltransferase responsible for fucosylation in CHO cells, has produced fully afucosylated antibodies with significantly increased ADCC activity (18, 19). Similar results were achieved by deleting Slc35c1, which encodes a GDP-fucose transporter (20).

Alternatively, antibodies without core fucose can be produced by CHO cells overexpressing the N-acetylglucos-aminyltransferase-III enzyme to catalyze the formation of bisected glycans, which cannot be fucosylated (21). Another creative way to generate afucosylated antibodies is to overexpress a prokaryotic enzyme GDP-6-deoxy-d-lyxo-4-hexulose reductase, which deflects the fucose de novo synthesis pathway, thus depleting endogenous fucose substrate (22).

Sialylation level also can be modulated by CHO cell engineering. For example, overexpression of enzymes involved in sialylation (including human Î²-galactoside Î±(2,6) sialyltransferase I, UDP-GlcNAc 2-epimerase/ManNAc kinase, and N-acetylglucosaminyltransferases I and IV) leads to significantly increased sialylation (23, 24).

Sialylation also can be improved by manipulating the expression of sialidases that catalyze the removal of sialic acids from a glycan structure. Sialidases are released into cell culture fluid upon cell membrane damage (25). The deletion of three sialidase genes (Neu1, 2, and 3) maintained the sialic acid content and the proportion of tetra-sialylated recombinant human erythropoietin (rhEPO) throughout fed-batch cultures without compromising cell growth and rhEPO production. Further knockout of apoptotic genes Bax and Bak improved productivity and increased dramatically the percentage of tetrasialylated recombinant protein. That increase probably was the result of less sialidase being released into the culture medium when cell viability improved (26).

N-glycosylation of recombinant proteins also can be modulated during production processes. For example, fucose analogs and their derivatives have high efficacy in inhibiting fucosylation (27, 28). The levels of galactosylation precursors galactose and uridine and galacosyltransferase cofactor manganese can be adjusted to modulate galactosylation (29, 30).

Sialylation can be improved by adding dexamethasone, which stimulates galactosyltransferase and sialytransferase expression (31). Sialylation also can be improved by controlling the feeding strategy of two nucleotide precursor sugars: glucosamine (GlcN) and N-acetylmannosamine (ManNAc) (32). In addition, 2,3-dehydro-2-deoxy-N-acetylneuraminic acid, a sialidase inhibitor, can reduce sialic acid removal, thereby increasing sialylation (33). Culture conditions such as temperature, pH, and osmolality also can influence the level of glycans such as high mannose (34).

O-Glycosylation
O-linked glycosylation is a common PTM found on recombinant proteins expressed by mammalian cells. The most common form of O-glycan is the mucin type, which contains an Î±-glycosidic linkage between N-acetylgalactosamine (GalNAc) (and sometimes GlcNAc) and the hydroxyl group of serine or threonine (35). No clear consensus sequence has been identified for O-glycosylation, so predicting O-glycosylation is difficult. Other moieties can be added onto GalNAc or GlcNAc to extend the O-glycan structures further. Those include GalNAc, galactose, GlcNAc, fucose, sialic acids, and the sulfo group (36). As a result, O-linked glycan structures could be more diverse than N-glycans.
Typically, O-linked glycosylation is observed on recombinant proteins, but it is rarely found on monoclonal antibodies. Valliere-Douglass et al. have reported on O-fucose modification with a net addition of 146Â Da in the complementarity determining region-1 (CDR-1) of one antibody light chain. In that study, the amino acid sequence around the modified Ser did not conform to known O-fucosylation sequence motifs (37).

Peptide linkers, which are used regularly to connect multiple protein domains, are key structural elements of multispecific antibodies and fusion proteins. Flexible linkers can minimize the steric interference between domains, but their high solvent accessibility increases susceptibility to cleavage and modification. Some studies have discovered the O-glycosylation (xylose modification) of linkers with glycine/serine (GS) repeats, which are the most commonly used peptide linkers (38, 39). Complex glycan structures also can form following initial placement of xylose on Ser (40), thus increasing the difficulty of controlling them during processing.

Tyrosine Sulfation and Other Modifications
Tyrosine sulfation is a PTM commonly found on secretory and plasma membrane proteins (42). Tyrosine sulfation facilitates proteinâ€“protein interactions. For example, sulfation of P-selectin glycoprotein ligand-1 (PSGL-1) enhances binding to the receptor P-selectin (43, 44). Two studies have focused on tyrosine sulfation on recombinant antibodies expressed in CHO cells (45, 46). In both cases, the modification occurred in the variable regions of antibody light chain. Because of potential potency and immunogenicity concerns, tyrosine sulfation must be controlled during drug substance manufacturing.

Our group found that differential expression of genes in the sulfation pathway led to significantly different tyrosine sulfation levels in different CHO hosts. Such genes include tyrosylprotein sulfotransferase 2 (TPST2) and the sulfation substrate transporter SLC35B2 (47). Thus, sulfation can be mitigated by host-cell selection using TPST2 and SLC35B2 as biomarkers or the modulation of the expression of both genes.

Our group also identified sodium chlorate as an effective sulfation inhibitor (>50% sulfation reduction). This inhibitor had no significant effect on CHO culture performance and other product quality attributes (47).

Other PTMs catalyzed by cellular enzymes in CHO cells include hydroxylysine, hydroxyproline, phosphorylation, and C-terminal lysine cleavage. Posttranslational hydroxylation of lysine typically is found on mammalian proteins such as collagen with a consensus sequence (XKG), catalyzed by lysyl hydroxylase complex. Xie et al. reported on the hydroxylation of a lysine on the heavy chain variable domain of a recombinant antibody (48). In that study, the consensus sequence alone was not sufficient for predicting whether the lysine would be modified because other lysines with XKG motif in the same antibody were not modified.

Peptide linkers are susceptible to more modifications than the xylosylation described above. For example, Spahr et al. found hydroxyproline on glycine-proline linker (49), and Tyshchuk et al. observed phosphorylation of serine on a short GS linker (50). Such relatively rare modifications pose challenges to process control, yet their biological and biophysical consequences still are unknown.

Other PTMs such as oxidation, deamidation, and glycation can occur not only in cell culture, but also during other steps of a manufacturing process and drug product storage and handling (8, 53). The discussion of the control strategy of these modifications is beyond the scope of our review.

Mitigating Impacts of PTMs
PTM control during biopharmaceutical manufacturing often is challenging and resource-demanding. Thus, identifying problematic PTMs can be beneficial during the developability assessment stage and before process development (54). Selecting a final protein sequence with the most desired PTM profile can mitigate development risks significantly. Currently, the general practice is to produce protein materials of candidate sequences using a high-throughput transient expression and purification process followed by developability assessment using a panel of standard analytical methods, sometimes including stress conditions (55). That approach can assess a large number of sequences rapidly. However, the cell line and production process for developability assessment usually are vastly different from the ones that would be used for manufacturing.

It is well known that different host cells produce molecules with different levels of PTMs because of their intrinsic difference in genetic makeup. Some cryptic modifications with no consensus sequence can show up in one host but not another. Process conditions such as medium components and pH also can alter cellular enzymatic reactions and influence PTM profiles. Thus, product quality can differ greatly between materials used for developability assessment and those used in clinical studies. So using a scale-down manufacturing process to produce materials for candidate molecules is important. Once a problematic PTM (e.g., a cryptic glycosylation in the CDR) is identified, it can be eliminated through protein engineering. If the issue cannot be mitigated by protein engineering, a control strategy can be developed early in anticipation of potential development challenges.

Importance of PTM Control
PTMs of recombinant proteins can influence the biological activity, stability, pharmacokinetics, and immunogenicity of drug substances. Such modifications must be controlled during drug development to ensure the high quality and batch-to-batch consistency of clinical supplies. Some of the PTMs can be controlled in cell culture by CHO cell engineering and culture condition optimization. PTM control risk also can be mitigated by assessing the developability of candidate molecules at an early stage using materials produced with a scale-down manufacturing process.