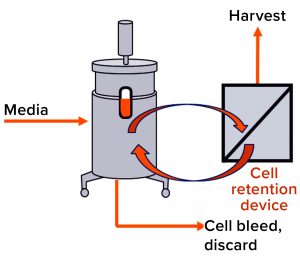 Perfusion systems offer a number of advantages over batch and fed-batch culture modes such as lower capital costs and an ability to support higher cell densities with better viability over longer manufacturing campaigns requiring shorter turn-around times. However, perfusion systems require complex operations monitoring and control because of their cell-retention systems.

At a steady state, a cell culture perfusion system has attained a target cell density with constant parameters such as media and harvest flow rate, cell viability, and pH and O2/CO2 levels. At this point, typically maintained throughout the production campaign, cells are expected to generate a consistent product quality profile. Here we discuss a case study of a routine cell culture campaign run at a steady state in which an atypical trend in one product quality attribute (PQA) was observed at the drug substance (DS) stage (Figure 2). Investigational analysis of a number of cell culture and purification process parameters indicated in this case that a decrease in cell-retention device efficiency had led to the observed atypical PQA.

Case Study: Figure 2 gives an overview of the mammalian cell culture perfusion system and subsequent purification process. During routine perfusion cell culture campaigns, which can last up to several months, it is typical to start collecting harvest/product after the process has attained a steady state. In one of these routine cell culture campaigns, an atypical PQA trend was observed at the DS stage (Figure 2) in the early-to-middle campaign stage. This atypical trend was an upward shift in the level of lowâ€“molecular-weight (LMW) product variations present (Figure 3a), indicated by one region in the size-exclusion chromatography (SEC) profile for the product (Figure 3b).

Figure 4:â€‚Investigational approach used to identify the cause of upward shift in the LMW trend

Preliminary Investigation
Figure 4 shows the approach we used to identify the root cause for the upward shift in the LMW trend. Our investigation started by confirming that all critical process parameters (CPPs) had remained within operational ranges for the entire cell culture and purification process. We performed an extensive evaluation of raw-material batches, secondary vendor changes, and process changes (Figure 5). That work included multivariate analysis (MVA) using the raw materialsâ€™ certificates of analysis (CoA).

Results: We found no correlation between process and raw material changes and therefore ruled out both as potential root causes for the upward shift in the LMW trend (Figure 5). Subsequently, we moved our investigational focus on to PQA correlations with the upward shift in the LMW trend. So we performed a correlation analysis for all DS PQAs (e.g., process step yield, protein concentration, host-cell impurity concentration, and glycosylation pattern) with the LMW trend. Our analysis indicated that all the DS quality attributes maintained typical trends and had no correlation except for one: the step yield from the affinity chromatography column (ACC).

LMW Correlation with Process Step-Yield Trend: The upward shift in the LMW trend was indirectly correlated with the ACC process step-yield trend (Figure 6). To confirm or rule out whether a specific ACC resin batch and/or pack lot (used during the purification process) was the root cause of the upward shift in the LMW trend, we performed a historical analysis (>500 DS large-scale lots) using the Tukey-Kramer method (Figure 7). This analysis confirmed an indirect correlation between LMW and ACC process step yield, which indicates that the levels of LMW present generally affect ACC process step yields. Thus, the specific ACC resin/pack lot was ruled out. 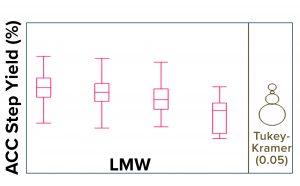 The focus of our investigation then shifted to the incoming purification starting material and cell culture batches produced in two different buildings (A and B). We plotted the DS LMW data from both buildings as in Figure 8. The upward shift in the LMW trend was specific to cell culture batches produced in building A. Therefore, despite the indirect correlation between LMW and ACC step yields (Figures 6 and 7), we hypothesized that a root cause within the purification train was unlikely because if that were the case, then the high-LMW trend would have occurred in both of the cell culture buildings. 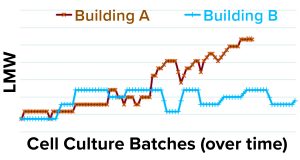 The cell-discard frequency trend indirectly correlated with the LMW trend, whereas harvest viable-cell density (VCD) and cell culture aggregation trends both correlated directly with the LMW trend. Further evaluation of the cell culture operations during the early to midcampaign stage in Building A revealed that an abrupt change/adjustment had been made to the media and harvest flow rates. The media flow rate was decreased by 10% to accommodate limited harvest storage capacity. That change kept the flow rates within the system operational range and therefore had not been flagged during operations.

Application of Cell Culture Process Understanding: To explain the correlation between the lower media flow rate and increasing LMW trend, we applied our cell culture process understanding to the three parameter trends identified by the MVA results. Cell aggregation in bioreactors increases as a perfusion campaign goes on. When cell aggregation increases, the performance of the cell-retention device starts to decrease in efficiency as cells accumulate inside it. A key point to note here is that the bioreactor operates at a relatively high temperature, whereas the cell-retention device operates at a relatively lower temperature. 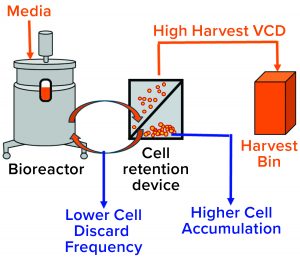 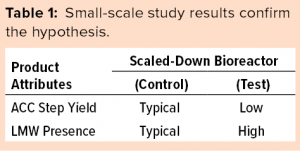 Small-Scale Cell Culture Studies
To confirm our hypothesis that enhanced cell residence time in the cell-retention device was the root cause for the high-LMW trend, we performed a small-scale cell culture study using bioreactors that were 15Ã— smaller than in the large-scale process. We ran this small-scale study in scaled-down model bioreactors, one in a control condition (typical operational conditions) and the other in a test condition (abrupt change in media flow rate by 10%). The scaled-down modelâ€™s control- and test-condition cell culture batches were purified using the scaled-down purification model illustrated in Figure 9.

The results of our small-scale study (listed in Table 1) confirm that the test condition not only caused higher LMW, but also resulted in lower affinity chromatography yield in the downstream process.

In BPI’s Novemberâ€“December issue, the conclusion of this two-part article will provide further insight into the underlying cellular mechanisms that contribute to the upward shift in the LMW trend.

Acknowledgments
We are grateful to our Bayer colleagues in Berkeley for their help: Gary Chiueh for leading the investigation and, for supporting it, Danny Hernandez, Alan Goyke, Hung Ly, Amelia Ng, Ananth Parampalli, Carmen Chin, Kostas Spetsieris, Lidia Wojnowski, and Cary Matanguihan.

Corresponding author Prasad Pathange is director, and Venkatesh Srinivasan is vice president of manufacturing sciences and technology; and Yuval Shimoni is principal quality assurance specialist in the quality risk and knowledge management group; all at Bayer US LLC, 800 Dwight Way, Berkeley, CA 94710; prasad.pathange@bayer.com.