Human mesenchymal stem cells (hMSCs) are a self-renewing population of adherent, multipotent progenitor cells that can differentiate into several lineages. The current definition of MSCs includes adherence to standard tissue culture plastic ware, expression of various surface antigens, and multilineage in vitro differentiation potential (osteogenic, chondrogenic, and adipogenic). hMSCs hold great promise as therapeutic agents because of their potential ability to replace damaged tissue and their immunomodulatory properties. Consequently, many clinical trials using hMSCs are currently under way in a number of indications, including bone and cartilage disease, cancer, heart disease, gastrointestinal disease, diabetes, and autoimmunity and neurodegenerative diseases (1). In addition, hMSCs are being used in drug discovery applications as replacements for primary cells and animal models for initial toxicity and effector function screening of new compounds (2). However, for both drug discovery and therapeutic applications, obtaining a sufficient number of cells at acceptable costs has proven to be a key challenge (3).

Multilayer, flat-bed culture methods currently used for stem cell expansion are cumbersome, time consuming, and limited in their ability to allow for the monitoring of cell characteristics throughout an expansion process. Such limitations make this method far more complex for manufacturing clinical-grade hMSCs. Furthermore, culture protocols for multilayer vessels require high labor cost, which in turn leads to high cost of goods overall. So development of culture conditions that can be monitored and derive high numbers of stem cells at low cost is warranted.

One development solution would be the use of stirred-tank bioreactors in which stem cells are grown on a microcarrier scaffold for suspension (3). In such cultures, cell samples as well as nutrient consumption can be analyzed throughout an expansion process either online or off-line. In addition, growth processes can be tightly controlled (e.g., oxygen and pH). EMD Millipore tested the utility of its 3-L single-use bench-scale bioreactor for expansion of hMSCs. Here, we report on our use of a panel of assays to monitor the hMSC expansion process.

We tested the feasibility of a new expansion paradigm using a 3-L, single-use, stirred-tank bioreactor with microcarrier scaffolds (for suspension expansion of hMSCs) for large-scale stem cell production. We grew hMSCs in Mobius CellReady 3-L bioreactors (EMD Millipore,Billerica, MA) (Photo 1). We compared results with those from multilayer flat-bed culture (10-stack) after 12–14 days. A panel of flow cytometry assays characterized cellular identity and health throughout expansion by measuring the expression of cell surface markers, cell viability, early and late apoptotic cells, and cell cycle population distribution. We assessed the cells’ ability to differentiate into various cell lineages at the end of the expansion to verify cell identity. The experiment used standard single-layer flasks of cells as control. Success would be demonstrated by equivalent or better growth, viability, marker analysis, and differentiation abilities in the bioreactor than with a 10-stack multilayer flask. 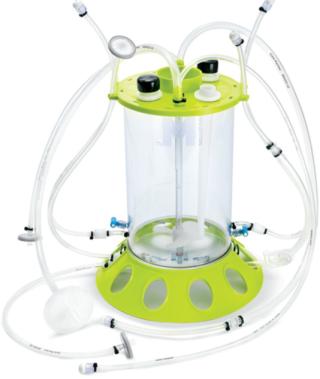 After 14 days of successful expansion in the bioreactor, 600–700 million hMSCs were harvested in 2.4-L working volume — compared with 150–200 million hMSCs from the 10-stack flat-bed culture (data not shown). Flow cytometry processes characterized expanded cells and confirmed expression of hMSC markers (CD105, CD90, CD73, CD44, and CD146). Figure 1 shows that the cells maintained their undifferentiated state throughout expansion. When compared with standard flat-bed culture expansion methods, bioreactor-expanded hMSCs showed no differences in cell viability (Figure 2A), population of early or late apoptotic cells (Figure 2B), or cell cycle distribution (Figure 2C). About 20% of the cells were in G2/M-phase, 5–10% in S-phase, and 70–75% in G0/G1-phase. Bioreactor-expanded samples had substantially more cells in the G2/M stage at day 7 than those at day 14. This suggests that measuring the cell-cycle distribution could identify the onset of senescence, which may be used to indicate an optimal harvest point. 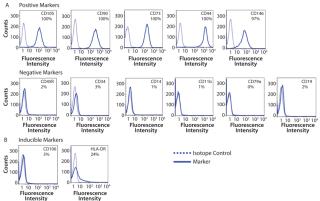 After expansion for two weeks in 10-stack multilayer flasks or bioreactors, hMSCs were exposed to media that induces the differentiation toward adipogenic, osteogenic, or chondrogenic lineages. All expanded cells, regardless of method used, maintained their multipotent differentiation abilities (Figure 3). Functional assays demonstrated that IFNγ- and TNFα-ind
uced hMSCs secreted important cytokines, including IFNγ, IL-6, IL-8, regardless of the expansion method. 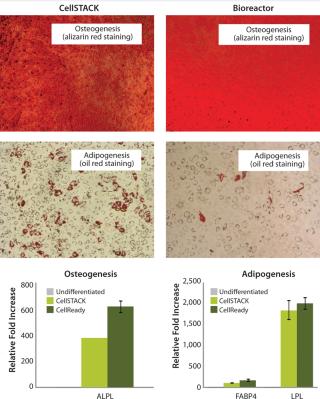 Cell characterization is a key monitoring tool during stem cell expansion. We compared the expression of a panel of cell surface antigens between hMSCs grown in bioreactors and those in 10-stack multilayer flasks. Because stem cells from bioreactors could be analyzed at any time point, we picked days 7 and 14 as examples. Cells from the10-stack multilayer flasks could be analyzed only at day 14 because of the nature of the vessel. As Figure 4 shows, expression of hMSC cell surface markers was comparable in both methods throughout expansion. 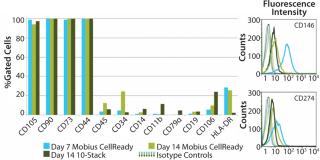 When cell growth in the bioreactor was not very good as in bioreactor 3, the apoptosis assays successfully identified a correlating change in cell state. That suggests that such assays can also be considered a process monitoring tool for use throughout expansion of hMSCs and a process quality-control indicator following expansion.

We assesed run-to-run results in bioreactor performance (A, B, C, and D) by analyzing cell-cycle and apoptosis profiles. Although conditions varied from run to run, results showed similar proportions of cells in the different phases of the cell cycle. Typically, we observed a higher percentage of cells in the G2/M phase and S phase early in the expansion process (22–36% and 9-10%, respectively) than at the end of the expansion process (10–17% and 3–6%, respectively) (Figure 6A). The percentage of cells in the G1/G0 phase at day 7 was 53–69% compared with 76–87% of cells at the end of the process. Those results indicate the culture was entering a senescence phase. Within a run, individual bioreactors performed similarly: 13–19% were in G2/M phase, 4–5% were in S phase, and 75–82% were in G1/G0 phase. 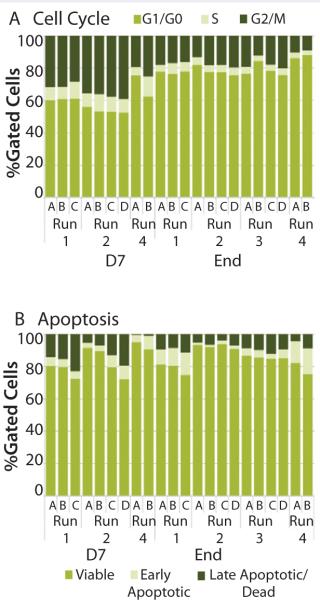 The percentage of cells classified as viable, early apoptotic, and late apoptotic did not vary significantly from run to run (Figure 6B). As expected, a wider range of results occurred at the end of the expansion process: 78–91% of cells were viable, 2–15% were in the early apoptotic fraction, and 1–10% were in the late apoptotic fraction. As the optimal growth and expansion paradigm is established, an operating range for each of those assays will be defined for use in bioreactor process monitoring.

Expansion of hMSCs in stirred-tank bioreactors using microcarriers is the first step toward establishing a scalable, single-use production process for large-scale, industrialization of stem cells. The Mobius CellReady 3-L bioreactor presents several advantages over multilayer flatbed cultures, including ease of use, reduced medium consumption (data not shown), and an ability to monitor process parameters and cell health throughout expansion. The ability to sample and monitor cells throughout expansion ensures that they are maintaining desired cell status and indicates optimal feed and harvest times. It also allows for adjustments in operating parameters to be made (if needed) while cells are still viable. Thus, cell state can be considered a process monitoring tool for expansion of hMSCs and a quality-control assessment following expansion. This system provides a cost-effective approach for producing clinical grade hMSCs and allows close monitoring of the process.