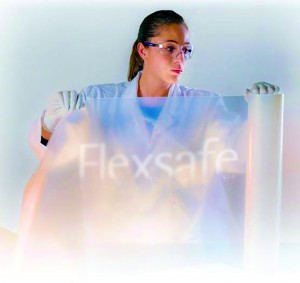 In biopharmaceutical development and manufacturing processes, single-use technology has become widely accepted (1). Storage and cultivation bags are particularly common. They are fabricated from plastics consisting of multilayer films and are typically provided gamma-sterilized by suppliers (2). The bags offer several advantages such as savings in time and cost. Lowered contamination risk results from reduced cleaning and sterilization demands. However, some adverse effects of polymer films on cell growth and metabolism have been reported, both for storage and cultivation bags with polyethylene contact layers (3, 4).

The most serious adverse effects are caused by leachable components generated in the complex bag manufacturing process, particularly during film extrusion and gamma sterilization (5, 6). Polymers and additives (antioxidants, plasticizers, or slip agents) can degrade as a consequence of the intense energetic treatment (high temperatures or irradiation). Under process conditions, this can lead to migration of leachables from the film into the process fluid (4, 7).

Important culture medium components also can adsorb onto the contact layer of a polyethylene film. Hydrophobic medium components such as cholesterol and fatty acids (linoleic or oleic acid) are prone to adsorption. Hydrophobic media additives are critical for successful growth of certain cell lines such as NS0 or other myeloma cell lines under serum-free or protein-free conditions. Kadarusman et al. focused on NS0 cells (cholesterol-dependent hybridoma cells) stored and grown in low-density polyethylene bags (9). The team supposed that poor cell growth arose in their study from cholesterol depletion caused by ink-bottleâ€“shaped pores in the film entrapping small molecules such as cholesterol.

Early identification of films impairing cell growth through migration of leachables and/or adsorption of hydrophobic components is urgently required at an early stage of bag implementation (10, 11). A new standardized test was published recently by the DECHEMA Society for Chemical Engineering and Biotechnology in Germany (5), providing a basis for comparison of different films and plastic materials along with general recommendations. The test is based on a genetically modified model CHO cell line and a chemically defined minimal culture medium, both of which are commercially available. 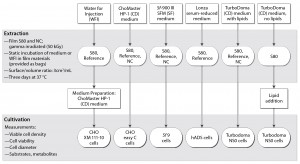 The flow chart in Figure 1 outlines our applied test procedure. We used five different cell lines to evaluate the S80 film, which consists of a product contact layer (made of linear, low-density polyethylene, LLDPE) and a backbone structure composed of a gas barrier (ethylene vinyl alcohol, EVOH) and an outer environmental layer (LLDPE) (6). By minimizing TBPP concentration in the contact layer, the supplier optimized an antioxidant package for this film. Only pharmacopoeia-listed additives were used to produce it, with no slipping agents (6, 12).

For comparison, we applied a negative control (film NC) and a reference material (a Duran Schott flask). Compared with the S80 film, a negative effect on CHO cell growth was described with the NC film due to an increased TBPP concentration in its contact layer (5, 6).

Extraction: Following the DECHEMA guidelines (5), we performed our extraction experiments within two weeks of component gammaâ€“irradiation (50 kGy). We filled two-dimensional 0.8-L (total volume) customized bags with culture medium at a surfaceâ€“toâ€“volume ratio of 3 cm2/mL. Table 1 summarizes the cell lines and respective cultivation conditions and media we used for leachable extractions.

For the CHO and mouse-myeloma (NS0) cell-based studies, we used ChoMaster HP-1 and TurboDoma chemically defined media, respectively. For Sf9 cells, we appliedÂ Sf-900 III SFM serum-free medium. Adipose-tissueâ€“derived human mesenchymal stem cells (hADSCs) were expanded in serum-reduced medium (5% FBS). For NS0 cell cultivations, we incubated the TurboDoma medium either with or without lipid components to detect interactions of hydrophobic medium components with the film layer. After the extraction process was completed, we added TurboDoma-related lipid components to the lipid-free, incubated TurboDoma medium.

As proposed by DECHEMA, we performed an additional extraction with water for injection (WFI) for the CHO XM 111-10 cell culture. This procedure was identical to that for medium extraction (Figure 1). Afterward, we used the incubated WFI for preparation of the ChoMaster HP-1 medium.

Cell Cultivations: We investigated cell growth and metabolism of all cell lines with the polyethylene films and compared the results with those from reference materials. Table 1 lists the main parameters and cultivation systems applied. By contrast with the suspension cells (CHO, Sf9, NS0) that were grown carrier-free, the adherent hADSCs grew on polystyrene microcarriers.

Results
CHO Cells: We investigated the growth behavior of two different CHO cell lines: the genetically modified CHO XM 111-10 cell line and the non-engineered CHO easy C cell line. CHO XM 111-10 cell experiments (Figure 2, left panel) started with an initial viable cell density of 0.2 Ã— 106 cells/mL. Cells cultivated in medium incubated with the S80 film showed no significant difference regarding growth and metabolism (metabolic data not shown) from those cultivated in the reference material. Cells grown in medium made from incubated WFI behaved similarly to both. For both the medium extracts and medium made from WFI extracts, cultures reached viable peak-cell densities of ~2 Ã— 106 cells/mL. Viability did not fall below 96.8% over four days in all experiments.

Sf9 Cells: Figure 3 shows the results of experiments culturing Sf9 cells in serum-free medium in an orbitally shaken TubeSpin 50 bioreactor. Both cultures demonstrated less deviation in cell growth behavior and viability thanÂ we observed with the CHO easy C cell line. As is common in Sf9 cell expansions, these experiments started with an initial viable cell density of 1 Ã— 106 cells/mL (13). Cells cultivated in medium incubated with film NC proliferated with a specific growth rate of 0.021/hour (Table 2) and reached a viable peak-cell density of 8.3 Ã— 106 cells/mL.

By contrast, growth in cell culture medium incubated with S80 film resulted in a 19% higher specific growth rate (0.026/hour) and a 23% higher viable peak-cell density (10.8 Ã— 106 cells/mL). Viable peak-cell density of the reference was 9.7 Ã— 106 cells/mL. Cell viability never fell below 98%, regardless of the extract used for Sf9 cultivation. We detected neither an increase in cell diameter nor formation of lactate, (Figure 3, right panel) â€” both of which are reported to be indicators of stressed insect cells (13â€“16).

NS0 Turbodoma Cells: Some industrial bioprocesses use cholesterol-dependent murine hybridoma cell lines, such as NS0 cells. They are popular in commercial monoclonal antibody (MAb) production processes. To exclude adsorption of lipid components to film contact layers, we performed experimental cultures of NS0 Turbodoma cells. For film extractions, we used chemically defined medium with and without TurboDoma-related lipid components. Before inoculation, lipid components were added to the lipid-free medium extracts. Film NC was not tested without lipid components.

Note that cells cultured in lipid-containing media incubated with film NC showed considerable differences from those cultured in the reference material. Specific growth rate was decreased by 55% (0.014/hour rather than 0.030/hour), and viable peak-cell density was 65% lower (0.96 Ã—Â 106 cells/mL). For film NC with lipids, such deviating growth behavior also was reflected by lactate concentration profiles (Figure 5, right panel).

A PromisingÂ Film
With our study based on DECHEMA recommendations for early investigation of critical films, we demonstrated excellent cell-growthâ€“supporting properties of the new film used in Flexsafe bags for both CHO and NS0 cells grown in chemically defined media as well as Sf9 cells cultivated in serum-free media and hADSCs expanded at serum-reduced conditions. Film NC containing the non-optimized additive package had a negative effect on growth behavior in all serum-free cultivations. Deviations in viable peak-cell densities for film NC compared with reference samples (Duran glass bottle) ranged between 15% and 69%.

From our results and the published DECHEMA study (5), we found the two CHO cell lines (CHO easy C and CHO XM 111-10) to be the most sensitive ones. However, no S80-filmâ€“induced negative effect on cell growth was detected for any of the five investigated cell lines. For both tested CHO cell lines, cell growth was comparable in the S80 film and the reference material, regardless of whether media extracts were used or medium was prepared from WFI extracts. The strong growth limitation found with the CHO easy C cell line combined with film NC most likely was caused by the effect of cytotoxic leachables released into the incubated medium. The lower growth-inhibitoryÂ effect caused by film NC in the Sf9 cell cultivations might be explained by their high initial cell density and the presence of proteins in the mediumÂ (no chemically defined culture medium is yet available for insect cell culture). But we cannot exclude the possibility that Sf9 cells may be less sensitive to bDtBPP or other cytotoxic leachables migrating from film NC. Our results obtained from culturing NS0 Turbodoma cells demonstrate that their growth was not suppressed by lipid adsorption to the S80 contact layer. Further tests will help us determine whether the poor growth characteristics detected with film NC were caused by lipid adsorption, by leachables, or by a combination of both.

Our results have shown that no cell-growth inibitory effect is caused by adsorption of media components or cytotoxic leachables from the newly developed S80 Flexsafe film.

Katharina Blaschczok is a research associate, Nina Steiger is a research associate, and Regine Eibl, PhD, is head of cell cultivation techniques at the Institute of Chemistry and Biotechnology (ICBT) in the School of Life Sciences and Facility Management at ZÃ¼rich University of Applied Sciences (ZHAW) in Switzerland. Corresponding author Gerhard Greller, PhD, is director of R&D process technologies, Elke Jurkiewicz, PhD, is a senior scientist, and Ute Husemann is manager of upstream technology; and Franziska Faulstich, PhD, is a product manager in marketing fermentation at Sartorius Stedim Biotech GmbH, August-Spindler-StraÃŸe 11, 37079 GÃ¶ttingen, Germany; 49-551-308-1306, fax 49-551-308-2062, gerhard.greller@sartorius-stedim.com.