Our focus recently had been large-scale stem-cell applications in bioreactors. We chose to work on mesenchymal stem cells because many are in clinical trials. At clinical scale, about a billion stem cells are needed per dose. Most current work is at a fairly smaller scale often using spinner flasks. So we developed a method to use microcarriers in shake flasks (instead of spinners). The Eppendorf S41i incubator shaker has a completely sealed chamber (like our CO2 incubator).

We used fairly low-speed shaking (50–70 rpm) that doesn’t require clamps, so you can put about 10 1-L flasks on the platform. Assuming 200 mL each, the S411i unit could provide 2 L total culture, so we prefer it over a spinner. There are no mixing bars and no shearing. The simplicity and capacity allow us to scale up from this culture into bioreactors. An application note on this can be accessed at www.nbsc.com.

We used a smaller Eppendorf BioBLU 5c single-use bioreactor controlled by a CelliGen BLU controller (pictured). At this 3.75-L scale, we grew about 0.43 million mesenchymal stem cells/mL peak density: ~1.6 billion for a single run. The largest model of BioBLU vessel has a 40-L working volume.

After each bioreactor run, we conducted a fluorescence-based immunoassay to test stem-cell–marker expression. Both the CD44 and CD90 stem-cell markers lit up, showing that they were properly expressed. And we developed a polymerase chain-reaction (PCR) marker assay for two other stem-cell markers. All marker expressions were proper for the stem cells. Differentiation assays showed calcium mineralization, indicating successful formation of osteocytes.

Q: How many cells did you use to inoculate the bioreactor?

Q: What type of impeller was used and why?

A: The impeller is a typical pitched blade, which provides low shear and is pretty standard for cell culture. The bioreactor comes with that impeller.

Q: What type of media was used?

A: We got the media from ATCC together with the cell line. A lot of additional nutrients were added and will be listed in the application note and poster we are preparing.

Q: Which microcarriers were used?

Q: Was foam formation a problem?

A: We’ve done a few runs and found that sparging through the sparger produces foam. We started the culture with head space overlay as the main gassing strategy and sparged only nitrogen. We also added antifoam. This controlled foaming, but the nitrogen sparging was pretty low, and we didn’t sparge any other gas.

Q: What method did you use for cell counting?

A: We used Vi-Cell and NucleoCounter instruments. We were not able to count with the former on microcarriers, so we used the latter for them and correlated between those results.

Q: Did you use a stir-and-stop inoculation strategy?

Q: Was this a batch or a fed-batch process?

A: This was a batch with media exchange.

Q: How did bioreactor data compare with the shake flask?

A: With the shake flask, we could culture enough to provide inoculation density of 30–50,000 cells/mL. On the bioreactor, we achieved over 400,000 cells/mL.

The full presentation of this first “Ask the Expert” webcast — with data — can be found on the BioProcess International website at http://bit.ly/1infJTY. 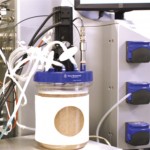 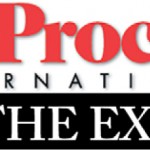