The expansion in North Carolina will create 300 jobs and is the latest investment by Pfizer in its burgeoning gene therapy network.

The $500 million (â‚¬450 million) investment in Sanford, North Carolina will see the Big Pharma firm construct a facility to support production of its recombinant adeno-associated virus (rAAV) vectors for use in its gene therapies and vaccines.

Mike McDermott, president of Pfizer Global Supply, said the Sanford expansion will â€śstrengthen Pfizerâ€™s leadership in gene therapy manufacturing technologyâ€ť and forms part of a CapEx strategy that will see the firm invest around $5 billion in its US infrastructure over the next few years. 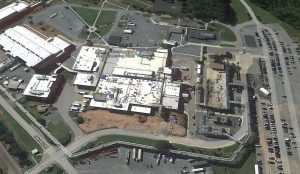 The Sanford site â€“ constructed in 2017 through a $100 million investment â€“ supports Pfizerâ€™s current gene therapy operations in North Carolina, which includes plants in Chapel Hill and Kit Creek. Kit Creek is a small-scale site aimed at developing processes using flasks and bioreactors between two and 250 liters. The Chapel Hill site works at a 250 liter scale.

The new facility will produce clinical and commercial gene therapies, though Pfizer did not respond to this publication as to its capacity or when it will come online.

Pfizer employs than 3,600 staff in North Carolina, and the new plant will add around 300 more positions.

At the time, Pfizer said it aimed to become â€śan industry leader in the field of gene therapy,â€ť and has continued to invest in the field.

In 2017, the firm inked a partnership with Sangamo Therapeutics to develop a gene therapy for hemophilia gene therapies. Earlier this year, the firm took a 15% stake in French biotech firm Vivet Therapeutics, whose lead candidate VTX-801 is set enter the clinic as a potential gene therapy for Wilson disease. And last month, Pfizer licensed an AAV delivery platform from REGENXBIO for use in a gene therapy aimed at treating neurodegenerative disease Friedreichâ€™s ataxia.

However, Pfizer is yet to prove itself in the burgeoning field and has been beaten to regulatory success on the pure-play gene therapy front by the likes of Spark Therapeutics and AveXis/Novartis, which have seen the US FDA approve Luxturna (voretigene neparvovec) and Zolgensma (onasemnogene abeparvovec), respectively.