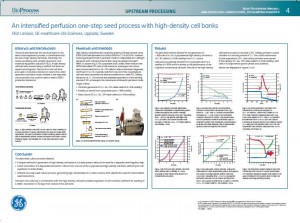 Seed culture expansion is commonly performed in several consecutive batch cultures. Starting from a cryopreserved cell stock, the initial culture expansion is typically performed in shake flasks, while the final steps are performed, at greater scales, in bioreactor vessels. Such a procedure is time-consuming and labor intensive with multiple steps that introduce risk for mishandling and contamination.

This work describes how the use of perfusion in the seed culture expansion process, in combination with the use of high-density cell banks, can drastically reduce processing time, simplify operations, and maximize equipment utilization.

The described culture process uses a GE Wave bioreactor in perfusion mode as part of a simple method for generating high-density cell banks in a closed system, without the need for a separate centrifugation step. Following cryopreservation, a single vial of the high-density cell bank was used to inoculate a 1 L starting volume in a bioreactor without prior cell expansion in shake flasks. This efficient one-step seed culture process generated high cell densities at a culture volume that eliminated the need for intermediate seed bioreactors. Expansion of the single vial using perfusion cell culture to a 10 L inoculum for a 2000 L bioreactor required only 10 days.