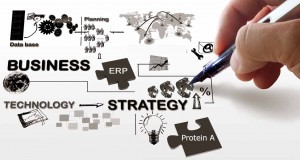 Monoclonal antibody (MAb) production has adopted an accepted technology platform for downstream processing (1). The need for more economic processes has been addressed by increasing MAb titers in fermentation and aiming toward greater bioreactor volumes to increase productivity. Consequently, cost pressures are now passed on to downstream process groups. Membrane and chromatography resin savings are more important for MAb processes than ever before, with highly productive cell cultures generating large volumes of process fluid to purify (2).

Traditionally, protein A resins have a comparably high share among the costs of consumables in MAb processing. Protein A ligands for chromatography need to be alkaline stable, highly discriminating, with low ligand leaching levels, which requires substantial effort in development of these affinity media. Large feedÂ streams also require higher downstream capacities and increase demands on labor and plant equipment, which of course increases the investment.

Debottlenecking the downstream platforms is a current concern in regard to both process capacity and cost. Only after that may manufacturers take full advantage of high titers and large bioreactor volumes. One possible approach to this challenge is to use more efficient resins, and high-capacity protein A resins seem promising.

In silico simulation of a typical MAb process can assist in detailed examination of the particular factors influencing protein A chromatography costs. Applying design of experiments (DoE), Costioli et al. reported (among other things) on the cost-effectiveness of overloading conditions for high- titer cell cultures (3). Such a study is supposed to extend derived results by two factors â€” resin capacity and the number of protein A runs per fermentation batch â€” and how they affect the cost of protein A chromatography as a unit operation. That is not linked to protein A resin price alone, but also to the cost of hardware. Identifying important factors that could provide savings in protein A chromatography was a goal of our DoE study.

Materials and Methods
Monoclonal Antibody Process: We simulated several MAb production process scenarios using SuperProDesigner software (version 8.5) from Intelligen, Inc. Although we used in silico modeling rather than actual scale-down experiments, the required computing capacity limited the number of simulations to a reasonable amount, which is why we applied DoE (2). We restricted our example MAb process to 25 unitÂ operations, eliminating some steps in early inoculum handling and waste- water treatment to yield a less complex process. Nevertheless, we kept the number of annual fermentation batches constant for both process models. We also verified the degree of simplification and how it affects the economics of an entire representative process consisting of 37 unit operations. The original process design was constructed as a average MAb process mostly based on process parameters obtained from literature (4â€“6).

Design of Experiments: We used MODDE software from Umetrics for our DoE study. The experimental design was optimized according to theÂ â€śD optimal onionâ€ť design, which allows screening for relevant factors with good design-space coverage (7). We built an eight-factorial design based on the following (Table 1):

Table 1: Investigated factors and corresponding levels (chosen according to empirical values) in the D optimal design.

Calculations are based on average costs and prices in 2013. FurtherÂ parameters and characteristics of applied unit operations â€” e.g., realistic sizes and throughput of the single unit operations â€” were obtained from the modelling programâ€™s database. For example, the protein A column size and its corresponding cost are calculated for a given set of levels. If the required volume exceeds a realistic size, then the software automatically incorporates multiple protein A columns in parallel. Optionally, the calculation can be set manually for multiple cycles of protein A on one column. 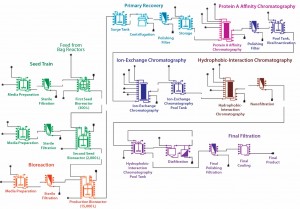 Results and Discussion
Monoclonal Antibody Process: Figure 1 depicts a simplified, representative MAb process flow scheme with 25 unit operations. Table 2 compares that simplified process with a complete one (37 unit operations) with regards to economic parameters. From the data, you can see that most of the cost for consumables and equipment is reduced in the simplified process. Because that less complex version was applied to all simulations, the error is systematic. We consider it to be negligible in
context of a model intended to illustrate trends and qualitative results rather than absolute cost calculations for a single process variant.

Figure 2: Replicate plots of total investment and unit production costs; experiments 2, 12, and 42 show significant response increases over the other experiment results. These experiments were simulated to include one protein A chromatography run per fermentation batch.

Response Replicate Plots: Figure 2 presents replicate plots for exemplary responses from our MAb process simulations. The replicate plots in connection with this process simulation are intended to identify strongly incongruous responses rather than examine experimental correctness. Response plots show increased investment and unit-production costs for experiments 2, 12, and 42. Those three experiments have in common a one-run protein A chromatography step per fermentation batch. For further data plotting, we excluded those extreme response values and their experiments from our analysis.

From simulations of that MAb process, it appears that repeating protein A chromatography for each fermentation batch would be considerably less cost-intense than using a single protein A run per fermentation batch. Required hardware is expensive for columns that can handle large harvest volumes unless a high resin capacity allows for use of a relatively smaller column.

Column hardware volume often is not proportional to hardware pricing because manufacturing big columns is technically difficult. Cranes, extra manpower for handling, and larger machine shops are required for manufacturing columns >1,000 mm in inner diameter (ID). Those special costs exponentially rise for such large columns. The relative price of a 1,000-mm ID column is ~30% of the price for that of a 1,400â€“mm IDÂ column (8). The software also calculated use of multiple separate protein A columns used in parallel, which also increases the investment but eventually allows for use of columns <1,000-mm ID.

The other main investment in protein A chromatography is the resin itself. Resin capacity does not only have an effect on column hardware cost, but also on the required amount of resin. The importance of resin capacity is also highlighted by our DoE softwareâ€™s data analysis. However, the remaining 43 experiments seem to be significantly less affected, although the amount of resin used further decreases with more protein A runs per fermentation batch. That is because of an opposing effect of decreasing column hardware cost and increasing costs for larger resin volumes. 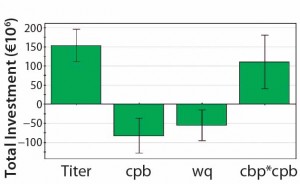 Figure 3: Significant coefficients for total investment; MAb titer has the greatest influence. The number of protein A cycles per batch (cpb) and the protein A resin capacity (wq) also affect total investment.

Figure 4: Coefficient plot for the response protein A resin cost as a part of the total consumables cost; the most important factors are resin price (price), number of possible cycles before resin replacement (cyc), and resin capacity (wq). 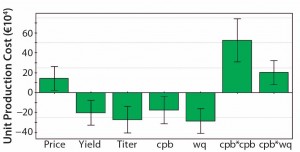 As can be expected, the achieved expression titer during fermentation is the most important factor in determining the necessary total investment for a MAb plant. Our simulation always assumes a fixed 15-mÂł fermentation volume. Thus, higher titers provide much more product (and lower cost per kilogram of MAb) but also require clearly higher investment in downstream equipment to process such large product amounts. That relationship is reflected in two additional coefficients: the number of protein A cycles per batch and the protein A resin capacity. The response factor share of the protein A resin cost as a part of the consumables cost (Figure 4) provides more insight into the protein A chromatography step.

It is not surprising that the resin price and the number of cycles before resin replacement are the two most important factors in a protein A affinity unit operation. But workingÂ capacity turns out to be important, as well. It is directly linked to resin cost because higher capacities allow for use of smaller resin volumes. That relationship highlights the benefits of high-capacity resins.

The bottom line of all considerations certainly is the production price per kilogram of MAb yielded by the downstream process as a whole. Actual production costs for high-titer MAbs are comparably low, as literature confirms (2). When accepting some assumptions, one dose can be produced and filled for US $12â€“26, depending on the required substance mass for each dose (6). Importantly, that calculation does not account for research and development, which requires tremendous investment (5). Also, MAbÂ therapy often requires long-term and frequent treatment. For example, Humira (adalimumab) from AbbVie is administered weekly or every two weeks for treatment of rheumatic diseases (9). For that particular MAb, cation- exchange chromatography is applied as a capture step (10). However, the principle of continuous administration holds true for other MAbs (9). So potential savings in drug production remain attractive. Figure 5 shows the significant model coefficients for production cost per kilogram of MAb.

Unexpectedly, protein A resin capacity has a relatively higher influence on production cost per kilogram of MAb than does protein A resin price. Capacity is linked to both plant equipment investment and the number of protein A cycles per batch â€” the latter being connected with operational cost, which influences labor cost. According to our results, savings for the average MAb process can be achieved using high-capacity resins, which was also reflected in the predicted model. 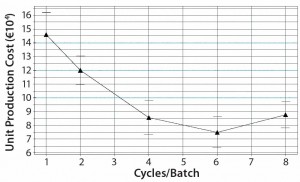 Figure 6 shows a predicted-model response surface plot comparing the production cost per kilogram of MAb with the number of protein A cycles per fermentation batch. For that plot, all other factors were kept constant at their model center-point value. 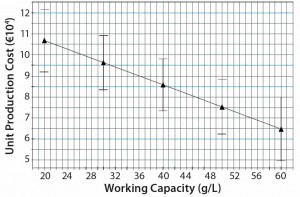 The production cost minimum is six protein A chromatography cycles per fermentation batch. That is attributable to the effects of increasing resin and hardware costs for fewer cycles and decreasing labor cost. As we expected, our purification model would further be optimized for protein A resins with high capacity (Figure 7). The higher the resin capacity is, the lower the production cost per kilogram of MAb will be. 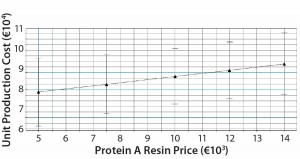 Other factors affecting the unit production price are protein A resin price (Figure 8) and MAb titer (Figure 9). The unit production cost seems to be more drastically affected by MAb titer and the number of protein A cycles per fermentation batch than by resin price or capacity. Even so, capacity has more influence on the production cost than does resin price. Although our reported values correspond to a average MAb process, the results indicate potential savings when high-capacity protein A media are used. 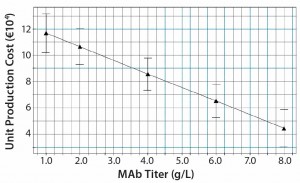 A Useful Model
This DoE study revealed connections between and among different economic parameters in a average MAb process. Protein A chromatography is a major part of downstream processing and thus offers opportunities for improving MAb productivities. Although our results rely on a average MAb process that cannot possibly take into account every single parameter, they do show trends and tendencies. High-capacity protein A resins should be considered for future MAb processes. Potential cost-saving strategies regarding process design also could focus on MAb titer and the number of protein A cycles per fermentation.