Monoclonal antibodies (MAbs) constitute ∼30% of the biopharmaceutical products currently under development (1). An increasing demand for MAbs during the past decade has led to intense development of high-expression cell cultures (2). Today, it is possible to see titers of 4–5 g/L, and expression levels as high as 15 g/L and greater have been reported. As a consequence, demand has increased for more efficient downstream processes. That demand, combined with its potential for reducing time-to-market, has increased interest in the value of platform approaches to MAb production (upstream as well as downstream). Many MAb producers are now adopting such approaches.

Today, nearly all approved MAb processes include a capture step using protein A. In generic protocols with direct capture of MAb from clarified cell culture supernatant, the high selectivity of protein A resins provides a high yield of very pure product. Protein A thus forms the foundation for the success of most MAb platform approaches to downstream processing.

WHO SHOULD READ: PROCESS DEVELOPMENT, MANUFACTURING

With the recently introduced Capto adhere multimodal anion-exchange resin, which has high selectivity for contaminants that remain after protein A separation, an additional step has been taken toward developing highly effective MAb downstream processes (3). The high purity that follows capture on protein A resins, combined with the multimodal functionality of Capto adhere resin, provides for highly productive, two-step processes (4, 5).

A platform process includes a number of unit operations, methods, and conditions based on experience gained from purifying a class of molecules that have similar properties (6,7,8,9,10). With >20 approved products and >160 in clinical trials, MAbs are just such a class of molecule (1). And the cornerstone for all MAb platforms is the unique selectivity of protein A.

A platform technology enables rapid and economical process development and scale-up. By facilitating shorter development times, it potentially helps a greater number of drug candidates pass through development laboratories. The use of highly similar platform approaches can also lead to greater robustness and smoother process transfer from development to manufacturing. 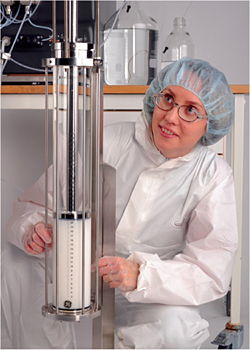 Because MAbs are similar but not identical, their platforms cannot be completely fixed in all details; they must be flexible. The chromatography steps that follow a protein A step might, therefore, shift in order or be slightly different from process to process. A toolbox concept (Figure 1) could therefore be used to establish an efficient MAb purification process. 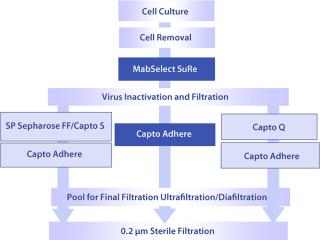 For optimal results, it is most important to optimize every step in a MAb process, including capture with protein A. Our suggested platform includes MabSelect SuRe protein A resin for capture, although MAbSelect and MabSelect Xtra brands also work very well for MAb platforms. The MabSelect SuRe product contains an alkali-stabilized, protein A–derived ligand that can be used with 0.1–0.5 M NaOH as a clean-in-place (CIP) agent, thereby prolonging its working life over that of other protein A resins (11, 12). The ligand is more stable in regards to proteolysis than a regular (native or recombinant) protein A ligand, which further reduces ligand leakage. In addition, its lack of Fab binding allows for more generic elution conditions such as pH (13) for a broad range of MAbs and Fc fusion proteins.

All that facilitates the platform approach. The unique selectivity achievable with protein A media such as MabSelect SuRe brand makes a two-chromatography step process possible. Such processes have been reported (14, 15).

GE Healthcare’s Capto adhere anion exchanger offers multimodal functionality designed for post-protein A polishing in MAb processes. Contaminants left in a product pool after protein A capture are removed by operating Capto adhere resin in flow-through mode so that they bind to the resin.

Multimodal anion exchangers have different selectivities from those of traditional strong anion exchangers (e.g., Q-types). Figure 3 compares descending pH gradient elution in bind–elute mode of five different MAbs from Capto adhere and Capto Q resins. The order of elution is the same on both, but the pH at which the different MAbs elute is considerably lower with the Capto adhere product. This indicates that it involves additional interactions and that the multimodal functionality results in different selectivity.

Capto adhere resin was initially designed for MAb purification, and its successful use in purification of an Fc-fusion protein has recently been reported (16). Nevertheless, this does not exclude using the multimodal anion exchanger in other applications such as the purification of other types of recombinant proteins.

Capto adhere resin is used following protein A in MAb purification processes. Its use to remove remaining contaminants is preferably done in flow-through mode under conditions that allow antibodies to pass directly through a column while contaminants are adsorbed. In flow-through mode, loading conditions will be a compromise between those favoring yield and those favoring contaminant clearance. So loading conditions need to be optimized, and there will be a trade-off between yield and purity. Optimization is preferably done using design of experiments (DoE).

When optimizing Capto adhere loading conditions, we have found that load, pH, and conductivity are the most important factors. Optimizing them will influence both yield and clearance of contaminants. In DoE, all factors are varied simultaneously in a structured approach. A common method is to define a reference experiment (center point) and then perform other experiments around that point.

DoE Example: The starting material was clarified cell culture supernatant containing monoclonal IgG1. Protein A chromatography used for the capture step was followed by viral inactivation at low pH. Polishing was then performed on Capto adhere resin in flow-through mode. A full-factorial design in three variables (load, pH, and conductivity) with three center points was set up to investigate the effects on yield and clearance of key contaminants: host cell proteins (HCP), dimers/aggregates (D/A), and leached protein A (Figure 4). 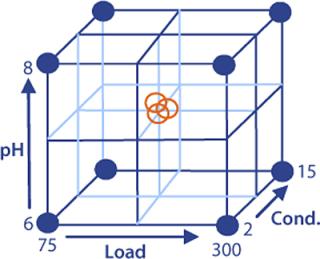 Separate models were created for yield, clearance of HCP, D/A, and leached protein A (Figure 5). The response surfaces show how load, pH, and conductivity influence the different responses and how to reach desired values for each of them. Sweet-spot analysis was performed with the following criteria for acceptance: With a load ≥100 g/L resin, yield in flow-through should be ≥90%, HCP ≤50 ppm, D/A ≤1%, and leached protein A ≤5 ppm. The sweet-spot (Figure 6) is a point (red) at which the goals for yield and contaminant clearance are fulfilled. Because the goals for HCP and protein A removal are fulfilled in the entire experimental space, the optimization in this particular example was done between yield and D/A removal. 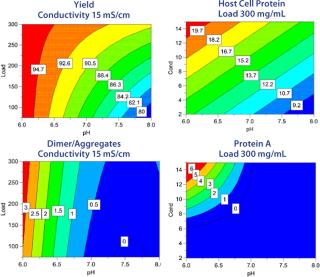 Capto adhere separation is operated so that antibodies pass directly through a column while contaminants are adsorbed. One contaminant that needs to be reduced/removed is the MAb itself in aggregated form. Using Capto adhere resin reduces not only the amount of aggregates, but also other contaminants of concern such as HCP, DNA, protein A, and viruses. Table 1 overviews the post-protein A contaminant removal that can be expected using this multimodal anion exchanger.

It is of particular interest to establish virus-removal efficiency. A study was thus performed to investigate removal of minute virus of mice (MVM) and murine leukemia virus (MuLV). Table 2 shows the results. Both model viruses are effectively removed at higher and lower ionic strengths. For a traditional anion exchanger such as a Q-resin, good virus clearance would not be expected at the higher ionic strength.

Combining a protein A resin’s high selectivity with the unique contaminant-removing properties of the Capto adhere anion exchanger makes it possible to cut many purification processes from three chromatography steps to two. To achieve this in practice, it is of utmost importance to optimize not only the multimodal anion-exchange step, but also the initial capture step. The newly developed MabSelect SuRe resin, with its alkaline-stable ligand that allows CIP with NaOH, is an obvious choice for this purpose. Key advantages are its proven long working life, high dynamic binding capacity, and low ligand leakage (11, 12, 17, 18). To further optimize the capture step, in some cases it may be necessary to develop an intermediate wash step that removes loosely bound contaminants before elution (19).

Figure 7 shows one example of a two-step purification process for a MAb. The starting material was clarified Chinese hamster ovary (CHO) cell supernatant spiked with host cell proteins (HCPs). Capture was performed using MabSelect SuRe protein A resin. After sample application, an intermediate wash was run with 20 mM sodium phosphate, 5% isopropanol, and 0.5 M NaCl at pH 7.0. Analysis of the wash fraction showed that it mainly contained aggregates and HCP (19). MAbs were then eluted with sodium citrate pH 3.4. The HCP concentration was reduced from 130,000 ppm to 55 ppm, and the remaining aggregate content was 0.7%. MabSelect SuRe eluate was then purified further in flow-through mode on Capto adhere anion-exchange resin. As can be seen from the results, contaminant removal was excellent. HCP levels were reduced to <10 ppm, and both aggregate and leached protein A levels were below detection limits.

As described here, Capto adhere resin is usually run in flow-through mode, but in some cases it could be advantageous to use it in bind-elute mode (16). In addition, some MAb preparations contain fragment levels that are too high for the final product. MAb fragments bind less strongly to this resin and could thus be separated from monomeric MAbs. Dimers and other aggregates bind more strongly and thereby elute after monomeric MAbs.

Running this multimodal anion exchanger in bind–elute mode thus has some advantages in certain situations. But it also has one major drawback: loading capacity. Loading in flow-through mode is often 100–300 g/L resin; in bind-elute mode it will be in the range 25–40 g/L. However, the possibility of using Capto adhere resin in bind-elute mode should make it an interesting alternative for cases in which its unique selectivity is required — and also for proteins other than MAbs.