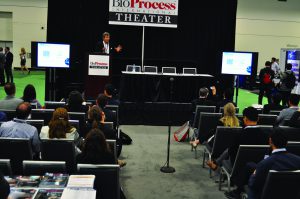 How do we know what the future will look like? If we look at preclinical products in the drug development pipeline, we know what is likely to come to the market over the next 5â€“10 years. We donâ€™t know exactly which products will succeed, but we know the kinds of products that will be available. And a company such as Lonza always wants to prepare itself to manufacture those drugs.

Lonza was founded 120 years ago in the beautiful Swiss Alps. The company has two divisions â€” life sciences and pharmaceuticals â€” and one of its five business units focuses on emerging, personalized therapies. Lonza has 10,000 employees, US$4 billion in market capitalization, and 450 patent families (mainly related to process innovations). In 2015, the global population spent a trillion US dollars on prescription drugs, which is expected to rise by $70 million every year up to $1.4 trillion for prescription drugs in 2020. The increase is driven by the rising price of drugs, new therapeutic treatments, an aging population, new modern Western diseases, and by emerging countries entering the market. From 1970 to 2010, the cost to bring a new drug product to market has increased by 30 times. Weiler does not think that such a rise will continue, but rather that it will plateau.

In 1990, one out of four drugs in the preclinical phase made it to market. In 2010, only one out of eight drugs did so (from phase 1 to commercialization). The failure rate has increased, and one reason is competition. It is extremely important to be first to market.

New therapeutic modalities comprise gene therapies, bioconjugates, genetically modified viruses, and cell therapy products. Small biopharmaceutical companiesâ€™ innovations account for 95% of such products. Many of those small companies do not have their own manufacturing capabilities, so they rely on building strategic partnerships with contract manufacturing organizations (CMOs). Lonza categorized all emerging therapies/technologies into one business unit to serve its customers from the preclinical to commercial stages. That precludes the potentially lengthy transition between development stage and commercial stages. It is important, especially in cell therapy, to keep the distance between customers and patients as short as possible. Lonza has a global footprint for doing so, with plants in Switzerland, Singapore, Tokyo, and Houston, TX.

Lonza focuses on process innovation to deliver the right quantity and quality at a reduced cost. Innovation can shorten research and development times, accelerate time to market, and allow for fast scale-up. The intellectual property (IP) of emerging therapeutics doesnâ€™t lie only in the drugs themselves but also in the processes used for making them. Companies need to protect both their product and process IP.

The industry of producing cell and gene therapies is still young. Fifty years ago, the first bone-marrow transplant occurred; in 2012, the Nobel Prize was awarded for stem cell developments. In 2015, Lonza scaled its stem cells business up to cell banking. The company offers complete cell and gene therapy services that include product scale-up and a secure supply chain. Lonza will work on process innovation â€” including automation â€” with an aim toward quantity and quality at the lowest cost.