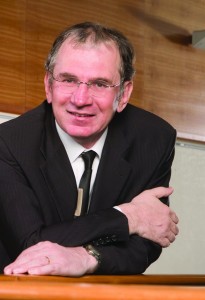 Nicoud founded Novasep in 1995 with the objective of developing comprehensive solutions for producing biologic and synthetic molecules. Novasep became a leading life-sciences company with a recognized portfolio of innovative technologies. He worked as CEO of Novasep until October 2012 and as chairman of the companyŌĆÖs supervisory board until February 2014. Nicoud just completed a book titled Chromatographic Processes: Modeling, Simulation, and Design (to be published in early 2015), in which he shares his historical passion for science and process simulation.

In November 2014, Nicoud started Ypso-Facto, a service provider helping life-sciences companies improve their production processes. I spoke with him about his perspectives on innovation in the industry, lessons learned in the industry, and projections for the future of the bioprocessing industry.

Entrepreneurship and Innovation
MM: It is often considered extremely difficult to innovate and set up a new company in France. You founded Novasep and built it from scratch 19 years ago, and it now does a turnover in excess of 300 million euro. Can you outline what you consider to be the key to your success in an environment often considered hostile to entrepreneurship?

RMN: France is not as hostile to business as sometimes depicted. It is worth mentioning the existence of a good educational system and an excellent transport infrastructure, such as the high-speed Train ├Ā Grande Vitesse (TGV) transportation network throughout France. From my experience, employees in France are generally loyal and faithful. In addition, the successive governments are normally supportive of innovation through different attractive initiatives.

I believe that France certainly could be more open to entrepreneurs, and in particular, entrepreneurs should be more often recognized and valued, as they are in other countries. I left my mandate at Novasep earlier this year, so I am not in a position to speak on the companyŌĆÖs behalf. I can only share historical and public information. As of 2013, Novasep had 75% of its employees in France and exported the majority of its products and services. Many years after their creation or acquisition, the four FDA-approved
facilities in France are still there, and (according to the companyŌĆÖs public information) perspectives are positive. That proves it is possible to grow a business in France!

MM: Do you think the business environment in France has made entrepreneurship more difficult?

RMN: That is difficult to say. There is no doubt that entrepreneurs should be more considered. But France does have a substantial R&D tax relief fund, and the federal government is financing multiple innovation centers and initiatives across the country. During my 25 yearŌĆÖs of experience, I usually received the support that I requested from the authorities to cofinance innovative projects. I donŌĆÖt see real changes even if the global economic situation is not easy. The French system is very keen on supporting development of midsize companies (500ŌĆō5,000 employees), although there are some things that we could learn from the Germans, who are certainly the champions in this arena.

As far as start-up and small companies are concerned, a limitation is possibly coming from the relation of French entrepreneurs with equity. I noted that American entrepreneurs are more open to equity sharing than are the French, who are often reluctant to open their equity to external investors. This can be a growth-limiting factor. The risk must be financed by equity, not by loans. The system ŌĆö especially the tax system ŌĆö must then allow those who took risks to get rewarded when their venture is a success.

MM: Can you share what you consider to be some of the key contributing factors to NovasepŌĆÖs historical success?

RMN: Yes certainly. The companyŌĆÖs fundamental keys to success were its passion for chemical engineering processes, science, and technology; its ability to see across industries; and an appropriate vision of industry needs. Gathering ideas from my experience in the nuclear industry, learnings from the petrochemical industry, and elements that existed in sugar industries and applying all of this to the biopharmaceutical market has proven to be an efficient approach. Certainly, the ability to recruit excellent and passionate people also made a difference.

MM: How do you see the evolution of the biotechnology industry? What do you anticipate will fundamentally change in the next 10 years?

RMN: At the moment, the pressure on biopharmaceutical cost of goods is still not huge. But that will increase and the ŌĆ£good old timesŌĆØ are going to be over. At the April 2014 Bioprocess International European Summit in Prague, SanofiŌĆÖs senior vice president of biopharmaceutical strategy (professor Wolfram Carius) said that the industry needs to be able to reduce the cost of some biotech drugs 10-fold. This is a major industry challenge. Cost pressure will make the bioprocesses engineering increasingly important.

I believe in cross fertilization across different markets: food science, chemicals, cosmetics, and so on. They all have their specificities, but the underlying concepts and tools can be transferable. In particular, the biopharmaceutical industry has a lot to learn from other industries that have experienced cost pressures for decades.

This is not to ignore specificities. Of course biotechnology is complicated. But why would this fact mean that we must renounce the use of the best scientific methods and tools available? Not only must we use these tools, we also must strive to further improve them.

Experience and Learnings
MM: Novasep was instrumental in transforming batch separation processes into continuous processes in the pharmaceutical industry. That led to the development of continuous chromatography. Can you describe the thought process that led to those exciting innovations?

RMN: Developing continuous processes has been my preoccupation even before creating Novasep. I exhibited my first continuous chromatography system in 1991, almost 25 years ago. At that time, the idea was to adapt a technology known in petrochemistry for separating optical isomers.

In parallel, a strong competency in continuous separation of sugars has been developed. The technology currently proposed for continuous purification of proteins can be seen as a combination and improvement of knowledge obtained through food and pharmaceutical processes.

It is important to understand how detailed process modeling has played a significant role in transforming the dream into reality. To operate properly, a simulated moving bed (SMB) requires five parameters to be precisely tuned. Many years ago, I used to compare the design space for continuous chromatography systems to a dark sky: Although it almost never works, somewhere there is a piece of blue in which the system works very efficiently and robustly. Finding that patch of blue is dramatically improved if you use simulation tools. The biopharmaceutical industry has a need to purify complex mixtures, and there is a flurry of activity around ongoing developments in continuous processes. It is coming!

MM: Where do you see that going? What do you see as the key challenges to establishing fully continuous downstream processing?

I see no reason why the biopharmaceutical industry would be unable to benefit from positive experience gathered over decades in other industries that produce active molecules. This being said, there is a major difference: When other industries moved from batch to continuous they were thinking big (producing more). When the biopharmaceutical industry is considering moving from batch to continuous, it is thinking small (equipment size). The existence of sizable free-batch capacities is certainly a limitation for implementing more modern concepts as well.

For now, people are still thinking about it more than really implementing it. The increasing economic pressure will accelerate the movement toward continuous processes.

Chromatography Book
MM: Tell us about your book, Chromatographic Processes: Modelling, Simulation, and Design. What were your key drivers and motivations for writing?

RMN: I have comprehensively put on paper my passion for chromatographic process modeling. This I would say is in my blood and is the raison dŌĆÖ├¬tre for all my work over the past 30 years. The┬Ābook is my contribution to the scientific design of chromatographic processes and (more generally) separation processes. It is not an easy read; it is for those who have a PhD level in engineering. Some ideas and methods are used in other industries, and the process-design concepts and methodologies can be applied to other steps in the bioprocess (such as membrane chromatography or bioreactors).

Readers will learn how scientific concepts are applied to rationally designed ion-exchange units for nuclear applications or multistep separation units. Other topics include the integradation of chromatography in complex processes,┬Āoptimization of continuous purification of optical isomers, and the creative handling of chromatography gradient.

The Future
MM: After the book, whatŌĆÖs next for you? What are your plans and why?

I strongly believe that engineering, ŌĆö a better, more in-depth understanding of processes, which the biopharmaceutical industry has been neglecting for decades ŌĆö will gain importance. Engineering optimization is not synonymous with compromising high quality. It is quite the opposite, as the FDA has recently recognized. Who would design a distillation column without knowing the boiling points of the components? This industry is still working by trial and error, and I am always astonished to realize that chromatography and airplanes were invented at the same time: at the beginning of the 20th century. Now, when they trial the Airbus 380, they know the plane will fly according to plan. And instead of prayers, they plan the ensuing cocktail party. In biotech, we are still at the prayers stage, a long way from such confidence. However, that doesnŌĆÖt mean we canŌĆÖt work toward it.

MM: Would you consider starting a new business in France?

RMN: Certainly, and this is done! The above considerations made me decide to create a new company named Ypso- Facto. Y-P-S-O is the acronym of ŌĆ£your process secured and optimized.ŌĆØ The idea is to bring scientific and industrial experience together to help life-science industries improve their production processes.