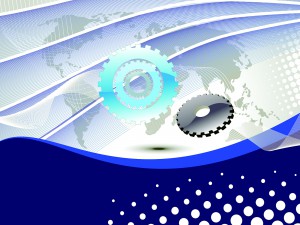 Biosimilars are a relatively new subset of biopharmaceuticals, with the biotechnology industry finally maturing such that off-patent generic-type products increasingly will be entering major markets (1ŌĆō3). So far, more than 20 biosimilars for a limited number of reference products have been approved in major markets, primarily the European Union. Only two products have been formally approved as biosimilars in the United States.

For this rapidly growing industry sector, little consensus or authoritative information is available yet regarding how and where biosimilar products will be produced. The future of their manufacturing is still up in the air. Much discussion among experts has focused on a dramatic up-tick in contract manufacturing organizations (CMOs) involvement with process development projects and clinical-scale manufacturing for biosimilars. None have really set up commercial-scale projects (yet), however. Many such companies are publicly discussing large-scale partnerships for production in India and elsewhere in Asia. On the other hand, some biosimilar sponsors are establishing relationships with smaller biotech CMOs that have demonstrated expertise in efficiency or lower-cost business models. Today, even small companies can build out clinical-scale current good manufacturing practice (CGMP) production and processing capabilities and make biosimilars more cost efficiently than reference product manufacturers could.┬ĀAnd some have proposed strategies to deliver less batch-to-batch variability by comparison.

So the future of biosimilar manufacturing remains fluid, and for many people, this uncertainty is disconcerting. Even expert analystsŌĆÖ and market-research projections for near-term biosimilars revenue span a full order of magnitude, from US$2 billion to $20 billion in annual revenue figures. Such uncertainties are far from optimal for an industryŌĆÖs new product development. Lack of information and uncertainties regarding markets and manufacturing extend to the current and future manufacturing of biosimilars. Many questions remain:

And despite continued public debate now for over a decade, there even remains much uncertainty about the names to be used for these products (4). (EditorŌĆÖs Note: See the ŌĆ£ElucidationŌĆØ on the last page of this monthŌĆÖs regular issue for more on that.)

BioPlan Associates has established a number of resources for mapping general bioprocessing capacity, including the annual biopharmaceutical manufacturing report and a free online database resource, among others (5, 6ŌĆō8). Both┬Āinclude tracking of current and future biosimilars manufacturing. Future analysis and articles will map trends driving this industry segment.

Those pipeline resources help us get a general idea of who is involved and where biosimilars development and product manufacturing are and will be taking place. For example, >1,350 follow-on biopharmaceuticals are in development, including >730 biosimilars and >480 biobetters (similar products that contain much the same active agent as a reference product but that are too dissimilar to receive biosimilar approval). Those pipeline products cover more than 130 reference products (nearly all of which are marketed recombinant products) (11). As with any broad pharmaceutical pipeline, the largest portion of products, currently 359, are in preclinical development (have yet to enter clinical trials). As of April 2016, 36 are in phase 1, 11 are in phase 2, 62 are in phase 3 (although it is often difficult to differentiate phase 2 from phase 3 trials with biosimilars), 27 have their first approval pending, and 269 are currently marketed, more than 50 of which are selling in major markets. 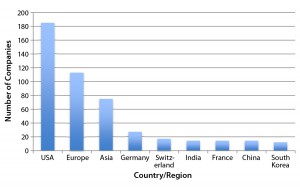 Figure 1: Regional distribution of companies currently involved with at least one major marketoriented biosimilar in their pipelines (12)

What is┬ĀKnown About Biosimilars┬ĀDevelopment
Figure 1 shows the number of companies (manufacturing, marketing, or technology sources) that are involved with one or more major market-oriented (e.g., United States or Europe) biosimilar product (11). The future largest market for biosimilars should be the same as for biopharmaceuticals. The United States is the clear leader in terms of how many major-marketŌĆōoriented companies are involved in biosimilar development. However, the development portfolios and numbers of products in the works for those US companies tend to be smaller than for businesses in other regions. Asian countries (particularly China and India) lead in term of companies involved with larger portfolios of ŌĆ£biosimilarsŌĆØ (more accurately, ŌĆ£biogenerics,ŌĆØ which are manufactured in non-CGMP environments and intended for lesser-regulated markets). 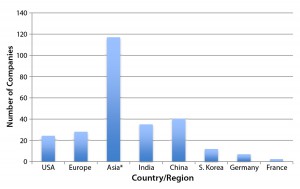 Figure 2: Regional distribution of companies currently involved with at least one international market-oriented biogeneric in the pipeline (12)

Figure 2 shows the number of companies (manufacturing, marketing, or technology sources) involved with one or more nonmajor-market (developing countries) ŌĆ£biosimilarŌĆØ or biogeneric products in their pipelines (11). Although almost no biogenerics companies are currently manufacturing to GMP standards at the US/EU level, many such companies have been making their knock-off biogenerics for some time, some even for decades. All it will take┬Āfor them is upgraded bioprocessing (a big change in some instances), and many of those companies could become sources of genuine biosimilars that meet CGMP compliance for approval as biosimilars in major markets. Many companies are already selling biogenerics in their own domestic and international markets, with nearly 200 such products currently marketed (11). 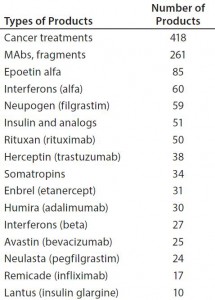 Table 1: Number of biosimilars in development for some major targets

However, it is far too early to predict biosimilar market entrants and marketing success. Particularly in the United States, biosimilar competition can be expected to be very intense (1, 2). There is and will be much competition, with many developers targeting the same reference products (Table 1).

Current biosimilar information resources, particularly the pipeline trackers, also are instructive regarding what types of biosimilars are in development ŌĆö that is, what products in the pipeline are targeting which established reference products. As Table 1 shows, the leading pipeline biosimilars in terms of reference-product targets are those aimed as competition for reference products that have blockbuster sales┬Ā(>$1┬Ābillion/year). Cancer is the most-targeted indication, and monoclonal antibodies (MAbs) and fragments are the major class of molecules currently in development, with the numbers of products in development also paralleling current biopharmaceutical blockbusters.

In that context, BioPlan Associates fully expects the biosimilars market to evolve as did the generic drugs market in many respects (1). In the United States, that will include multiple ŌĆö possibly eight or even more ŌĆö biosimilar versions initially competing with the same reference products and each other. Many biosimilar developers appear to be satisfied that they may only ever capture a small percentage of the target markets. Even a 10% share could represent a $100 million/year for a reference product that sells at over $1 billion/year. With much competition expected, we project biosimilar discounts relative to the reference products will be higher in the United States than most experts are currently projecting: in the 50% range rather than 25ŌĆō30%. And that will decrease the revenue projections comparably.

Biosimilars development cost is another subject on which industry-sourced data are lacking. Development costs probably average under $100 million, which is much lower than for comparable innovative products. With no research involved, just┬Ādevelopment, even much-discounted biosimilars capturing a small portion of a given market are likely to be profitable. Meanwhile, some new entrants and established companies seeking to broaden their existing portfolios will be more concerned with gaining market shares than about profits (at least, initially) from one or a few early and minor biosimilar products (1).

Outsourcing
Biosimilars are candidates for contract development and manufacturing, even those candidate products sponsored by large and capable companies. In fact, CMOs may be more efficient developers of such products. Biosimilars must replicate products that generally have been on the market for about two decades. So the necessary bioprocessing and analytical technologies are generally well within the capabilities and expertise of CMOs. They usually have wider experience with more products and their bioprocessing than most product sponsors, often including experience with similar products and platforms. When specialized expertise and equipment are needed ŌĆö such as for analytical characterization ŌĆö CMOs are likely to have broader experience than product sponsors as well.

By now, many capable CMOs surpass developers in biosimilarrelated bioprocessing expertise, having already worked on multiple biosimilar projects. Product developers using CMOs gain advantages that can include speeding up development. Partnering with CMOs allows sponsors to focus their efforts on more profitable or innovative products. Biosimilars are inherently meant for smaller markets, having to compete against the reference and other biosimilar products. So it often makes sense for companies to outsource biosimilar development. And of course, many new biosimilar players ŌĆö e.g., generic drug, foreign, and start-up companies ŌĆö simply lack the necessary facilities and expertise, so that they must outsource their bioprocessing work.

Most all CMOs today are involved┬Āto some extent in biosimilar development. Those currently working on multiple biosimilars for multiple clients include

Future Information Resources
BioPlan Associates has been developing a broad portfolio of biopharmaceutical industry-grounded information resources covering biologics ŌĆö and, now, biosimilars ŌĆö for over 25 years. These include industry consensus resources. Other related resources are planned, including a product documentation library, newsletters, and a biosimilars-supporting nomenclature and product registry. The US Biopharmacopeia Registry of Biopharmaceutical Products (www.biopharmacopeia.com) is already in progress.

The biopharmaceutical industry will continue to require data on the geographic distribution and concentration of biologics and biosimilars, on how new products are developed, and where that development is under way. We will continue our decades-long compilation of data on facilities capacity, new technologies, production, and product types. Combined with other research on reference products and biosimilars, proteins currently manufactured, and so on, this information will provide a useful resource concerning biosimilars manufacturing.