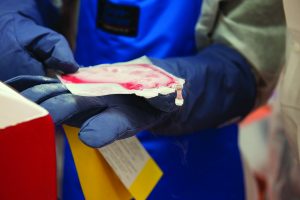 In the history of regenerative medicine, 2017 was a critical year. With approvals for Kymriah (tisagenlecleucel) from Novartis AG, Yescarta (axicabtagene ciloleucel) from Kite Pharma (a Gilead company), and Luxturna (voretigene neparvovec-rzyl) from Spark Therapeutics, cell and gene therapies finally made their mark on the regulatory landscape. Then in 2018, those products began both treating patients and bringing in revenues for their sponsor companies.

ŌĆ£Patients are being treated, and biotechnology and pharmaceutical companies are being paid for treating them,ŌĆØ said Anthony Davies (founder of cell and gene therapy specialist firm Dark Horse Consulting) to delegates at the Phacilitate Leaders World and World Stem Cell Summit 2019 in Miami, FL, this past January. ŌĆ£This is the cycle of life in drug development. We all know cell and gene therapies were approved before, but we also know that these three approvals were a singular milestone in the development of the field.ŌĆØ

Despite those approvals beckoning the way to a new frontier in medicine, the future will not be so rosy unless industry and government can balance the huge costs of these new curative therapies, he warned. ŌĆ£The field of medicine is, for the first time in history, at a position where we can make more effective medications than we can afford,ŌĆØ Davies told a packed plenary session. After launching its Kymriah chimeric antigen receptor (CAR) T-cell therapy, Novartis received criticism for its US$475,000 price tag. The Yescarta CAR-T therapy has a slightly lower list price of $373,000, and Luxturna gene therapy has a list price of $425,000 per eye. ŌĆ£This is not a first-world thing necessarily,ŌĆØ he said, ŌĆ£but just consider the second and third world.ŌĆØ WhatŌĆÖs different now, he explained, is that the medicines companies can make are both effective and becoming so abundant that based on the global gross domestic product (GDP), the world simply canŌĆÖt afford them at these prices.

And Davies pointed out that the problem is not one of ŌĆ£greed and pharmaceutical margins,ŌĆØ but rather the high cost of goods sold (CoGS) and manufacturing costs. ŌĆ£The CoGS picture is not good. This is a significant driver of pricing, and we donŌĆÖt believe that unreasonable margins are being applied by companies to their approved products. But we do feel that for those prices to come down, something serious has to be done about CoGS.ŌĆØ He added that the field ŌĆ£is in danger of sleepwalking into a CoGS crisis,ŌĆØ which poses the biggest real threat to the forward motion of regenerative medicine as a therapeutic class.

The next cell and gene therapies moving toward commercialization are unlikely to be less expensive. Previously known as AVXS-10, Zolgensma (onasemnogene abeparvovec) gene therapy is in development for the treatment of spinal muscular atrophy (SMA) by Novartis subsidiary AveXis, for example. Speaking with Davies in a fireside chat, AveXis president Dave Lennon reconfirmed comments he made in November 2018 that this product could be priced in the range of $4ŌĆō5 million per patient if it reaches the market. Although that pricing strategy has yet to be set in stone, he argued that such a price tag still would be cost effective.

ŌĆ£We have therapies now that do something completely different,ŌĆØ he said, ŌĆ£and I think we need to recognize and properly value those.ŌĆØ His company has carried out a cost analysis for the product, which has been independently validated, and the results indicate that it will be worth that much money. ŌĆ£The reality is that healthcare systems spend this type of money on caring for diseases all the time,ŌĆØ Lennon said, pointing to the high and long-term costs of treating and caring for patients with cancer and chronic diseases. This is whatŌĆÖs already being spent in the system, he said. ŌĆ£We just happen to put it into one box, which creates a lot of transparency around how much it costs to care for these kind of cases.ŌĆØ

But since the Phacilitate conference, the US nonprofit Institute for Clinical and Economic Review (ICER) has claimed that the gene therapy would be cost effective at a price range of $310,000ŌĆō$900,000, which is far lower than the range suggested by AveXis. 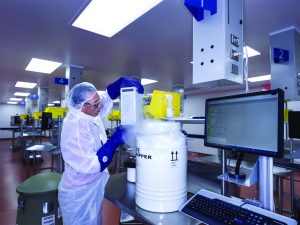 Big Pharma and CAR-T
Following successes for Novartis and Gilead, other companies are looking more seriously at T cell therapies, say venture capitalists. Big Pharma is looking at strategies to enter the CAR-T cell sector ŌĆö if theyŌĆÖre not already in it ŌĆö spurred on by 2017 approvals for Novartis and Kite Pharma.

Anna French, an associate at healthcare venture capitalist firm Qiming Ventures Partners, said that companies ŌĆ£have been scrambling to build up their T-cell capabilities. In some cases, there is a real commitment to that, and in other cases itŌĆÖs a bit more exploratory.ŌĆØ

Alberto Santagustino is head of cell and gene technologies at contract development and manufacturing organization (CDMO) Lonza. He said that 80% of innovation comes from small biotechnology companies. Historically, those are snapped up by Big Pharma corporations wanting to supplement or replace their own pipelines. That has happened in the CAR-T space for Juno, Kite, and AveXais, but other companies (e.g., bluebird, Servier, and Sangamo) remain independent but involved in Big Pharma partnerships. 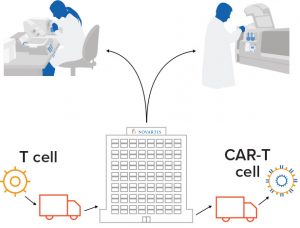 Figure 1: CAR-T cell therapies are manufactured for individual patients. Autologous CAR-T cell therapies require a paradigm shift in the approach to manufacturing, logistics, and administration. Through a collaboration with the University of Pennsylvania, Novartis made an early commitment to this emerging field. Its facility in Morris Plains, NJ, was the first manufacturing site approved by the FDA for immunocellular therapy production in the United States. So far, it has manufactured CAR-T cells for hundreds of patients around the world. (WWW.NOVARTIS.COM)

Deep Into CAR-T: Adding up regulatory successes with investments and pipelines, Novartis comes out on top in the CAR-T cell therapy space (Figures 1 and 2). The company teamed up with the University of Pennsylvania in 2011, invested in a manufacturing site the year after, and became the pioneers in CAR-T through the Kymriah approval. Perhaps buoyed by that success, Novartis has laid out plans to widen its production network and boosted its pipeline through mergers and acquisitions. It acquired AveXis for US$8.7 billion in May 2018, adding gene-therapy to its capabilities.

Gilead Sciences broke into this sector through its acquisition of Yescarta developer Kite Pharma for US$11.9 billion in August 2017, weeks before the product achieved US FDA approval. Since then, Gilead has invested in a global Yescarta network and entered a collaboration (worth up to $3 billion) with Sangamo Therapeutics to develop allogeneic therapies in oncology. 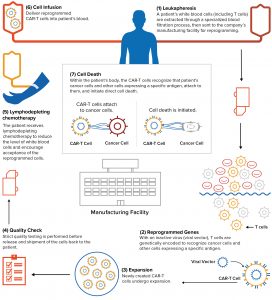 Figure 2: Individualized chimeric antigen receptor (CAR) T-cell therapies use a patientŌĆÖs own immune system to fight certain types of cancer. A patientŌĆÖs T cells are extracted and reprogrammed in culture to recognize and fight cancer cells and other cells that express a particular antigen. (WWW.NOVARTIS.COM)

Megamergers and Mixed Interest: Through a proposed $74 billion merger with Celgene, Bristol-Myers Squibb (BMS) is showing interest. If the deal goes through, it will propel BMS into the CAR-T cell therapy space. Celgene already has a partnership in place with bluebird bio, and in March 2018 it completed a $9┬Ābillion acquisition of Juno Therapeutics, adding CAR-T technology and manufacturing capabilities along with a pipeline of hematology and oncology therapies.

Takeda undoubtedly staked a claim to compete among the biggest corporations through its $62 billion takeover of Shire. Although that merger added a gene therapy candidate for hemophilia, ShireŌĆÖs pipeline was devoid of CAR-T cell therapies, which it had sold as part of its oncology portfolio to Servier in August 2018. But since then, Takeda has signed separate codevelopment deals with Memorial Sloan Kettering Cancer Center (MSK) and Noile-Immune Biotech. Furthermore, the corporationŌĆÖs acquisition of TiGenix following European approval of Alofisel (darvadstrocel) allogeneic cell therapy shows that it intends to be a serious player in regenerative medicine.

Pfizer has been involved in CAR-T cell therapies for several years through partnerships with Cellectis and Servier. But in April 2018, it sold the rights to several such assets to the newly formed Allogene Therapeutics. Pfizer took a 25% stake in Allogene (see box, next page), but this might indicate that it wants to lower its risk in developing allogeneic CAR-T products.

J&J, meanwhile, finally took the plunge into CAR-T cells in December 2017, through a $350 million worldwide collaboration and license agreement with Legend Biotech.

Waiting in the Wings: Other Big Pharma companies have been less dynamic in the cell therapy space.

GlaxoSmithKline (GSK) partnered with Adaptimmune in 2014 and in 2018 took an option to develop that companyŌĆÖs engineered T-cell therapy NY-ESO program targeting various cancers. Meanwhile, GSK transferred its rare-disease gene-therapy programs to Orchard Therapeutics, taking a 19.9% stake in that company through a deal similar to that of Pfizer and Allogene.

AstraZeneca partnered with Juno in 2015 to conduct combination clinical trials in immunooncology with a CAR-T cell therapy candidate, but according to clinicaltrials.gov, that study is a long way from completion.

Meanwhile Genentech/Roche has been quieter about CAR-T cell opportunities, although it has invested in next-generation bispecific antibodies for engaging T cells. And Eli Lilly has so far resisted the temptation of cell therapies overall. Speaking about CAR-T cells in particular early in 2019, chief executive officer Dave Ricks told Reuters, ŌĆ£The data are amazing, but practically itŌĆÖs not reaching many people.ŌĆØ

Closed Systems, Standardized Platforms
But there is hope. These are early days in regenerative medicine, still, and Phacilitate delegates believe that the cost of manufacturing will decrease. Lennon said that although the cost of innovation remains high, both his company and the industry overall ŌĆ£will get better at this, and it will get cheaper.ŌĆØ He said that his company is structured around finding the best solutions ŌĆ£wherever they are, and I think we will continue that approach. There are so many steps to optimize here. WeŌĆÖre going to continue to look at partners and [technological] advances. WeŌĆÖll explore doing that ourselves, of course, but at the same time weŌĆÖre happy to be partnering.ŌĆØ

During a panel discussion, Nicolas Danzenb├żcher (senior product manager at Miltenyi Biotech) suggested that the high price of some production methods could be reduced through ŌĆ£optimization and clever planning.ŌĆØ He said that the key areas for biomanufacturers to focus on are closed and automated systems. ŌĆ£There are no completely closed systems as yet,ŌĆØ but from a vendorŌĆÖs perspective, ŌĆ£the closer you get with the process being as closed as possible, the lower your CoGS will be.ŌĆØ

David Kneen (vice president of cell therapy at Invetech) agreed, adding that closed systems have a ŌĆ£massive impact on robustness and therefore on CoGS, but this is mostly driven by the ability to get high capacity utilization out of whatever equipment you are using.ŌĆØ

And Chris Mason (chief scientific officer of early phase gene-therapy company AvroBio) confirmed that ŌĆ£closed and automated are the future.ŌĆØ As a founding member of the Alliance for Regenerative Medicine (ARM), he warned that the lack of standardized platforms is holding back this segment of the biopharmaceutical industry. ŌĆ£WeŌĆÖre going to get to the point at which manufacturing in a closed system will have to standardize, or itŌĆÖs just not going to allow the industry to grow and realize its full potential.ŌĆØ

Before standardization can take place, however, more technology needs to be made available. ŌĆ£At the moment, we donŌĆÖt have enough closed systems,ŌĆØ Mason concluded. ŌĆ£IŌĆÖm struggling to name more than about four or five. [The sector] is so small that we are going to have to see a bit of an explosion in technology in the closed-system space to come up with the next generation.ŌĆØ

Although much work remains to bring closed and automated systems on board and thus lower biomanufacturing costs in regenerative medicine, the panel and its audience took some solace in looking back: During the early days of monoclonal antibody (MAb) production, a gram of that drug substance cost over $30,000 to make. Today that cost is just a few dollars.