When optimizing basal media and feeds, increasing key component concentrations (fortification) can help increase product titers. However, alternative methods must ensure maintenance of specific productivity later in culture. Considering the difficulties intrinsic to providing desired concentrations of key nutrients in fed-batch culture, an ideal additive would be highly concentrated, single-part, pH-neutral, and stable in both liquid and dry formats. It also could be applied to existing feeds as a partial replacement for reduction of existing volumes and would not affect final product quality.

Using a novel technology, we developed an additive that meets those criteria and overcomes many nutrient supply limitations. Here we outline how this new, functional additive has proven to be highly effective with several Chinese hamster ovary (CHO) cell lines producing immunoglobulin G (IgG) antibodies. Even without process optimization, relatively low proportional additions have resulted in over twofold improvement in product titers of several CHO fed-batch processes. The resulting ability to develop highly concentrated, pH-neutral solutions that can be delivered to any CHO culture system represents a fundamental transformation of fed-batch process development. 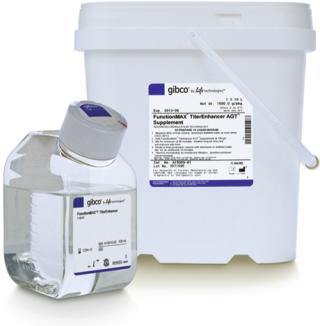 Getting around those difficulties traditionally involves separating components into multiple concentrated subgroups with different high and low pH values (6). However, that method can produce nutrient solutions with short shelf lives. It can also complicate pH control strategies for bioreactors while substantially increasing culture osmolality levels. Efforts have been made to fortify relevant component concentrations of integrated basal media and feeds to reduce the total volume of addition and minimize product dilution (2, 7). In our hands, such strategies have provided benefits we associate with the enriched environment (Figure 1). However, not all cell lines may be successful under such augmented conditions. In addition, process development organizations can become ŌĆ£locked inŌĆØ to existing fed-batch processes because of limited resources or regulatory considerations, which makes it difficult to consider substantial process changes. 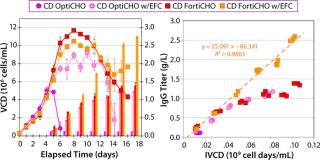 Noting the difficulties in providing desired concentrations of critical components, we applied novel technology to develop a new way to combine key nutrients in a highly concentrated (150 g/L) pH-neutral additive called FunctionMAX TiterEnhancer, which is designed to reinforce existing feeds and amplify the productivity of standard highŌĆōcell-density fed-batch platforms. This technology could transform recombinant drug bioprocessing by raising component concentrations to levels that are out of reach using conventional approaches. We have confirmed that dry and liquid formats of the additive are stable for over a year.

We demonstrated 35ŌĆō120% product titer improvements when adding the FunctionMAX TiterEnhancer product on top of existing processes or as a partial feed replacement for a lower total proportion of feed addition. Such increases were achieved primarily by maintaining qP throughout each fed-batch process, and improvements came immediately without any process optimization effort. We found that low-volume addition with FunctionMAX TiterEnhancer additive was sufficient to improve titers for several processes using different commercially available media and feeds ŌĆö and those with higher cell densities saw the most benefit. We also demonstrated that productivity can be made comparable to levels attained with enriched media and feeds but without altering product quality.

Unless otherwise indicated, all media and reagents were supplied by Life Technologies. Data that were not produced from experiments using internal cell lines (Case Studies 1 and 2) were generated by collaborators in case studies using their own proprietary cell lines.

Case Study 1 (CS1): Proprietary IgG-expressing CHO cells maintained in CD CHO medium were inoculated into shake flasks at 50-mL volumes. Control cultures were fed with 10% CHO CD EfficientFeed B (EFB) feeding supplement on days 4, 6, 8, and 10 (40% total). The FunctionMAX TiterEnhancer product was added to parallel cultures at 3.5% on days 4, 6, 8, and 10 (14% total). As required, gluco
se was added to maintain a concentration greater than 2 g/L in culture. Starting on day 3, cell counts were measured daily using an Innovatis CEDEX cell counter (from Roche Applied Science). And starting on day 6, antibody titers were measured daily with a protein A HPLC system.

Multiple Media Experiment 1 (MME1): We directly inoculated an IgG-expressing internal CHO DG44 cell line (maintained in CD OptiCHO medium with 6 mM l-glutamine) into multiple vendor media with 6 mM l-glutamine. Cell cultures were maintained in all media for seven passages before being inoculated at 65-mL shake-flask cultures containing 4 mM l-glutamine. We fed CD OptiCHO cultures with 10% CHO CD EfficientFeed A (EFA) feeding supplement on days 4, 6, and 8 (30% total), and we fed vendor media cultures according to recommended protocols. The FunctionMAX TiterEnhancer product was also added at 3.3% on days 4, 6, and 8 (10% total) where indicated. We supplemented all cultures with a 30% w/v glucose solution as required to maintain the glucose concentration above 3 g/L. Starting on day 3, we quantified cells using a Vi-CELL XR cell counter (Beckman Coulter) every two days. Starting on day 5, we measured antibody titers using a ForteBio Octet QK system (Pall Life Sciences) every two days.

Multiple Media Experiment 2 (MME2): We also maintained the same CHO DG44 cell line in CD OptiCHO medium with 6 mM l-glutamine and then directly inoculated those cells into CD FortiCHO medium with 6 mM l-glutamine. Cell cultures were maintained in both media for seven passages before being inoculated into 60-mL shake-flask cultures. We fed some CD OptiCHO cultures with 10% EFA on days 2, 4, 6, and 8 (40% total); others were fed with 5.3% EFA on days 4, 6, and 8 (16% total). We added FunctionMAX TiterEnhancer product at 5.0% on day 0 and 3.0% on days 4, 6, and 8 (14% total). CD FortiCHO cultures were fed with 10% CD EfficientFeed C (EFC) feeding supplement on days 4, 6, and 8 (30% total). We supplemented all cultures with a 30% w/v glucose solution as required to maintain the glucose concentrations above 3 g/L. Cell counts and antibody titers were measured as described for MME1.

In CS1, an increase of 120% over the control IgG titer was achieved (~3 g/L) by including FunctionMAX TiterEnhancer additive in the existing EFB process. Little change was observed in cell density profile, so the titer improvement can be attributed entirely to qP. The cell-specific rate of production improved 10-fold over the control condition after days 11 and 12 (Figure 2). Neither lactate nor ammonia was significantly different from control results. 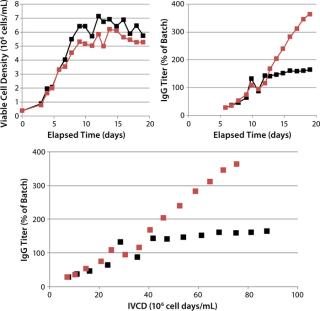 Although a minimal amount of FunctionMAX TiterEnhancer product was added on top of the control CS1 process, it was thought that the total volume of addition could have been maintained if it had been added as a partial feed replacement instead. This was tested with a different cell line in CS2 in 5-L bioreactors, which produced a similar effect. An increase of 110% over the control IgG titer was realized, again demonstrating extension of the initial culture qP (Figure 3). The cell density profile was slightly higher than in the control condition, so in this case not all the productivity enhancement can be attributed to the increased qP. 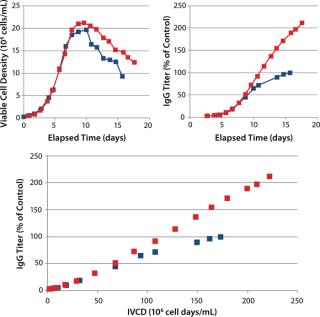 In those case studies, osmolality never extended beyond ~350 mOSm/kg, and it actually decreased over time. In theory, this would allow for osmolality to be used as a variable for process optimization rather than a constant that needs to be managed. Other case studies were performed (data not shown) that showed similar titer improvements. In one case, a 15% addition gave an increase of nearly 150% over the control IgG, and in another just a 4% addition gave an increase of 50% over the control condition.

For instance, in the VM2 example
(with cell density Ōēż5.0 ├Ś 106 viable cells/mL) it is reasonable to believe that the cells did not sufficiently challenge the nutritional depth of that medium. Consequently, nutritional limitations present in the culture would be minor, so including the FunctionMAX TiterEnhancer additive had a reduced benefit. It would follow that the response would be most positive if cell culture growth were so vigorous that even a well-designed fed-batch profile could not keep pace with the cellsŌĆÖ nutritional demands.

In MME2 (Figure 5), even a partial replacement of EFA with FunctionMAX TiterEnhancer additive and reduction in the total volume of addition (from 40% down to 30%) could deliver 105% IgG titer improvement. This experimental condition also gave 15% better productivity relative to CD FortiCHO and EFC. So the use of fortified media and feeds is not an absolute requirement for achieving high product titers. Consequently, major process changes are not a prerequisite for process improvement. Furthermore, we detected no significant glycosylation differences in the final IgG harvest from CHO DG44 fed-batch cultures with or without addition of the FunctionMAX TiterEnhancer product (Figure 6). Those results indicate that use of the additive should not adversely affect product quality.

Low-volume FunctionMAX TiterEnhancer addition has improved product titers substantially for several CHO fed-batch processes. It can be included in any cell culture system as an add-on to an existing fed-batch process or as a partial feed replacement resulting in the total addition volume being either sustained or reduced without impeding titer increase. We have confirmed that FunctionMAX TiterEnhancer addition can help maintain qP across the entire duration of fed-batch cultures. Our approach has been particularly effective in improving volumetric productivity for processes that achieve higher cell density.

We also demonstrated that FunctionMAX TiterEnhancer addition can raise performance to levels comparable to cultures that feature enriched media and feeds. Furthermore, no effect was seen in measured aspects of product quality. The new additive possesses attributes that could be considered ideal in a functional additive for reinforcing specific productivity in high-density fed-batch processes. The next step in development of this novel technology will produce complete pH-neutral feeds that are highly concentrated and stable. The technology also can be applied in customized solutions to transform process feed formulations into a highly concentrated, single-part, pH-neutral format.