During the past decade, single-use bioprocessing bags and bioreactors have gained a significant foothold in the biopharmaceutical industry because they offer a number of advantages over traditional stainless steel equipment, especially for clinical production, multiproduct facilities, and emerging economies. At the same time, some companies are concerned that plastic materials might release potentially toxic substances that could affect cell growth and product titers (1). In a worst-case scenario, they could even compromise drug safety when a company uses disposable bags for intermediate or drug substance storage.

Despite the broad acceptance of single-use bags in clinical and commercial biomanufacturing, some researchers have reported recently on inconsistent and poor cell growth of some production cell lines in various single-use bags (2–4). Hammond et al. identified a degradation product derived from a commonly used antioxidant that can be present in some commercially available single-use bags at levels that negatively affect cell growth (5, 6). However, such antioxidants are necessary to keep single-use bags stable: They protect the polymer film during gamma irradiation and protect it from oxidative degradation during extrusion and storage. Hence, it is extremely important to optimize and closely control the concentration of such antioxidants to prevent batch variability.

Other common additives are so called “slip agents,” typically oleamide, erucamide, and stearamide. Such agents act as lubricants and prevent stickiness of polymer film layers, which in turn facilitates bag fabrication and in-process use. Ideally, slip agents should be omitted to further reduce the risk of leaching substances that could potentially affect cell growth.

When Sartorius Stedim Biotech began development of its innovative S80 polyethylene (PE) film for the new Flexsafe range of bioprocess bags, the company’s vision was to establish full control and traceability of resins and additives, to fully control the manufacturing process (including film extrusion), and to guarantee industry-leading security of supply to ensure business continuity for the biopharmaceutical industry (Figure 1). The aim was to move away from the current industry practice of using resins or films based on trade names, which in essence provides no true control of polymer and additive formulations. This new film ideally should work for all single-use bag applications, both in upstream and downstream. So it should meet the various physical, chemical, and biological requirements of culture media and chromatography buffer mixing and storage, stirred-tank and rocking-motion bioreactors, intermediate and bulk drug product storage, shipping, and freeze–thaw applications (as described in the “Target Product Profile” box).

To achieve those goals, Sartorius Stedim entered into a strategic partnership with Südpack, Europe’s leading film-extrusion company. Furthermore, we established a strong collaboration with leading polymer and additive manufacturers to access and control the formulation of our polymer and additive package. That is crucial to a strong assurance-of-supply concept.

Standardized Cell-Growth Assay: During development, 25 different polyethylene multilayer film formulations (based on widely used polymers and European Pharmacopoeia listed antioxidants) were created and evaluated against the defined target product profile (TPP) of the new film. To identify potentially harmful leachables, we established a standardized cell culture assay to examine gamma-irradiated sample bags, as described in the “Standardized Cell Culture Assay” box (3, 4). We understood early on that the typically conducted USP <87> cytotoxicity testing would not be predictive of cell growth behavior. 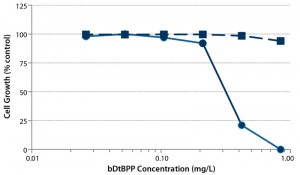 No Slip Agents and Optimized Antioxidant Package: Instead of slip agents, we applied nontoxic mechanical antiblocking based on silicon dioxide, which creates a slightly rough surface to counteract stickiness. We optimized the antioxidant package and minimized the concentration of a pharmacopeia-listed, trisarylphosphite-based processing stabilizer (sold under a number of trade names). That component is known to degrade into a reported growth inhibitory substance (5): bis(2,4-di-tert-butylphenyl) phosphate (bDtBPP).

Most important, we established the dose dependency of cell growth and viability for a model recombinant Chinese hamster ovary (CHO) cell line as a function of bDtBPP concentration (Figure 2) to ensure that our cell growth assay would identify nonsuitable formulations, which were evaluated during development of the polyethylene film. Figure 3 illustrates results from some selected film formulations. We found the “S80” formulation to be the most suitable, showing no impact on cell growth in our standardized assay or with other production cell lines (4, film 6). 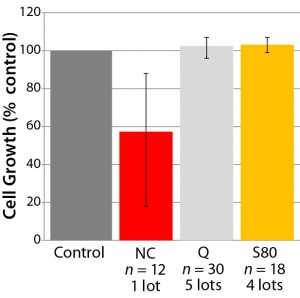 Next, we assessed the impact of extrusion process parameters on cell growth behavior within a defined window. We also performed an expert risk assessment of those parameters and their likely effects on film quality attributes. 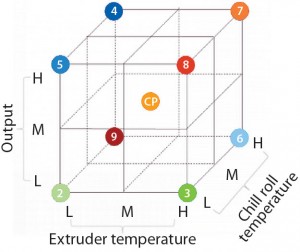 Because degradation of antioxidants continues during storage of film rolls, after γ-irradiation and dry storage of bags, we investigated the cell-growth performance of our selected film formulation in an accelerated aging study and compared the results with those of a competitor’s bag. Most notably, our S80 film formulation ensures excellent growth behavior right after γ-irradiation until the end of the aging study — representing 36 months (Figure 6) — whereas the competitor’s film results showed an initially poor growth behavior that did recover after six months of dry storage. That suggests further degradation of bDtBPP into nontoxic compounds. So our data support bag reliability from day one until the end of shelf life — batch-to-batch consistency, in other words — whereas other vendor bags may show deviations depending on storage time. 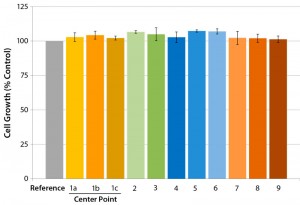 No Interaction with Culture Media

This new polyethylene S80 film should work across the full range of bioprocessing applications. Therefore, we were especially interested in understanding cell-growth performance in cold-storage applications with protein-free, chemically defined cell culture media. We considered that to be a worst-case scenario given that serum, hydrolysates, and protein additives can mask detrimental effects of toxic leachates. Gamma-irradiated test bags and borosilicate bottles (control) were filled with chemically defined medium and stored at 2–8 °C for up to six months. No negative effects on cell growth were detected using our cell growth assay (Figure 7) during the storage period. 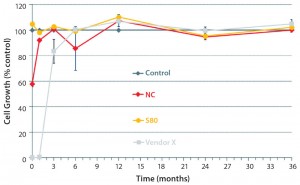 Using a quality-by-design (QbD) approach, we established a film specification that ensures excellent and reproducible cell growth, proven by a broad panel of different production cell lines and cell culture media. Together with our strategic collaboration partners in the polymer and film industry, Sartorius Stedim Biotech established full control of the new, state-of-the-art, polyethylene multilayer film formulation as well as traceability and control of polymers and additives used in it. 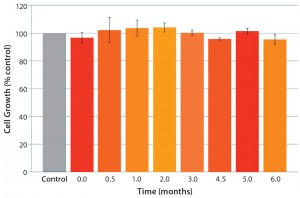 We applied a multifactorial experimental-design approach to determine operating ranges of the film extrusion. And we established operating ranges for film-welding parameters and γ-irradiation of Flexsafe bags (data not shown). Based on this unprecedented material and biological science and process control approach, we can ensure excellent and reproducible growth behavior for the most sensitive cell lines with Sartorius Stedim Biotech’s Flexsafe bags. This has been confirmed by a recently published interlaboratory test (4), in which a number of bioprocessing bags from different vendors were evaluated using a panel of different production cell lines and media. Other authors have demonstrated the suitability of Flexsafe bags for mesenchymal stem cells (8).

Controlling the complete manufacturing process — from resin to final bag — ensures consistent and reproducible quality for the new generation of Flexsafe bioprocessing bags made with the innovative S80 film. This has been proven by lot-to-lot consistency in cell-growth performance of this new multilayer polyethylene film. Understanding and controlling the film formulation and manufacturing process are key prerequisites to establish meaningful and reliable extractable and leachable data as needed for toxicological assessment of intermediate and bulk drug substance storage and stability studies.

All that combined with a robust assurance of supply concept guaranteeing uninterrupted supply of bioprocessing bags (9) is absolutely crucial to pave the way toward fully single-use bioprocessing facilities of the future. It ensures that a reproducible quality of bioprocessing bags can be supplied throughout the entire life cycle of a biologic drug — from clinical development, when single-use bioreactors and bags might be used for the first time to make or store investigational medicinal products, to many years after market launch of the final drug product.

The material science and process understanding applied during development of the new S80 film — enabled by strategic partnerships in the polymer industry — were cornerstones to delivering the new Flexsafe range of bioprocessing bags. This unprecendented traceability and control aproach answers key needs of the biopharmaceutical industry for single-use factories of the future. Sartorius Stedim Biotech’s new S80 polyethylene film sets the standard with respect to cell growth, robustness, assurance of supply, and batch consistency that are unprecedented in the industry.