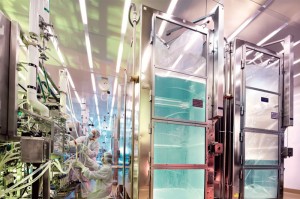 The fed-batch culture of Chinese hamster ovary (CHO) cells has become well established as the primary method of manufacturing therapeutic recombinant protein products for various disease indications. Fed-batch process-development approaches focus on supporting highâ€“cell-density cultures that are crucial to achieving high product titers but lead to proportionately high nutritional demands. Exhaustion of key nutrients negatively affects cell growth and ability to produce recombinant proteins. To counter that problem, concentrated feeds are added to the culture. Such feeds tend to be difficult to prepare because of limitations in solubility. Often, high or low pH conditions and/or heating steps must be used to dissolve feed components. In many cases, the resulting solutions have a relatively short shelf life (1, 2). 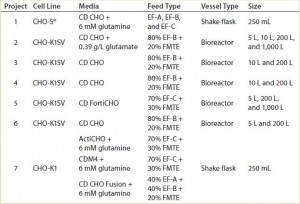 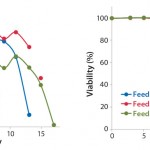 In most cases, we added FMTE to those feeds to generate solutions comprising 80% CHO CD EfficientFeed B (EF-B) with 20% FMTE or 70% CD EfficientFeed C (EF-C) with 30% FMTE. For CHO-S and CHO-K1 cells, we supplemented the basal medium with 6 mM glutamine (Life Technologies, now Thermo Fisher Scientific). For project 2, we increased glutamate to 4.5 mM by adding 0.39 g/L glutamate to the CD CHO medium. And when insufficient glucose was provided by the primary feed solutions, we used a glucose solution of 400 g/L to help maintain targeted glucose concentrations. 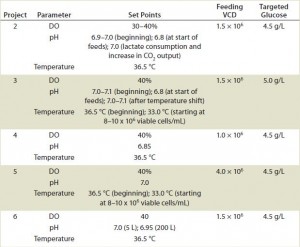 Cells were also cultivated in bioreactors ranging from 5 L to 1,000 L in capacity (Table 2). The initial working volumes were 65â€“70% of final volume, with minimal seeding cell densities at â‰Ą0.2 Ă— 106 cells/mL. We used macro-sparging for aeration and dissolved oxygen at 30â€“40%. Agitation speeds ranged from 30 to 60 rpm, depending on bioreactor volume. To control foaming, we added Antifoam C (Sigma-Aldrich) on demand, prepared as a 100,000-ppm suspension. Depending on the project, initial pH was 6.85â€“7.10, with temperature at 36.5 Â°C, and pH and/or temperature were shifted to new set points once cells reached a target density (Table 2). We maintained pH by adding 6% Na2CO3 (EMD Chemicals) when needed. 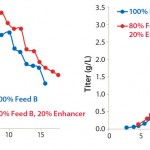 Overview of Fed-Batch Operations: Initially we conducted cell cultureÂ process development on CHO-S cells using EF-A, EF-B, and EF-C media. For subsequent projects involving the CHO-K1SV cell line, we added FMTE to EF-B or EF-C to help improve cell culture performance. Finally, we tested those feeds on CHO-K1 cells. Another goal was to establish cell culture process parameters such as pH and temperature shifts to be coupled with the EfficientFeed media to optimize cell culture output variables, specifically productivity and product quality. 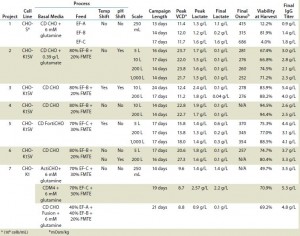 Fed-Batch Process with CHO-S Cell Line: Table 3 lists the results from each run of CHO-S cells cultured in 250-mL shaker flasks using CD CHO media with 6 mM glutamine and feeding with EF-A, EF-B, or EF-C. All growth profiles were comparable, with peak viable cell densities (VCDs) of 11â€“12 Ă— 106 cells/mL (Figure 1). Viabilities dropped drastically for cells fed with EF-A and EF-C after 13â€“14 days of cultivation, whereas viabilities of those fed with EF-B remained >80%.

We harvested the cells on days 13, 15, and 17 for those fed with EF-A, EF-B, or EF-C, respectively. Final osmolality ranged 315â€“686 mOsm/kg, with the highest measurement belonging to cells fed with EF-C. Lactate remained <2.0 g/L for all cultures, and it was actually produced and then consumed by cells fed according to the EF-A and EF-B regimen. Of the three feeds, EF-C generated the highest MAb titer of1.8 g/L at harvest, which was close to the satisfactory titer of â‰Ą2.0 g/L. It is important to point out that MAb titers for cells fed with EF-B could have been >1.4 g/L if they had been harvested past 15 days because their viability at harvest was still >80%. So we identified EF-B and EF-C as the two potential feeds for our subsequent MAb development projects.

Fed-Batch Culture of CHO-K1SV Cell Line: Projects 2â€“6 involved CHO-K1SV cells cultured in bioreactors ranging from 5-L to 1,000-L scales (Table 3). To optimize cell growth and productivity, we developed specific fed-batch process parameters appropriate to the chosen feeding regimens for each individual project. In addition, we introduced the FMTE supplement to these processes, which significantly improved yields and cell performance. 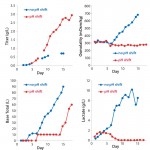 FIGURE 3: Titer, osmolality, base addition, and lactate profiles for project 2 show possible
differences caused by the presence or absence of pH shift in the fed-batch process.

We had to develop specific process parameters for project 2, particularly for implementation of pH shift at appropriate times. Figure 3 shows the two different lactate profiles from project 2. Run 1 was cultivated at pH 6.8 throughout the cell culture period, whereas run 2 was cultivated initially at 6.8 but pH was shifted to 7.0 when feeding started (at ~1.5 Ă— 106 cells/mL). When cells began to consume lactate and increase their CO2 output, we shifted the pH back to 7.0 again. That pH shift lowered base addition as well as osmolality, leading to longer and healthier campaigns producing higher MAb titers.

Using the final fed-batch process, we ran project 2 at various bioreactor scales ranging from 5 L to 1,000 L to demonstrate consistencies at different scales (Table 3). Peak VCD was 22â€“24 Ă— 106 cells/mL, and peak lactate was 1.5â€“1.7 g/L, with all runs demonstrating lactate consumption profiles. Osmolality remained low throughout these campaigns, and final osmolality values were <300 mOsm/kg. Final MAb titers at harvest were >2.0 g/L, with highest titer of 3.0 g/L achieved at the 5-L scale.

Projects 3â€“6 also produced desirable growth and productivity profiles under the developed fed-batch processes and feeding regimen (Table 3). For project 3, which used the same 80%/20% regimen as project 2, we implemented pH and temperature shifts at specific time points in the final cell culture process. Final MAb titers for project 3 were between 4.0 and 5.4 g/L, and lactate remained below 2.5 g/L, demonstrated lactate-consumption characteristics (Table 3). Project 6 also used the same feed regimen as project 2, but the specific clone used did not require the pH shift. Nonetheless, MAb titers reached 3.7 g/L at harvest, and those cells also consumed lactate after reaching a peak lactate level <2.0 g/L, in addition to low osmolalities similar to those seen in projects 2 and 3 (Table 3).

FIGURE 4: Viable cell density, viability, and titer profiles for project 5 show possible differences caused by the presence or absence of temperature shift in the fed-batch process.

For project 5, we used a mix of EF-C and FMTE mix and incorporated a temperature shift into the fed-batch process. Figure 4 shows growth and titer profiles that resulted under temperature and no temperature shift. As a result of the temperature shift, peak VCD was lower but the cell culture duration was prolonged to 17 days, so titers increased to 4.4 g/L. We also ran project 5 at the 200-L and 1,000-L scales, which also achieved titers >3.0 g/L (Table 3). The 200-L peak VCD was lower than that of the 5-L and 1,000-L scales because the 200-L temperature shift happened at ~8.0 Ă— 106 cells/mL rather than at 10.0 Ă— 106 cells/mL in the 1,000-L culture. Nevertheless, lactate and osmolality results remained relatively similar across all three scales (Table 3).

Fed-Batch Culture of CHO-K1 Cell Line: Table 3 lists results from CHO-K1 cells fed with mixes of EF-A, EF-B, EF-C, and FMTE and shows the three best medium and feed combinations discussed herein. The mix of ActiCHO and EF-C/FMTE yielded a final MAb titer of 3.5 g/L by day 14 of cultivation. Peak VCD was 9.6 Ă— 106 cells/mL, and peak lactate reached only 1.4 g/L. The mix of CDM4CHO medium and EF-C/ FMTE generated a MAb titer of 5.3 g/L at day 19 of cultivation. The mix of EX-CELL CD CHO Fusion medium and EF-A/EF-B/FMTE yielded final MAb titers of 4.8 g/L by day 21 of cultivation. Similar to the ActiCHO culture, those runs also had peak VCDs around 9 Ă— 106 cell/mL and low lactate profiles throughout.

Benefits of Fed-Batch Strategy Using FMTE: Process development work involving three different CHO cell lines and seven different antibody projects has resulted in an effective fed-batch platform process with many attractive features, including simplicity in preparation and administration of feeds, especially using the novel FMTE nutrient additive. Feeds are added continuously at a fixed flow rate, with no additional bolus feeds required during the culture period. In addition, components dissolve easily during preparation (without the need for heating or cooling), and a neutral pH is maintained throughout that process. The feeds remain stable for over three months in their liquid form, and we believe that the overall cost of raw materials is lower than for other fed-batch processes currently used in the industry.

Another benefit of our new platform process is its ability to yield desirable process outputs. For the seven different projects discussed herein, lowÂ lactate and low osmolality provided a less stressful culture environment for cultured cells, allowing for sustained high viabilities and extended culture length â€” which in turn facilitated higher MAb titers (3â€“5). Overall, we obtained MAb titers of >2.0 g/L, with 5.3 g/L being the highest measured. These outcomes demonstrate the flexibility of pairing the identified feeds with multiple media types to generate satisfactory results.

Process Refinements for Better Performance: Media and feed components are the main elements of our fed-batch process, but we needed to refine that process for it to achieve optimal performance. For example, we established specific process parameters for projects 2â€“6, including pH and temperature shifts at appropriate timesÂ during cultivation. Without a pH shift in project 2, we observed inconsistent cell culture profiles (particularity in lactate and MAb production) between cultures despite the same feed and media being used for all runs. Adding a temperature shift in projects 3 and 5 prolonged cultivation duration to allow for higher MAb titer concentrations at harvest. Although not discussed in detail herein, we increased glutamate in the basal medium for project 2 because it would be completely depleted during the campaign without that additional glutamate supply. Combining these process refinements with the FMTE supplement greatly improved the effectiveness of our media and feed components on the cell culture performance of antibody-producing CHO cells.

Scalable and Robust Performance for Clinical Manufacturing: Adoption of our new platform process provided for a simple and GMP-friendly fed-batch process. The reduced number of raw materials involved simplified raw-material inspection needs and reduced the time and efforts required to bring antibody projects to a clinical-manufacturing level. Project 2 required 13 months from clone selection to GMP drug-substance generation and was the first project to be evaluated on this new platform process. Using the fully established process, project 5 reached GMP drug substance within a year, starting from clone selection. Both projects showed consistent and robust cell culture performance in pilot-scale bioreactors (1,000 L) compared with the 5-L, 10-L, and 200-L bioreactors. Clinical manufacturing campaigns involving projects 2 and 5 demonstrated that the new platform process is scalable with minimal process deviations. So this is a highly robust and GMP-friendly platform that enables production of multiple-kilogram quantities of MAb drug substance for clinical trials.

Our fed-batch platform process was extensively developed involving three different CHO host cell lines and seven different projects, with resulting data demonstrating the effectiveness and benefits of the FunctionMAX TiterEnhancer nutrient additive for fed-batch cultivation of MAb-producing CHO cells. By implementing the new platform process, we easily achieved high productivities in addition to other desirable process attributes. The ease of operation and simplicity of the platform process enables the rapid transfer of antibody projects into clinical manufacturing. It has been proven to be a robust, reproducible, and GMP-friendly fed-batch process.

We thank our colleagues in Global Biologics Development groups at Bayer HealthCare for their contributions.