A typical cell culture process begins with thawing of a cryopreserved cell-bank vial, followed by successive expansions into larger culture vessels such as shake flasks, spinners, Wave bags, and stirred bioreactors (1). When culture volume and cell density meet predetermined criteria, the culture is transferred to a production bioreactor in which cells continue to grow and express product. This approach presents several challenges. 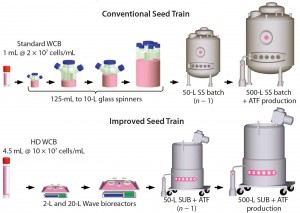 Figure 1: Comparing a conventional with an improved seed-train process for inoculation of a
500-L perfusion bioreactor; the new process uses high-density (HD) cell banking, single-use
technology, and high-density perfusion at the n â 1 stage to allow for high-density inoculation in
the production bioreactor. HD cell banking and disposables improve operational success by
reducing seed-train complexity and contamination potential. HD perfusion at the n â 1 stage allows
for HD inoculation of the production bioreactor, reducing the time to steady-state cell density by
4â5 days and increasing productivity by 10% for a 50-day run.

Shake flasks or spinners used in the initial stages require manual manipulations inside a laminar flow hood, making them vulnerable to contamination and operator error. Also, because a conventional cryopreserved cell-bank vial contains low cell numbers, the seed-train process is time consuming. It may take even longer and become more complex when production bioreactors are very large because additional large-volume culture vessels are required to support scale up to a production bioreactor. Finally, production bioreactors are usually inoculated at a density <0.5 Ă 106 viable cells/mL, so a necessary growth phase of 5â10 days offers little practical value because cell concentrations (and thus initial product yield) during that period will be low.

Industry interest in perfusion cell-culture processes has been increasing (8). Several companies have successfully used perfusion bioreactors in manufacturing commercial therapeutics (9). Perfusion processes can reach high cell densities in relatively small bioreactor volumes (10) and remove unstable product from cultures more quickly (11) than batch and fed-batch processes. Because of those and other advantages, perfusion is often considered in the context of production bioreactors rather than as an element of seed expansion.

Whitaker (12) and Heidemann (3) briefly mentioned using perfusion in seed expansion, but they did not discuss its potential to improve terminal seed-train stages, to reduce bioreactor size or steps, or to reduce the growth-phase duration for production bioreactors. Pohlscheidt (13) used a 3,000-L n â 1 perfusion bioreactor with an inclined cell settler to achieve n â 1 cell densities up to 15.8 Ă 106 viable cells/mL, decreasing cultivation times by 20% in a fed-batch production process. However, higher cell densities are hard to obtain with inclined settler devices because of perfusion rate limitations and long residence times for cells in suboptimal conditions (10).

50-mL Spin Tube Batch Refeed Model for Inoculation Density Evaluation: We removed aliquots of the culture from the n â 1 seed-train bioreactor when its cell density reached 25 Ă 106, 50 Ă 106, and 100 Ă 106 viable cells/mL and subsequently inoculated those samples into 50-mL spin tubes (TPP Techno Plastic Products) at three different inoculation densities in triplicate: 0.5 Ă 106, 2.5 Ă 106, and 5.0 Ă 106 viable cells/mL in a working volume of 10 mL. Refeeds were performed once daily because continuous perfusion could not be performed at this small scale. Starting on day 1 we refed the cultures by removing the spin tubes from their incubator, spinning cells down at 1,100 rpm for five minutes, removing the supernatant, and then adding fresh media to resuspend the cells. That refeed strategy is designed to provide the same CSPR across different inoculation density conditions. A Multitron II shaking incubator (HT Infors) maintained all spin tubes at a temperature of 37 Â°C with a rocking rate of 160 rpm, a rocking angle of 45Â°, relative humidity of 80%, and CO2 concentration of 5%. 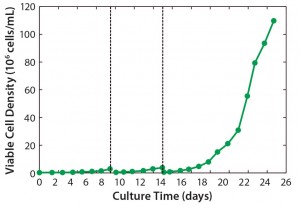 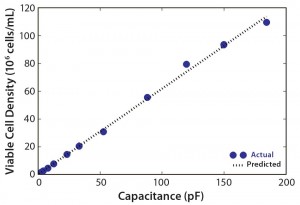 Initiated on day 2, n â 1 bioreactor perfusion was controlled to maintain a CSPR of 0.2 nL/cell/day by an online capacitance probe to automatically increase the feed rate as cell density rose. Success of such a perfusion-rate control strategy depends on the capacitance probeâs ability to accurately estimate VCD. Here, we used the strategy only until day 7 because the perfusion rate was capped at 4 RV/day, but the probe was able to accurately estimate VCD throughout the run to day 12, when 110 Ă 106 viable cells/mL was reached (Figure 3). Using control strategy during the cell growth phase allows much more accurate control of CSPR, which can be advantageous. Previous reports have shown that growth and productivity can be affected by a CSPR difference of 0.05â0.10 nL/cell/day (14). Our strategy also reduces the risk of incorrect or missed set-point changes because perfusion rate is automatically increased as the culture grows. In a stepwise approach, by contrast, operators must adjust the rate manually (15). 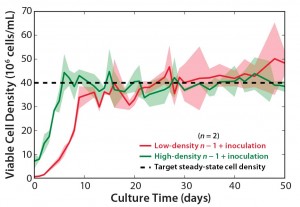 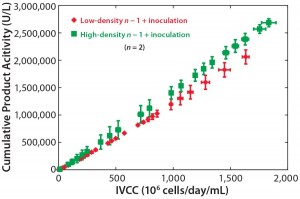 Alternatively, our seed-train process can inoculate a production bioreactor operated in either batch or fed-batch mode. For a 21-day fed-batch cell culture process using a 500-L bioreactor, an inoculation density of 5.0 Ă 106 viable cells/mL could reduce the production bioreactor duration by 25%. Overall, that could allow for an additional five to six batches per year, increasing manufacturing productivity by 25â30%. 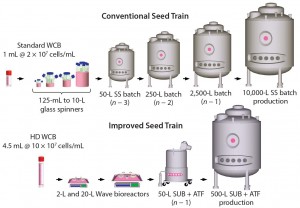 A Simplified Seed Train
We have successfully demonstrated a novel seed-train cell culture process involving HD cell banking, single-use technology, and perfusion at the n â 1 bioreactor stage. This new procedure reduces the seed-train process complexity by decreasing the number of small-scale expansion stages and eliminating the need for labor-intensive operations such as cleaning, assembly, and sterilization. Manufacturing operations can rely on the same general seed-train process with a 50-L SUB at the n â 1 stage and a 500-L SUB at the production bioreactor stage.

Use of ATF perfusion at the n â 1 stage can help cultures achieve viable cell densities â€100 Ă 106 viable cells/mL in 12 days without compromising culture growth characteristics after further expansion steps. Based on our work, a 500-L production bioreactor can be inoculated at a cell density of 5 Ă 106 viable cells/mL to reduce the time to steady-state cell density by four to five days and provide a 10% increase in the overall productivity of a 50-day run. This n â 1 perfusion technology can be adapted in several ways: An inoculation density of 10 Ă 106 viable cells/mL could be obtained in a 500-L bioreactor. For batch or fed-batch processes that require larger production bioreactors (e.g., 10,000-L), one or two stages can be eliminated from the expansion process by using a single 50-L perfusion bioreactor at the n â 1 stage.

11 Kadouri A, Spier RE. Some Myths and Message Concerning the Batch and Continuous Culture of Animal Cells. Cytotechnol. 24, 1997: 89â98.