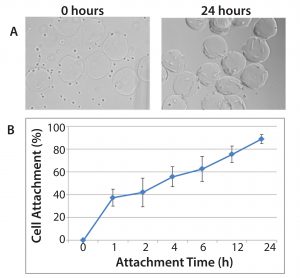 In recent years we have seen an exponential increase in the number of companies testing and validating new regenerative medicine products. Many of these products are reaching late-phase trials with the potential to receive final approval and marketing authorization from regulatory agencies such as the US Food and Drug Administration (FDA) and the European Medicines Agency (EMA). In the past several years, we have seen successful launches of regenerative medicine products, including Holoclar (Holostem Advanced Therapies), Kymriah (tisagenlecleucel, Novartis), Yescarta (axicabtagene ciloleucel, Kite Pharama), and Luxturna (voretigene neparvovec-rzyl, Spark Therapeutics).

With additional promising regenerative medicine products on the horizon, manufacturers have raised questions concerning process optimization and scalability. Many stem cells, such as human mesenchymal stem cells (hMSCs), can be readily cultivated in smaller flasks and laboratory-scale volume bioreactors. Because the dosage for clinical applications requires billions of hMSCs or anchorage-dependent cells, the challenge facing many regenerative medicine companies is the ability to commercially cost-effectively produce those cell quantities. Using multiple flasks to achieve a desired dosage would require significant investment in labor and increase the risk for variability and contamination that could arise from using numerous vessels. Therefore, an inability to cost-effectively scale up a process is a problem that can hinder further advances in regenerative medicine.

Microcarrier-based culture systems have long been thought of as the best technology to address the challenges of high-density stem cell culture for regenerative medicine. Microcarriers tend to be small beads (typically a diameter between 100 and 400 µm) that provide a high ratio of surface area to volume. They are made from inert materials such as polymers, dextran, or glass. The use of microcarriers in stirred-tank bioreactors can provide desired dosage requirements with higher cell yields. Cells grown using microcarriers can be expanded as one vessel or batch, thus reducing variability and contamination risks associated with multiple batches.

Although not all cell types can be readily expanded with microcarriers, a number of studies report successful scale-up of hMSCs on microcarriers in stirred-tank bioreactors (1, 2). These studies have shown the importance of selecting the appropriate microcarrier because factors such as material type, surface chemistry, cell seeding density, and medium composition can affect the outcome of a scale-up process. Researchers have voiced their concerns regarding microcarrier materials and surface chemistry because such components can significantly affect cell attachment and subsequent expansion. For instance, materials and surface chemistries that increase cell attachment of fastidious cells can cause problems during proliferation, expansion kinetics, and harvest. That can reduce overall cell yield and compromise phenotypic functionality of harvested cells.

To improve cell seeding and harvesting steps when working with stem cells — especially hMSCs grown on microcarriers in stirred-tank bioreactors — Corning has developed dissolvable microcarriers. They are made from cross-linked polysaccharide polymers and can be degraded effectively during cell harvest. Thus they provide a solution for large-scale expansion of hMSCs for therapeutic applications. The ability to dissolve microcarriers simplifies downstream purification processes compared with those for traditional microcarrers and eliminates the need to physically separate cells and microcarriers once a desired cell number is achieved.

Expansion of hMSC  with Animal Component-Free Dissolvable Microcarriers
To demonstrate the feasibility of hMSC expansion on dissolvable microcarriers, we conducted a scale-up study using Synthemax II–coated dissolvable microcarriers. We cultured hMSCs for seven days in defined serum-free medium, expanded to cell yields exceeding 40,000 cells/cm2 (more than seven-fold expansion). Harvested cells were characterized for marker expression, karyotype, and the ability to differentiate into adipocytes, chondrocytes, and osteocytes. 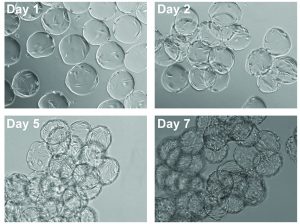 Cells were expanded on the dissolvable microcarriers for seven days with half-volume media exchanges every two to three days. We observed a uniform distribution of cells for the first two to three days of the culture, with the cells continuing to demonstrate expected cell morphology (Figure 2). At the latter phase of the culture period, the cells achieved confluency.

We harvested cells on days 5, 6, and 7 of the expansion. Complete microcarrier dissolution was observed two to four minutes after addition of the harvest solution at all time points assessed, demonstrating the ease of dissolution of the dissolvable microcarriers (Figure 3). 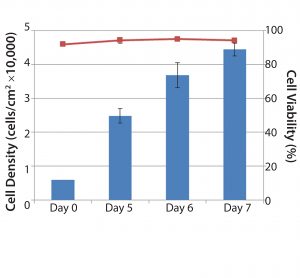 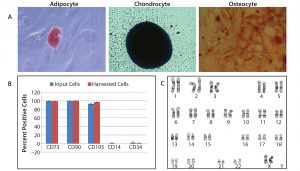 A Scalable Platform for Cell Expansion
Dissolvable microcarriers provide a scalable solution for large-scale expansion and harvest of functional hMSCs by enabling simplified downstream processing and high-yield cell recovery. We observed complete dissolution of the microcarriers during the harvest phase, which resulted in high recovery of functional hMSCs. The harvested cells maintained multipotency and demonstrated expected phenotype.

The emergence of regenerative medicine and cell-based therapies is driving demand for large quantities of high-quality cells to support clinical trials and commercial availability. Existing approaches for culturing those cells have limitations that hamper their ability to generate sufficient quantities of therapeutically active cells using well-controlled processes. Novel approaches such as the dissolvable microcarriers described above will help industrialize cell therapy development.

Acknowledgment
We acknowledge Hannah Gitschier and Christopher Suarez for their valuable input.