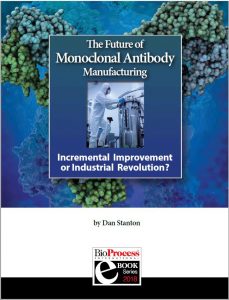 Monoclonal antibody manufacturing is at a crossroads. Biomanufacturers could continue exploring new technologies and fine-tuning proven systems such as mammalian cell expression systems in stirred-tank bioreactor fed-batch
cultures. But some experts say an opportunity is arising to turn the industry on its head by taking lessons from other branches of bioprocessing, such as the industrial enzyme sector.

Drug makers are criticized often these days for the high prices of their products. The lay media, governments, payers, and patients themselves all have voiced their share of grievances against â€śBig Biopharmaâ€™sâ€ť pricing strategies. For example, Alexionâ€™s monoclonal antibody (MAb) eculizumab (Soliris) was questioned in a 2014 guidance from the UK National Institute for Health and Care Excellence (NICE), the independent drug assessment body for the National Health Service (NHS) in England and Wales. The agency demanded to know why, from a manufacturing viewpoint, the atypical hemolytic-uremic syndrome (aHUS) treatment was priced at ÂŁ3,150 (US$4,280) per 30-mL vial. That equates to ÂŁ340,200 ($460,000) to treat one patient over 12 months, which is over 30Ă— price of other antibodies on the market. This is an extreme example, but other MAbs are far from inexpensive.

â€śThe annual acquisition cost of adalimumab (Humira) to the NHS is ÂŁ9,295 per patient (based on 26 injections per year),â€ť NICE wrote in a 2010 guidance document recommending AbbVieâ€™s bestselling MAb (1). The agency eventually recommended that the NHS in England and Wales fund Soliris, recognizing its value to patients despite not being presented â€świth a justification of why the overall cost of eculizumab was materially higher than the overall cost of other highly specialized
technologiesâ€ť.

Just fill out the form to view and download the complete eBook.