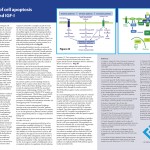 Although there were earlier descriptions of some of the cell morphological changes associated with programmed cell death, the term apoptosis was first used in the seminal paper published in the British Journal of Cancer in 1972 (2), by John Foxton Ross Kerr (born 1934), Professor of Pathology at the University of Queensland (Australia), Alastair A. Currie (1921-1994), Professor of Pathology at the University of Aberdeen (Scotland), where Kerr was on sabbatical, and his graduate student Andrew H. Wyllie (later Professor of Pathology at the University of Cambridge). In 2002, the Nobel Prize in Physiology and Medicine was given to Sydney Brenner (born 1927), a South African biologist at the Laboratory of Molecular Biology in Cambridge (UK), John E. Sulston (born 1942), a British biologist at University of Cambridge (UK), and to H. Robert Horwitz (born 1947), biologist at MIT in Boston (USA), for their work on the genetic regulation of organ development and programmed cell death in the worm Caenorhabditis Elegans.