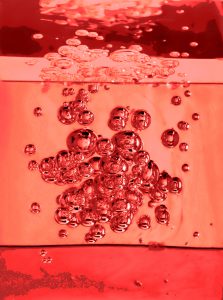 As the biologics (and now biosimilar) markets continue to grow, pressure increases on biomanufacturers to reduce cost of goods sold (CoGS). One way they can reduce cost is by increasing protein productivity in terms of protein titer per volume of culture. Media optimization is a key strategy for increasing protein productivity. In the past few decades, average titers across the industry have increased greatly â€” from <0.5 g/L in the 1980s to >3 g/L today, and it is not uncommon now to see titers of ~5 g/L (1). Despite those improvements in protein output, the drive to continue optimizing processes remains, not only to further increase expression titers, but also to improve protein quality.

As biomanufacturers continue to improve their production processes for increased protein titers, they also must ensure that protein stability, solubility, and efficacy are not negatively affected. Other challenges to increasing yield include scalability, downstream process efficiencies, and changes to the metabolic profiles of expression-system cells. If increased protein productivity leads to decreased protein efficacy, then clones that express proteins with desired efficacy will be chosen over those that exhibit high output.

Key to optimizing protein production without affecting protein quality is managing the health of cells in culture, specifically their metabolism. To create an optimal culture medium, many companies have started creating their own internal serum-free media that are specific to their operations. It is important to evaluate the culture media scheme to ensure that cells have access to critical components, such as lipids and cholesterol, which are necessary for their metabolism.

Lipids have many important functions for cells. They are an energy source, they are involved in cell signaling, and they serve as the building blocks for cell membranes. Lipids are critical to bioproduction because many steps of protein synthesis, posttranslational modification, and secretion occur on those membranes. Although cells can synthesize cholesterol and some fatty acids on their own, providing lipids from an outside source can improve their growth and metabolism in culture. Studies show that cells supplied with lipids in their culture media demonstrate improved function, which results in higher levels of protein expression per cell (2â€“5). Thus, many bioproduction scientists supply lipids to their cultured cells. However, fatty acids and cholesterol can be insoluble in media, they can be oxidized, and they can stick to bioproduction vessel walls. Therefore, bioproduction scientists often observe minimal impact on protein productivity â€” or worse, reduced cell viability â€” associated with providing lipids in cell culture media (6â€“7).

As the biopharmaceutical industry has evolved, suppliers have developed commercial media to meet its changing needs. An example of that evolution is the shift from using fetal bovine serum (FBS) to serum-free culture media and subsequent movement toward chemically defined formulations. Several serum-free chemically-defined media formulations are commercially available. To extend production run times, the same vendor companies also have developed feed supplements that are specifically optimized to their basal media. Although the media companies spend a significant amount of time optimizing basal and feed media, biopharmaceutical companies often acquire those products and then perform their own additional optimization. Thus, many approaches are used to achieve different bioproduction goals.

It is important to understand the specific goals of media optimization, which will dictate how a study is designed and how its outputs are measured and reported. Optimizing serum-free media based on clone performance has become more sophisticated thanks to the availability of increasingly advanced technologies. Modern assays to test metabolic byproducts and investigate proteomics are used to better optimize a given culture medium for a given cell line (e.g., CHO). Such assays can help companies determine the use rate of amino acids or glucose as well as identify the constituents rapidly used during a production run and those that may need replenishment (usually in the form of a feed and or feed supplements).

Although assays do exist for lipids and cholesterol, they are difficult to perform and thus do not constitute part of a standard panel for metabolicÂ analysis. It has been reported that essential fats can be beneficial for cell health and protein production (2â€“5). Further, the manner in which assay outputs are measured also depends on the goals of the study. Protein output can be reported as titer, productivity, and/or yield, with each measurement providing a different level of information.

In this study, we analyzed a lipid supplement for its ability to improve protein titer when used as a feed in different commercially available media systems for CHO cells. Although most feeds are optimized for use with a specific basal medium, this lipid supplement was designed for use in conjunction with a range of basal media and feeds.

Method
Cell-Ess feed supplement was previously shown to improve protein production at a specific concentration (8). In this case study, we optimized the feed concentration for each of three independent clones at three separate locations with three different types of culture media. We cultured DG44 and GS0 clones (from Thermo Fisher Scientific and Sigma-Aldrich, respectively) in their corresponding basal media and associated feeds, if applicable. Commercial media we used include SAFC media supplied by Sigma-Aldrich, and CD FortiCHO and CD OptiCHO supplied by Thermo Fisher Scientific. We followed the appropriate user guide for each commercial medium.

Each clone received 1% (v/v) initial lipid-containing supplement on day 0. Once weâ€™d identified the optimal feed concentration for each clone, weÂ measured the increase in monoclonal antibody (MAb) titer with the added lipids and reported the results as a percent increase over the control titer. 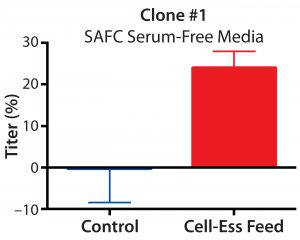 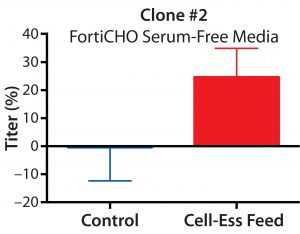 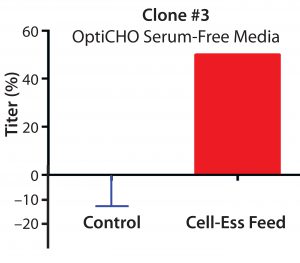 labor-intensive titrations and dilutions along with careful monitoring of cell health and productivity. A supplement or feed that provides stable and soluble essential fats would reduce the time spent preparing media and could improve protein productivity and quality. We found that addition of a lipid-containing feed supplement as a tool for media optimization did not depend on the culture media system in use.

For this study, we used titer as the measure of protein output. Defined as the amount of protein per volume and typically represented in grams per liter (g/L), it is a common measurement used during bioprocess development. Productivity is another measurement defined by volume. However, by contrast with titer, it measures protein made per viable cell at a single titer point. Productivity is a valuable measurement for considering the amount of biomass that will be passedÂ on for recovery and purification in downstream processing. A third measure of protein output is yield, which expresses the total protein made in a bioproduction run. It is critical to biomanufacturing because it drives the basic formula for how many liters and/or bioproduction runs will be needed to achieve a desired protein output.

Considerations about volume also are important with systems such as TAP Biosystems ambr microbioreactors (sold by Sartorius Stedim Biotech), where the volume may be fixed. If a feed supplement is added, then an equivalent volume will need to be removed from a microculture to maintain its volume. Whereas the volume in each culture vessel remains the same from day to day, the media composition changes as some cells and protein are removed, and the added volume dilutes the remaining cells and protein. In such cases, an equivalent volume should be removed from control vessels and an equivalent volume of control media added to have a comparable impact on media composition.

Additionally, it is important to evaluate the time point at which a measurement is taken. It is common to take titer measurements at the end of a bioproduction run, as we did during this study. However, when youâ€™re evaluating different bioprocess conditions, end-of-run measurements may not tell the whole story. For example, a specific condition may increase the protein output sooner in the culture than another, and that could provide a biomanufacturer with operational advantages. If titer isÂ measured only at the end of a run, then such information would be lost. Depending on the goals of your study, it may make sense to measure titer at different time points throughout the culture run and thus capture more information.

Truly Representative
In our study, the goal was to measure protein output using different media systems when adding a lipid supplement. We found that the supplement was successful in increasing titer for each system when compared to control conditions. The method of measurement (titer) and the time points collected were important considerations in this study design. Additionally, it was necessary to add control media to the control conditions in equivalent volume to the lipid supplement medium that was added for the experimental conditions. That aspect of the study design ensured that final titer readings would reflect an accurate comparison between the two conditions. Attention paid to those nuances in study design ensured that our results truly indicated what could be expected in a biomanufacturing environment.

8 Elhofy A. Novel Cell-EssÂ® Supplement Used As a feed or As an Initial Boost to CHO Serum Free Media Results in a Significant Increase in Protein Yield and Production. Comput. Struct. Biotechnol. J. 14, 2016: 319â€“ 324.