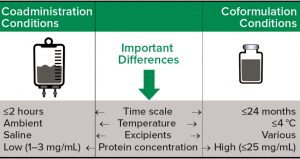 Figure 1:ŌĆéComparing considerations for analytical development of coformulated products with those of coadministered products

Coformulation of two or more proteins in a single formulation is an emerging approach to delivering multiple biotherapeutics that previously have been administered in sequence. This approach brings multiple benefits to all stakeholders. Foremost for patients, the primary benefits are combined therapeutic effects and improved convenience (e.g., fewer administration events). Healthcare providers see logistical benefits and decreased risk of medical errors. Additionally, coformulations also simplify manufacturing logistics, reduce costs of packaging and distribution, and provide new opportunities for product portfolio development and marketing. However, a coformulation approach can be used only for therapeutics that share the same dosing frequency, and it reduces dosing flexibility because of the constant ratio of products in formulation.

Drug-product manufacturers have a few options for delivering combination therapies to provide the complementary therapeutic effects of two or more biologics at once: sequential administration, coadministration by combining multiple single therapies into a single bag for intravenous (IV) infusion, or fixed-dose combination. The latter strategy commonly is used for small-molecule drugs and simple proteins.

The most prominent examples can be found in the diabetes therapeutic area, with more than 20 coformulated products currently available (1). Safety, efficacy, pharmacokinetics, and pharmacodynamics have been studied extensively and proven for two forms of coformulated insulin: aspart and diglutec (2). Two different proteins also may be coformulated, such as insulin and the enzyme hyaluronidase (3) or hyaluronidase with an antibody to facilitate subcutaneous application (4). In the immunooncology therapeutic space, a growing trend involves coformulating multiple monoclonal antibodies (MAbs) that target multiple receptors or targets: e.g., anti-PD-1 antibody in combination with another MAb, such as anti-CTLA-4 or anti-LAG-3 (5). A coformulation approach was reported recently for two broadly neutralizing antibodies in treatment of human immunodeficiency virus (HIV) (6). Other combinations of various biologics or modalities surely will be developed successfully in the future.

Formulation Development
Compared with single-agent monotherapy products, a few additional decisions must be made and considerations included in formulation development for two or more coformulated molecules. Concerns include optimal selection of dosing, the ratio of active molecules in formulation, and administration frequency for a given indication. Coformulated products currently are fixed-dose combinations that are considered for treatment of certain indications by acting on multiple different molecular targets and producing a synergetic therapeutic effect. Formulators must consider carefully the composition or ratio of active products to guarantee their stability and minimize inherent liabilities of different protein molecules. Furthermore, formulation development attributes such as pH, buffer, and excipient composition need to be adequately selected to preserve or even increase the stability of these drug products and to reduce potential, unfavorable heterogeneous interactions.

Protein therapeutics for coadministration usually are combined in an IV bag. Exposure to ambient temperature and visible light are short-term, so those mild conditions typically do not induce product degradation. On the other hand, individual proteins typically undergo some degradation processes during long-term storage ŌĆö effects that, to an extent, can be expected with coformulations. The stress conditions present during coformulation manufacturing, therefore, could affect what becomes a critical product liability later on; e.g., aggregation, deamidation, oxidation, and so on. In addition, coformulation conditions could lead to formation of heterogeneous (mixed) aggregates. 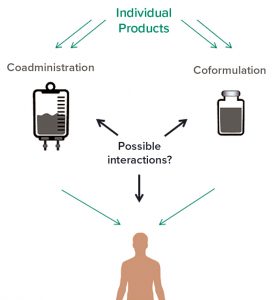 AntibodyŌĆōExcipient Interactions: Some excipients are added to stabilize protein or control viscosity, and their roles and mechanisms of action generally are understood to some extent.

AntibodyŌĆōAntibody Interactions (Homogeneous): Some form of interaction is expected in formulations and manifests as viscosity. Generally, such interactions can be controlled with excipients. Interactions leading to aggregation or particulation are the main concern.

Interactions Between Antibodies 1 and 2 (Heterogeneous): Similar to homogeneous protein interactions, some form of interprotein interaction is expected and also manifests as increased viscosity. The concern for coformulated products is formation of heterogeneous species: dimers, larger aggregates, and possibly subvisible/visible particles. The role these aggregated species play in safety and immunogenicity is not well understood.

Although in vitro interactions are possible during measurement and analysis, in vivo interactions pose a more serious challenge for pharmacodynamic and pharmacokinetic evaluations. Here, we focus primarily on analytical strategies applicable to coformulations ŌĆö and possibly to coadministration as well. 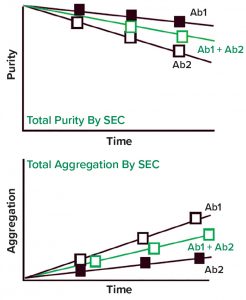 Figure 3:ŌĆéSize-exclusion chromatography (SEC) and its application to coformulated products

In some possible scenarios, total aggregation values could relate to individual products; in others, they could indicate heterogeneous interactions between antibodies. Such behavior was observed with coformulation of anti-PD1-L1 and anti-CTLA-4 antibodies (7). Those interactions may result in more complex behavior in formulation, as has been shown for bispecifics compared with coformulation and monotherapies (8). 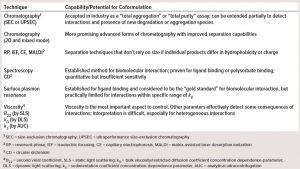 Table 1:ŌĆéThe potential of currently used methods in product characterization for use in coformulation analytics

However, because of SECŌĆÖs lack of specificity, probing aggregation with this technique is significantly challenging. It is difficult to distinguish which molecular species are involved in aggregate formation. Thus, for analyzing coformulations, alternative separation techniques that offer the potential to trace the source of product degradation must be considered. For this purpose, newer concepts such as two-dimensional (2D) or mixed-mode chromatography combining different separation principles (e.g., size exclusion with hydrophobic interaction) might be more suitable than SEC. 2D chromatography is useful in characterizing single-entity products (9) and undoubtedly has potential to be applied for coformulated products as well. Other possible alternatives to simple SEC include spectroscopy and separation techniques that do not rely on size.

In summary, multiple methods are used routinely for product characterization, several of which are ŌĆ£interaction sensitiveŌĆØ to an extent ŌĆö or can at least detect some consequences of interactions (Table 1). 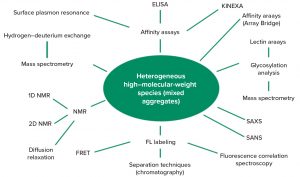 Emerging Analytical Methods: Currently used analytical methods originally were not developed for coformulations or for evaluating interactions between antibodies (or any other proteins, for that matter). They are either not sensitive enough or unable to detect interactions over the timescale of a productŌĆÖs shelf life. Thus, the industry suffers an outstanding need for developing new methods and strategies that can be applied to detecting mixed aggregates through coformulated productsŌĆÖ shelf lives. Figure 4 highlights a number of promising strategies to detect mixed aggregates.

It is important to consider method capabilities when selecting analytical technologies. A general, widely accepted approach to characterization of interactions is measuring kD, the parameter of bulk viscosity/restricted diffusion interaction; however, it probably would be difficult to apply that for the kinetics of heterogeneous aggregation. Individual products are known to aggregate over long storage periods, and possible aggregation (including heterogeneous) is to be expected in coformulations stored over long periods. Currently, no standard methods have been established or accepted by the industry for measuring mixed aggregates. However, a few emerging techniques show great potential to detect and/or quantify heterogeneous aggregates based on mass spectrometry (MS), fluorescence labeling (FL), and nuclear magnetic resonance analysis (NMR).

Mass Spectrometry: Complex mixture analysis remains, in some regard, one of the greatest challenges in the field of measurement science. Especially when coupled to online separations such as reversed-phase liquid chromatography or capillary electrophoresis (CE), high-resolution MS offers one of the most powerful tools for addressing these challenges. Advanced MS analysis of large proteins is pertinent to developing methods for characterization of complex mixtures of proteins (e.g., MAbs) because it can detect weakly bound dimers. Heterogeneous dimers could be detected in coformulations using combined separation techniques (e.g., CE-MS); gas-phase fragmentation chemistries, such as electron-transfer dissociation (ETD), which is used for top-down protein analysis; and deconvolution algorithms of complex mass spectra.

Fluorescence Labeling: Development of MAb-based coformulations raises new challenges for high-throughput analyses. First, it is difficult to understand whether MAbs in mono- and coformulations present the same chemical stability profiles. Second is the problem of understanding potential proteinŌĆōprotein and proteinŌĆōexcipient interactions.

Those challenges require screening a vast array of conditions: e.g., protein concentrations, stress conditions, and both the types of excipients and combinations thereof. ThatŌĆÖs why biochemical fluorescent tools compatible with a high-throughput approach are used to monitor both protein oxidation reactions and the molecular dynamics of proteinŌĆōprotein and proteinŌĆōexcipient interactions. F├Črster-resonance energy transfer (FRET) is a common technique for detecting protein interactions. It requires labeling antibodies with fluorescent dyes and therefore comes with the risk of modifying antibody properties. Indeed, the most common labeling chemistry is based on derivatization of primary amines, which can change the charge densities of labeled proteins. Thus, despite the high sensitivity of fluorescent assays, implementation of such techniques in drug formulation sciences requires acute control of labeling chemistries.

Nuclear Magnetic Resonance: Translational self-diffusion and relaxation measurements are sensitive to interactions over a broad range of affinities (mMŌĆōpM), specificities, and stoichiometries. Proton NMR spectra provide quantitative concentration measurements; 1D and 2D NMR profiling methods can differentiate proteins in mixtures based on chemical shift patterns that are unique to each protein. Formulated protein mixtures can be measured thusly in situ with no labeling required.

Computational Tools: Additionally, computational modeling offers complementary tools to characterize and predict the behavior of drug substances in coformulations. A number of protein models ŌĆö ranging from atomistic to simplified coarse-grained and colloidal representations ŌĆö can be used to probe different molecular processes that alter the stability of individual products and how they will be influenced by crossinteractions among proteins and/or excipients in formulation.

Some drug-product attributes in coformulations might be estimated readily through molecular simulations and theoretical modeling, including virial coefficients, diffusivity, viscosity, solubility, critical opalescence, and phase behavior (e.g., criticality for liquidŌĆōliquid equilibrium and crystallization). That could help guide development of coformulations and greatly facilitate identification of a suitable drug formulations (including optimal ratios of active products).

Furthermore, computational models for biotherapeutic coformulations could prove to be invaluable for analyzing high-resolution, structural data such as those obtained from NMR, MS, and small-angle scattering experiments. These models could help formulators distinguish the contributions from each individual species to experimental data and help relate macroscopic behavior to specific molecular events.

Work To Be Done
Coformulation of two or more antibodies brings multiple benefits and concomitant challenges. These are issues that the biopharmaceutical industry is addressing. Further development of existing methods originally used for singly formulated products and methods for detection of heterogeneous interactions are the most urgent needs to promote successful development of coformulated products. Present challenges include evaluating possible immunogenicity of heterogeneous highŌĆōmolecular-weight species and establishing clinical and regulatory strategies for coformulated products.