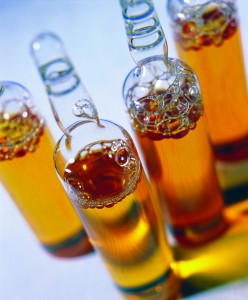 Monoclonal antibodies (MAbs) are at the focal point of biologics development. Many of the best-selling drugs are therapeutic MAbs or related proteins (1ā€“2). The combined world-wide sales from MAbs will be nearly US$125 billion by 2020 (3). About 50 MAb products treating a range of diseases have been approved in the United States or Europe. With the large number of MAbs progressing through discovery, biomanufacturers need to accelerate process development and move projects rapidly into clinical manufacturing (4ā€“5). Formulation development, an important aspect of product development, is often on the critical path to successful clinical manufacturing and stability studies, which are essential to investigational new drug (IND) filings. Discussions on leveraging platform processes to shorten process development timelines and save resources often focus primarily on upstream and downstream operations (6ā€“7). Here we describe a rapid platform strategy for formulationĀ development successfully used for MAbs by Patheon Biologics. 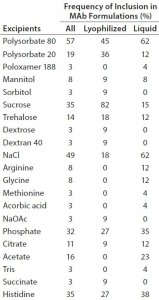 Table 1: Summary of excipients used in a number of commercial MAb formulations (6)

Overview of Commercial MAb Formulations
By studying commercial MAb products, we established a rich database for successful MAb formulations. Although every antibody is unique, the molecules are highly similar structurally. Lessons learned from successful examples are invaluable in developing stable and effective formulations for new MAbs.

We summarized 37 formulations that have been successfully used in commercial MAbs, including fragment antigen-binding (Fab) and antibodyā€“ drug conjugates (ADCs). Among them, 12 are lyophilized formulations and 25 are liquid formulations, with their concentration ranging from 2Ā mg/mL to 200 mg/mL. Table 1 lists excipients used in these MAb formulations. Some commonalities can be observed:

A Platform Approach
At Patheon Biologics, we developed a formulation development platform for rapid formulation screenings for MAbs. Our approach consists of screening studies for pH and excipients followed by in-depth evaluation of buffers and excipients.

Stage One Screening Study to Identify the Optimal pH: We begin by formulating a MAb in a citrateā€“phosphate mixture at different pH levels. Within the normal pH range, citrate has an acid-dissociation constant (pKa) value at 4.8 and 6.4, and phosphate has a pKa at 6.8. The mixture of the two buffering salts allows us to control pH well in the range of 4ā€“8. Because all these formulations have the same buffer composition, the effect of buffer types on MAb stability is eliminated. We stress our formulations at 50 Ā°C for a week and analyze by potential stability-indicating methods. We studyĀ appearance, measure subvisible particles (e.g., using a HIAC particle counter from Beckman Coulter), and apply several assay methods: differential scanning calorimetry (DSC) (e.g., using a MicroCal VP-DSC capillary DSC system from Malvern Instruments), sodium dodecyl sulfate-polyacrylamide gel electrophoresis (SDS-PAGE), binding enzyme-linked immunosorbent assay (ELISA), and size-exclusion and cation-exchange high-performance liquid chromatography (SEC-HPLC, CEX-HPLC). Thus we select optimal pH conditions for each MAb. We also evaluate each analytical method for its ability to detect MAb degradation. Only sensitive stability-indicating methods will be used in subsequent studies.

Stage Two Screening Study to Pick Out Stabilizing Excipents: Using the pH selected above, we select up to two buffers for this study. For example, if the target pH is 6, then we use both histidine and citrate based on their pKa values.

We also choose one or two excipients from each category identified above. For example, we might add sucrose (from the polyol/ disaccharide family), polysorbate 80 (from the surfactant family), glycine and arginine (from the amino acid family), sodium chloride (NaCl, a salt), and methionine (from the antioxidant family) to the buffer(s) forĀ study in this step. We typically use a screening design of experiment (DoE) study. At the end of the screening study, one or two stabilizing excipients and buffers are selected for the next stage of formulation development.

Stage Three In-Depth Evaluation of the Most Stabilizing Buffer(s) and Excipient(s): We use a response-surface methodology (RSM) DoE study to explore the optimal excipient concentration and interactions among excipients. And we run another one-week thermal stress study at 50Ā°C. The MAb is formulated at a target concentration and filled into the intended vial/stopper system to mimic a final-product configuration. By the end of this study, we will have chosen a final lead formulation. MAbs are typically stable over freezeā€“thaw cycles and agitation in most formulations. Nevertheless, we will also confirm the lead formulationā€™s stability over freezeā€“thaw and agitation.

Turnaround time for this rapid yet rational and relatively comprehensive approach is about 12 weeks. We have successfully used the platform approach to formulate several MAb products. 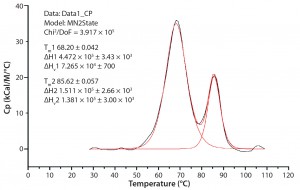 Figure 1: A typical differential scanning calorimetry (DSC) thermogram for a monoclonal antibody (MAb) showing the enthalpy change; the major peak is caused by unfolding of both the Fab part and CH2 domain, and the minor peak is unfolding of the CH3 domain.

A Case Study
We applied our approach and successfully developed a 100-mg/mL liquid formulation for a clientā€™s MAb.Ā Through the above-described studies, we identified its optimum pH to be pH 6. We also narrowed down the buffer and excipients.

Next, we performed a DoE study based on previous results with the MAb formulated at pH 6.0 and 100Ā mg/mL. Using an integrated optimal (I-optimal) experimental design, we studied excipients comprising 10ā€“50Ā mM histidine, 1ā€“2%Ā trehalose, and 10ā€“50 mM phosphateā€“citrate buffer. Based on known protein unfolding onset temperatures obtained from DSC in the screening study (Figure 1), we used 45 Ā°C as the thermal stress temperature for this product, extending the incubation time to 14 days. 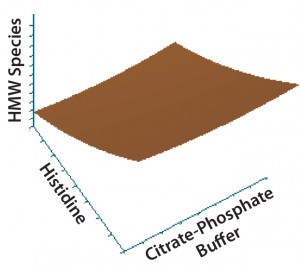 Figure 2: Contour plot of the effects of histidine and citrateā€“phosphate buffers on highā€“molecular-weight (HMW) species 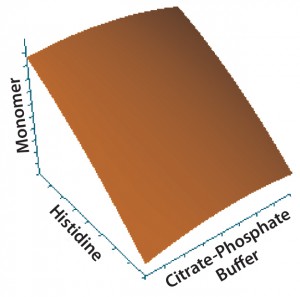 Figure 3: Contour plot of the effects of histidine and citrateā€“phosphate buffers on monomer content 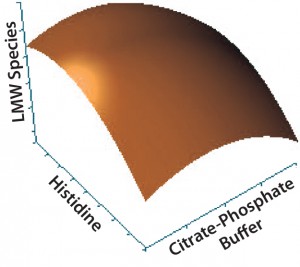 Figure 4: Contour plot of the effects of histidine and citrateā€“phosphate buffers on lowā€“molecular-weight (LMW) species 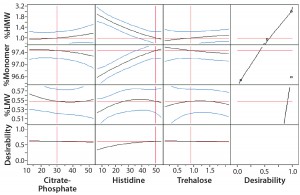 Statistical analysis of second-stage data (Figures 2ā€“5) demonstrated that neither citrateā€“phosphate nor trehalose concentrations significantly influenced this MAbā€™s stability. Histidine had a substantial positive effect in inhibiting the formation of
aggregates (p = 0.0006) but an insignificant effect on protein fragmentation (p = 0.1231). Within the tested range (10ā€“50 mM), higher concentrations of histidine provided better protein stability. So we selected a histidine-containing formulation and performed a 24-month real-time stability study. Figure 6 shows the resulting data for this 100-mg/mL MAb formulation. 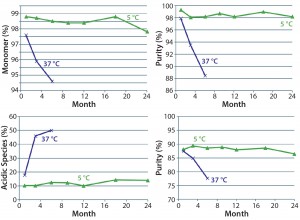 Stability study results from chosen assays demonstrated that the antibody had long-term stability in this formulation. We developed the formulation within just 12 weeks through this platform formulation development approach.

A Strategic Approach
Based on an analysis of 37 commercial MAb formulations along with our own extensive experience, our team at Patheon Biologics established a rapid platform formulation-development strategy for MAbs. This three-step process begins with pH screening followed by excipient screening, and concludes with a more in-depth evaluation of the best stabilizing buffer(s) and excipient(s). In just a few weeks, researchers can develop a stable formulation for MAb product development.